Tom Brokaw Blames the Shooting Rampage in Omaha on Blogs 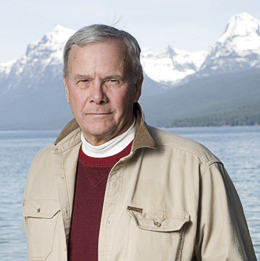 ” … it’s what they read in blog sites, and what they see in video games. It’s that kind of stuff that I think is cancerous. … ”

Back in 1995, I managed a mall-based Software Etc for a year in Omaha, Nebraska — guess which mall. That’s right, Westroads, nestled betwixt some of the wealthiest homeowners (among them, billionaire Warren Buffet) and a bunch of pretty typically middle-class neighborhoods, banks, gas stations, retail stores, car dealerships, hotels, and a sports bar I used to play weekends in a cover band on keys.

On Wednesday, wearing a hooded sweatshirt concealing an assault rifle, 19 year old Robert Hawkins walked into Von Maur, a two-story department store located on the south side of the Westroads (a ten second stroll from the store I used to manage, now a GameStop), shot and killed six store employees, two customers, then turned the gun on himself.

There’d been shootings at this particular mall before, mind you. Mostly minor incidents involving kids flashing or firing guns, all attributed to gang-related activity. This was back in the early 1990s, when Omaha actually made the cover of Time magazine for its gang problems, and violent crime (all types) in the U.S. was peaking. For the record, despite all the disproportional and unrepresentative 24-hour cable network news reporting, violent crime (all types) has been steadily declining every year in the U.S. since 1991.

Tom Brokaw isn’t the kind of guy you mock lightly, but in a Townhall radio interview with American radio talk show host and neo-conservative evangelical Christian Hugh Hewitt, he reacted to the shooting with the sort of typical generationally challenged punditry that makes game hobbyists like me wince.

HH: Do you not think it’s going to incite other people to try to do the same thing?

TB: No, I don’t. I think…to get back to something we were talking about earlier in general thematic terms, I don’t think we’re doing a very good job about talking about violence in this country, either. You know, Virginia Tech went away. We didn’t have any ongoing dialogue in our communities or on the air about the corrosive effect of violence. It was not what he, what people saw of him on the air that will drive them, it’s what they read in blog sites, and what they see in video games. It’s that kind of stuff that I think is cancerous. And I’m a free speech absolutist, but I think that at the same time, we have to have free speech in some kind of a context. And part of that context is a discussion of the possible effects of it.