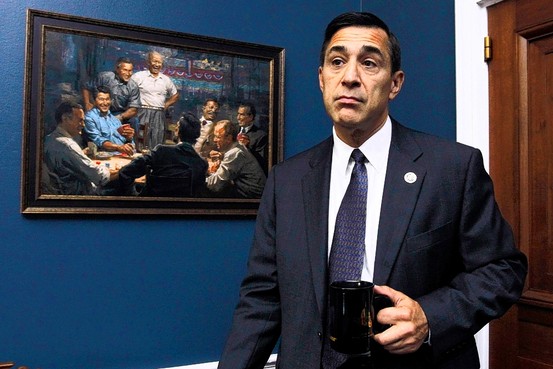 March 2, 2011--Recently disclosed documents are raising troubling questions about past actions of Congressman Darrell Issa (R-San Diego). Watchdog groups have put the new Chair of the House Committee on Oversight and Government Reform in the hot seat as they look to discredit Issa’s integrity to hold this powerful position.

Newly publicized documents, that are nearly 30 years old, make up the exposé entitled “The Issa Files.”  A series of document releases is divulging new details of past incidents involving one of the most powerful men in Washington. Beginning with the release of the “Issa Fire Files,” on February 14, and followed by the “Issa Grand Theft Files” on February 23, Issafiles.com or The Third Lantern researchers have taken it upon themselves to expose potentially damaging skeletons in Congressman Issa’s closet.

The first batch of files that were released, the “Issa Fire Files,” suggest that a 1982 fire that took place at Issa’s Ohio based company, Quantum Enterprises, Inc., was arson—and that Issa stood to profit from the blaze. The files are a collection of witness reports, interviews, and various other reports that have previously not been made public. According to the organization these files uncover the truths that the Congressman tries to hide.

Questions have been raised by the organization about Issa’s knowledge of the fire, possible involvement, and financial gain. The “fire files,” contain depositions of past employees, with one making the claim that Issa started the fire for insurance money. In the conclusions of P.A.C.E. (Professional Analytical and Consulting Engineers), “This type of low burning over a large area also confirms that this was not an accidental fire.”

In an open letter to the Congressman, The Third Lantern, asked for clarification on why Rep. Issa increased his insurance over $300,000 shortly before the fire, why he supposedly, waited nearly 10 minutes to contact the fire department about the inferno, and why he settled for just $20,000 after originally suing the insurance company for $175,000.

The “Grand Theft Files,” reveal a grand theft complaint involving a 1979 Mercedes against the Congressman in San Jose. The charges brought against him were eventually dropped, but The Third Lantern has publicized these documents in an attempt to highlight the past missteps of the Congressman. Issa has also previously been implicated in other alleged car thefts before starting the Viper Car Alarm company that helped make him the richest man in Congress.

“The Issa Grand Theft File gives the American people a revealing peek into his past and question whether he is ethically fit to be the top investigator in Congress," said Ace Smith, president of the Third Lantern in a press release.

“Congressman Issa owes us an explanation of the things he did do for which he didn’t get caught, things that are ‘balanced out’ against allegations of auto theft and arson. Then we can decide whether he is qualified to represent us in Congress any longer,” said David Morrison, Co-chairman, Green Party of San Diego in a recent editorial published by the San Diego Union-Tribune.

ECM asked the Congressman to comment on the documents released. His spokesman at the time, Kurt Bardella, replied in a written statement: “The American people are not interested in this kind of destructive, politics-as-usual attack that only serves to advance an agenda of divisiveness and pettiness. At the end of the day, these political consultants will do whatever they are going to do, but it just flies in the face of what the American people are interested in hearing about.”

Asked why the Congressman would not simply deny the claims, if they were false, Issa’s office did not respond.

Bardella has since been fired by Representative Issa after allegations arose that he had improperly shared e-mails with a New York Times reporter. According to a statement from Rep. Issa, the firing was not because of the content of the e-mails, but because of Bardella’s cooperation with NYT reporter Mark Leibovich, who is currently working on a book about the political world in Washington. Whether Leibovich’s upcoming book will include new details on the Issa allegations is unknown.

The Issa files and allegations are coming to light at a crucial time for the Congressman, as he begins issuing subpoenas of the Obama Administration. This week Issa issued subpoenas to employees of Department of Homeland Security for questioning about its policies and procedures pertaining to the Freedom of Information Act. Last week saw the Congressman flex his power by issuing subpoenas to Bank of America for information pertaining to Countrywide Financial’s “Friends of Angelo” program.

As the Chair of this powerful committee, Congressman Issa now has the power to subpoena whoever he wants within the government. His power to investigate fraud, waste, and abuse within the government gives him a prominent position in the GOP’s charge against the policies of President Obama.

As these potentially damaging files come to light, questions are also being raised about the organization providing these seemingly forgotten documents. Formed after Issa took over as the Chair of the House Committee of Oversight and Government Reform, The Third Lantern, which operates out of San Francisco and Los Angeles, labels its founders as concerned and proud Californians that aim to warn fellow patriots about the “new threat to democracy (Rep. Issa’s investigations).”

“It’s beyond hypocritical for the very people embarking on this misguided and distasteful smear campaign against Chairman Issa to refuse to disclose where their funding is coming from. It makes you wonder what they have to hide?” said Bardella.

But Issa critics have contended that it is hypocritical for Issa to accuse those poking into his own past of having a partisan motive while he is actively issuing subpoenas to discredit the Obama administration. On a visit to San Diego last year, Democrat. Edolphus Towns, outgoing chair of the House Committee of Oversight and Government reform, said that Issa “would subpoena every cockroach and rat” in an effort to impeach President Obama.

Third Lantern spokespearson Jeff Millman insists that the organization is complying with the law. Asked if not disclosing funding could discredit the organization and its information, Millman responded, “Our sole focus is on the conduct of Congressman Issa.”

Regardless of political motivation, Third Lantern has produced large volumes of evidence documenting claims that raise serious questions about both the Congressman’s past and his integrity. While his accusers may be partisans, the decades-old records from law enforcement, insurance investigations and witness statements--made long before Issa held public office--have no such partisan taint.

Those interested in reading more about the past exploits of San Diego’s most powerful Congressman can visit www.issafiles.com and www.issawatch.com .