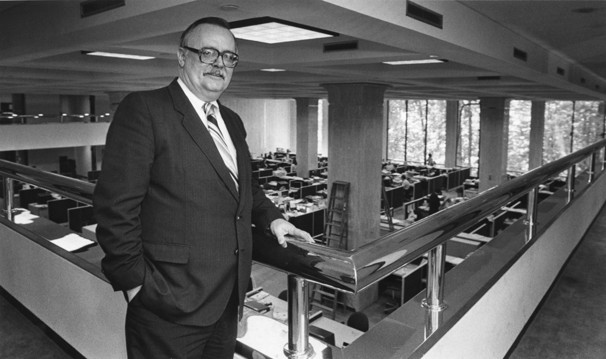 When James Whelan left Sun Myung Moon’s Washington Times in 1984, he regretted his role in the growth of the ultra-con propaganda sheet, confessing: “I have blood on my hands.”  But the blood began to stain him before his stint at the Times, when he worked for the Sacramento Union under CIA “Mockingbird” publisher Richard Mellon Scaife. Whelan learned the fine art of propaganda under Scaife, qualifying him for employment by the Unification Church.

He was succeeded at the Times by former Newsweek reporter Amaud de Borchgrave.

Ronald Hilton at Stanford’s World Association for International Studies (WAIS) Forum wrote in 1999 that Whelan was a “friend” of the CIA, “which he defends vigorously.  He knew many top CIA people, and was a ‘trusted advisor’ of President [GHW] Bush.”  Whelan, who played a public relations role in the CIA/ITT overthrow of Salvador Allende, “objects to the Hollywood representation of [the Agency] as a clique of spies which the American public should mistrust.”  More blood on his hands …

James R. Whelan, the founding editor and publisher of the Washington Times who became a fierce critic of the newspaper’s Unification Church owners after his abrupt dismissal, died Dec. 1 at his home in Miami. He was 79.

He had multiple organ failure, said his nephew Bill Halldin.

Mr. Whelan had a wide-ranging journalistic career and was editor of the Sacramento Union, then owned by conservative billionaire Richard Mellon Scaife, before he joined the Washington Times at its creation in 1982. The Times is owned by an offshoot of the Rev. Sun Myung Moon’s Unification Church, a religious group that claims millions of followers but is often described as a cult.

Mr. Whelan was aggressively courted for the top editorial job by Bo Hi Pak, the president of News World Communications, the church’s publishing unit. Mr. Whelan said that he initially was reluctant to take the position but that he believed in the need for the new publication, which was billed as a conservative alternative to The Washington Post.

“I don’t know anyone in the New Right who hasn’t felt this sense of desperation and frustration over the absence of a voice in Washington,” Mr. Whelan told The Post at the time.

Mr. Whelan was reported to have secured a contract that guaranteed his editorial control of the newspaper, which at the time had a circulation of about 100,000. He was removed two years into the job.

In public remarks after his ouster, Mr. Whelan said the paper was “firmly in the hands of top officials of the . . . Unification Church Movement” and that “a covenant of independence has been irreparably breached.”

He subsequently worked for the Christian Broadcasting Network as news director and as an editor with a Latin American news service. He retired in the early 1990s but continued writing until shortly before his death.

In the early years of his career, in addition to two years of Army service, he worked for the United Press news service and its successor, United Press International, as a correspondent in the United States and in Latin America. He also was a reporter with the Scripps Howard news service.

Mr. Whelan was a 1967 Nieman fellow at Harvard University and received a bachelor’s degree from Florida International University in 1975.

In the 1980s and early ’90s, he wrote several books, most of them on Latin American issues. He lived for several years in Chile, where he taught at the University of Chile, before returning to Miami in 2008.