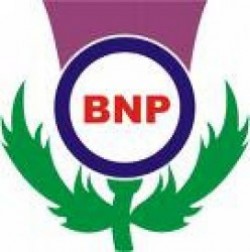 Staying vigilant against the fascists in Stoke
by Anindya Bhattacharyya

The fascist British National Party (BNP) has called off its planned national rally in Stoke-on-Trent on 9 August. But anti-Nazi activists are remaining on the alert in case the BNP hold their Muslim-bashing event in the city later that month. BNP leader Nick Griffin had vowed to use Stoke as a launching pad for a campaign against Muslims to coincide with the sentencing of Habib Khan, who was convicted earlier this year of the manslaughter of Nazi thug Keith Brown.

Habib Khan’s sentencing has now been delayed to 29 August, prompting fears that the fascists may hold their rally on that date instead. They plan to bring in Nazis from around to country and tour estates where they have a presence. If the BNP do mobilise in Stoke, local anti-Nazi campaigners will call a protest against them. Unite Against Fascism is also holding a day of action against the BNP in Stoke this Saturday 26 July.

Some people on the left have described Brown’s death as “tragic” and tried to present him as a victim of “knife crime”. But Brown does not deserve an ounce of sympathy from anyone. He was a BNP activist who subjected Khan, his neighbour, to a four-year campaign of racist abuse and violence.

Brown died on 6 July last year during a scuffle with Khan and his son Azir Saqqidue. Khan says Brown attacked Azir outside their home. He went to his son’s aid carrying a kitchen knife – which Brown backed on to, wounding him fatally. Last May a jury cleared Khan of murder, finding him guilty of manslaughter by reason of lack of intent. But the BNP is pressing ahead with its plans to present Brown as a “white martyr” and a “victim of Islamic jihad against Great Britain”.

Michael Coleman, the BNP’s organiser in Stoke and one of its nine councillors, reacted to Khan being cleared of murder by telling reporters, “We advise anyone who gets angry to get involved with the BNP.” Ever since 9/11 the BNP has exploited the climate of officially sanctioned Islamophobia to mount a “crusade” against Islam. It is vital that everyone on the left recognises this as racism. We need to unite in defence of Muslims and in opposition to the fascist threat.

Plans by the fascist British National Party (BNP) to hold a meeting in Sheffield last week were scuppered after protests by anti-Nazi campaigners. Southey Social Club decided to cancel the BNP’s booking after being inundated with angry phone calls from members of the public.

Sheffield Unite Against Fascism (UAF) planned to hold a demonstration outside the meeting if it had gone ahead. Councillor Jackie Drayton was one of the protesters who spoke out against the fascists in the local press. Her name and contact details were posted up on the BNP’s national website. She received a series of abusive emails from outraged Nazis, some of which threatened her children and grandchildren.

“They are not going to quieten me with their bully boy tactics,” she told the Sheffield Star.

Meanwhile trade unionists and anti-fascist campaigners are gearing up to protest against the Nazi BNP’s annual “Red, White and Blue” hate-fest, which is due to take place in Codnor, Derbyshire, on 16 August. Coaches will be travelling to the protest from Leicester, Derby, Nottingham and Chesterfield. More details will be posted on the UAF website as they become available.

Anti-fascist campaigners will also be heading to Stoke-on-Trent this Saturday for a day of action against the Nazi BNP.

Copyright Socialist Worker (unless otherwise stated). You may republish if you include an active link to the original and leave this notice in place.