" ... It would certainly serve the interests of the powerful if professional journalists were muted – or replaced as navigators in our society by bloggers and bloviators. ... " - Rupert Murdoch

News Corp boss portrays himself as a rebel with a cause ... 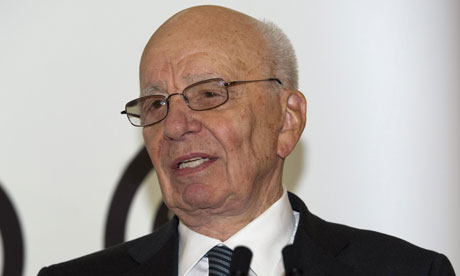 The gathered clan laughed nervously when Lord Saatchi, their host, declared that Britons now spent more on Sky TV subscriptions than they did on bread. When the other man on the stage smiled, the audience relaxed. To understand Rupert Murdoch's grip on British public life it is instructive to see the body language when the elite comes together. I counted at least five Conservative cabinet ministers among the great and good in the ornate surroundings of Lancaster House for the inaugural Margaret Thatcher lecture on Thursday.

The timing was equally pertinent. Murdoch's speech, entitled Free Markets and Free Minds, came the day after the Comprehensive Spending Review that sought not just to tackle the budget deficit but to complete Thatcher's unfinished business of reducing the size of the state and unleashing the private sector.

Concerns over Thatcher's health could not mask a celebratory mood among News Corporation executives who, in just a matter of days, have seen the BBC's budget cut by 16% and Ofcom denuded of staff.

Murdoch, even now, continues to portray himself as the rebel with a cause. "I am something of a parvenu," he said. At each step of the way, he had taken on vested interests – whether trade unions at Wapping or other "institutions hungry for power at the expense of ordinary citizens". He argued that technological change was leading to a new "democracy … from the bottom up". A free society, he said, "required an independent press: turbulent, inquiring, bustling and free. That's why our journalism is hard-driving and questioning of authority. And so are our journalists."

Such a laudable commitment to free expression sits uneasily with his company's dealings in countries with dubious civil liberties records, notably China, where his business interests invariably trump journalistic inquiry.

Murdoch suggested that traditional mediated journalism remained the only serious constraint on elites. "It would certainly serve the interests of the powerful if professional journalists were muted – or replaced as navigators in our society by bloggers and bloviators." Bloggers could play a "social" role but this had little to do with uncovering facts. In saying this, Murdoch was doing more than justifying the Times' and Sunday Times' internet paywall. He appeared to be echoing the views of the New Yorker columnist Malcolm Gladwell, and others who argue that social media and blogs are not speaking truth to power in the way their advocates proclaim.

When tackling the most controversial areas, Murdoch moved from unequivocal statement to hints. The words "Andy" and "Coulson" came immediately to mind when he stated: "Often I have cause to celebrate editorial endeavour. Occasionally I have cause for regret. Let me be clear: we will vigorously pursue the truth – and we will not tolerate wrongdoing." One News Corp executive suggested afterwards that this was the closest Murdoch had come, and would come, to apologising for the phone-hacking affair.

The official line is that no senior figure knew about the practice at the News of the World. Coulson, who is now director of communications in Downing Street, resigned as the editor when the paper's former royal editor, Clive Goodman, was jailed in January 2007. Intriguingly, a senior Murdoch executive told me after the speech: "If Coulson hadn't quit, he would have been fired". If that is the case, why do they continue to insist publicly that Coulson had done nothing wrong and had fallen on his sword only to protect the reputation of the company?

The other unspoken drama in the room was Murdoch's bid to take full control of BSkyB and the campaign of resistance by an alliance of newspaper editors and the BBC, who are urging Vince Cable to block the deal.

Murdoch said the energy of the iconoclastic and unconventional should not be curbed, adding: "When the upstart is too successful, somehow the old interests surface, and restrictions on growth are proposed or imposed. That's an issue for my company."

The assembled ministers will have taken note. Just as the Labour government kowtowed at every turn, so the coalition – and Cable in particular – will be scrutinised closely by News Corp to ensure that it does the decent thing.

John Kampfner is the chief executive of Index on Censorship