The Murder of Archbishop Romero: ‘God with a .45’ Flees Fellow Plotters 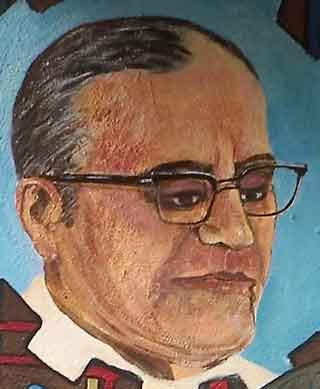 When I embarked six years ago into investigating the killing of Salvadoran Archbishop Oscar Romero, I didn’t know I was not beginning to work on a story, but taking a trip to the darkest era in modern Salvadoran history, guided by one of its cruelest perpetrators.

Captain Alvaro Rafael Saravia, the confessed plot coordinator, was the right-hand man of Roberto D’Aubuisson, a prominent member of the World Anti Communist League and the founder of ARENA, still one of the main political parties in El Salvador. D’Aubuisson showed up frequently on television reading lists of his enemies. People on the list would generally disappear.

D’Aubuisson was a former student at the School of the Americas, the Fort Benning, Ga., facility that trained Latin American soldiers and police officers. He and Saravia represented the visible part of a complex structure, with members at all levels of the security forces, trained by expert South American and Central American officers. The structure was financed by rich Salvadoran businessmen, some of them living in the United States.

And it was they who were responsible for the plot to kill Archbishop Romero, an assassination that ignited the Salvadoran civil war, a conflict that left about 100,000 people dead.

Captain Saravia played God with a .45 caliber gun, sleeping in big houses where cocaine, women and alcohol were provided by the owners, wealthy businessmen. Captain Saravia coordinated, on March 24, 1980, the killing of Archbishop Romero and even went to the church where Romero was delivering Mass to see for himself how the bishop was killed.

Thirty years later, Saravia is a diminished old man, abandoned by his peers, living undercover and in misery, working as a peasant in remote lands, hiding himself in the poorest corners of Central America. He has lost his family and his name.

No Central American tribunal is looking for him, but still he hides. He knows too much. He is afraid not of justice, but of his former peers.

He is the only one ever tried in connection with the killing of Monsignor Romero.

In 2004, a civil trial was held in Saravia’s absence in Fresno, Calif.  He was the first person ever found culpable of crimes against humanity for the killing of a single person. By then, Saravia was already on the run. His punishment in the end is to live like most Central Americans: in poverty, without any state structure that can guarantee food, shelter, security, justice.

If he had seen this coming, he told me, he too would have been a revolutionary.

Then why had he been a prominent member of D’Aubuisson’s structure? Because he was trained to do that, he says. Because in the army they tell you that the communists are the enemy. And who is a communist? Everyone. And then you act accordingly. The banality of evil, you might think.

Journalists and scholars have failed so far to adequately investigate the structures behind the killing squads. Not only at a local level — where it involved soldiers, police officers, army officers and wealthy businessmen — but also at a regional and even global level.

According to State Department declassified documents, there was a group of wealthy Salvadorans operating from Miami called the Miami Six who were actively involved in financing death squads in El Salvador and ordering selective killings, bombings and terrorist acts.

Two of the Miami Six founded an organization called the Freedom Foundation and hired a lobbying group to put a benign face on their activities. In the work agreement with the Miami Six, the lobbyists stated:

“American opinion about El Salvador is shaped more by sensationalist journalists who headline the massacre of American nuns and photograph Salvadoran military excesses than it is by knowledge of the significant effort of the private business sector to respond to the legitimate aspirations and interests of the Salvadoran people.”

One of the Miami Six still owns a newspaper in El Salvador.

After I published the story on Archbishop Romero’s murder in March this year, he called my work a piece of sensationalistic journalism. It is our duty to do a better job uncovering the networks that brought repression, torture and systematic disappearances and killings in Latin America.

Perhaps the biggest compliment I have ever received came from a former target of the death squads. This man – a politician who suffered persecution and death threats, who had to leave the country because he was on the list of the death squads, who saw many friends disappear – called me with a sobbing voice after I published a story on Romero.

“Thanks,” he said. “Those monsters … you just made them so small.”

We don’t have death squads anymore. But now we have gang members, crazy and full of tattoos. Or fat drug dealers with mustaches and sombreros in big trucks who kill immigrants because they refuse to become hit men. Such is the cartoon of the new victimizers. Such are the new unknown executioners. And some death-squad killers would turn pale at the extreme cruelty inflicted upon some of the bodies found every day in clandestine graveyards.

We don’t have another 30 years to get to know the new organized criminals and their networks. We must start right now.