Liberal Democrat Chris Huhne pulled no punches last week as he accused David Cameron of jumping into bed with ‘wackos and weirdos’ from a Baltic political party that ‘celebrates Hitler’s SS’.

But as applause rang out for the Shadow Home Secretary’s speech at the party’s conference in Bournemouth, one high-profile colleague was keeping out of the limelight.

For fellow Lib Dem MP Lembit Opik’s great-uncle Oskar was a senior member of a Baltic puppet government during the Nazi occupation and was accused of collaboration in crimes against humanity.

In [a] picture he is shown being sworn in as the politician in charge of the court system and some jails under the country’s pro-Nazi ‘directorate’ which operated under German supervision during occupation from 1941 to 1944.

It is not clear if Mr Huhne had looked at Lembit Opik’s complicated family tree and
its Baltic roots before opening his mouth last week. His speech was meant to embarrass Mr Cameron over his decision for his party to join the European Conservative and Reformist group in the European Parliament.

The group has been criticised for having MEPs from Latvia whose members have celebrated the Nazis, condemned homosexuality and claimed the election of black US
President Barack Obama signalled ‘the end of civilisation’.

Mr Huhne said: ‘Dave’s dumped the Tories’ long-term allies to jump into bed with the wackos and the weirdos. He says he cares about human rights, but cuddles up to a Latvian party that celebrates Adolf Hitler’s Waffen SS.’

As an MP, Lembit Opik, 44, has found notoriety for his string of glamorous girlfriends. 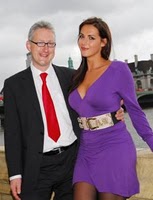 He was engaged to TV weathergirl Sian Lloyd and Cheeky Girl Gabriela Irimia and says he is ‘very, very good friends’ with underwear model Katie Green, 21.

It is less well known that at the end of the Second World War his family had fled Estonia – the neighbouring country to Latvia – and settled in Northern Ireland.

During Nazi occupation, Oskar Opik was deputy head of the Society of Friends of the Estonian Waffen SS-Legion.

In an oath declared when he was sworn in to his puppet post, he vowed: ‘I swear by God this sacred oath in the battle against Bolshevism, I will render unconditional obedience to Adolf Hitler, the Supreme Commander of the German Armed Forces, and as a brave soldier will be ready at any time to give my life for this oath.’ 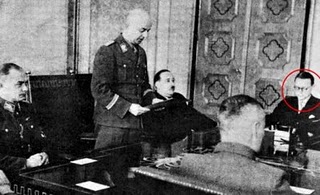 Official role: Oskar Opik, circled right, being sworn in as a member of the Nazi 'directorate' in 1943

A post-war Estonian investigation into crimes against humanity named Oskar Opik as one of eight officials who ‘share responsibility with the German authorities, by virtue of their office, for all criminal actions carried out in Estonia, and beyond its borders by military units or police battalions raised with their consent during the period of the German occupation’.

He and the other directors were ‘responsible by virtue of the positions they held, for having given orders which resulted in crimes against humanity’.

Oskar Opik always denied having any jurisdiction over political prisoners. But the Estonian International Commission for the Investigation of Crimes Against Humanity stated that ‘the directorate’s autonomy, in particular, enabled them to maintain police structures that co-operated with the Germans in rounding up and killing Estonian Jews and Roma, and in seeking out and killing Estonians deemed to be opponents of the occupiers’.

Some 5,000 Jews were shot, ‘their bodies stacked on pyres and burned’ at Jagala and Klooga camps in Estonia, according to the commission’s report. In addition around 6,000 ethnic Estonians, 1,000 gypsies and 1,000 Russians perished during the occupation. Another 15,000 Soviet prisoners of war also died.

The directorate of which Oskar was a key part was also found to be responsible for exacerbating ‘the unlawful conscription of Estonians for forced labour or for military service under German command’.

Members of the Opik family in Estonia – their homeland before Lembit’s branch – have stressed there was no direct evidence against Oskar that could find him guilty in a court of law.

They also argue the commission did not amount to a judicial body.

Many Estonians and Latvians still maintain that the Germans were the lesser of two evils compared to the Soviets, despite the Nazis’ use of concentration camps to murder Jews from other East European countries.

After the war, Oskar Opik justified his Nazi collaboration by saying Estonia needed ‘a robber to save us from a robber’. He claimed his support for the Nazis was an attempt to give his country some kind of post-war independence rather than the subjugation under the Soviets which, in the event, occurred.

As the Red Army advanced on Eastern Europe in 1944, the Opik family fled. Lembit Opik’s branch made their way via displaced persons camps in Germany to Northern Ireland.

Oskar Opik at first found a haven in Spain. But at the end of his life he joined his brother Ernst, a world-famous astronomer and Lembit’s grandfather, in Ulster, where he died in 1974.

Ernst died 11 years later and the two men are buried alongside each other in Armagh.

Before his speech last week Mr Huhne had also been planning to attack Shadow Foreign Secretary William Hague as a ‘skinhead who has toured the beer cellars of central Europe, and has come up with the dregs’. But he was talked out of it at the last minute.