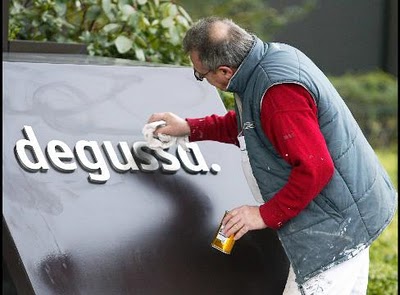 A worker polishes the Degussa logo

The German chemical company Degussa is suffering its share of legal headaches: “… [concentration] camp survivors say Degussa AG helped the Nazis produce gas used in death camps and processed extracted gold dental fixtures into marketable gold. The case against Degussa also alleges that the firm was the co-owner of another company, Degesch, which produced the Zyklon-B cyanide tablets used to gas hundreds of thousands of camp inmates. …”

June 29 (Bloomberg) — Executives at Degussa AG, the world’s biggest specialty chemicals maker, in 2002 blew the lid off a six-year-old conspiracy to fix the price of hydrogen peroxide by handing over proof of its own involvement in the scheme.

That revelation allowed the German chemical maker, which had already been penalized for other antitrust violations, to avoid another 130 million-euro ($175 million) penalty for its wrongdoing.

Degussa is one of several companies learning that confessions are good for the soul — and the bottom line. Cartel targets such as brewer InBev NV and drugmaker Bayer AG have also taken advantage of a European Union program to waive fines for the first company to come clean in a price-fixing cartel.

Companies have to “do the analysis very quickly,” said Tom McQuail, an antitrust lawyer at Howrey LLP in Brussels. “You might not have too much time.”

Since 2002, the Brussels-based commission has attracted dozens of companies to turn on fellow participants in cartels with the leniency program. EU Competition Commissioner Neelie Kroes has used the policy as part of a cartel crackdown that has led to a record 2 billion euros in fines so far this year.

The first company to alert the EU of price fixing gets full immunity. The information must have details on products, meetings and prices, and result in raids. Companies that submit subsequent leniency requests can get reductions of as much as 50 percent.

“There’s been a significant increase both in the number of cartel decisions and the punishment meted out to the companies for the infringement,” Kevin Coates, a commission official who advises the competition department, told lawyers at a recent conference. “To a large extent this is due to the success of the commission’s leniency program.”

InBev, the world’s largest brewer by sales, in April avoided fines for fixing the price of beer by being the first company to tell the EU about a cartel in the Netherlands. Heineken NV, Bavaria NV and Royal Grolsch NV were fined a total of 274 million euros.

Degussa’s disclosures in December 2002 led to fines totaling 388 million euros against seven companies that had colluded to set the price of hydrogen peroxide.

At that time, Dusseldorf, Germany-based Degussa, which was acquired last year by RAG AG, had already been fined for several cartels, including a protein used in animal feed and organic peroxide, decided to avoid more penalties.

After Degussa exposed the cartel, EU inspectors raided other companies, searching file cabinets and computers for evidence of price fixing. The actions sparked a race by other members, including Belgium’s Solvay SA and France’s Atofina, to help investigators to reduce their fines.

On April 3, 2003, nine days after a raid, a Solvay lawyer called the commission and said the company intended to turn in evidence of price-fixing for two bleaching chemicals, according to a commission ruling in the case.

A few hours after the call, at 3:50 p.m. in Brussels, lawyers for French chemical maker Atofina, now called Arkema SA, sent a fax with 13 documents. It won a 30 percent reduction in its penalty. Solvay, which only received a 10 percent cut, was fined 167 million euros in May 2006, the largest penalty.

Both companies didn’t know they had already been beat. Akzo Nobel NV unit EKA Chemicals was the second company to apply for leniency and got a 40 percent fine reduction, according to the ruling.

Solvay is appealing the fine and the commission’s decision to grant Atofina a bigger discount at the European Court of First Instance, the EU’s second-highest court.

The company argues that its application on April 3 provided “significant added value” to EU inspectors, the main criteria for judging whether a leniency application is accepted.

The case prompted the commission to revise the leniency policy. Last December, it introduced a “marker” system for leniency applications. A company applying for immunity is assured that its place as the first whistle blower is reserved while the commission reviews the evidence even if it hasn’t provided sufficient information about the cartel.

The downside is that companies aren’t guaranteed that they’ll be shielded from fines and the commission has the discretion to reject applications as being incomplete.

Critics of the new system, including Julian Joshua, a lawyer who spent 27 years at the commission before joining Howrey in Brussels, said companies should have more certainty.

“Although the commission says they won’t consider another application, if they deem that yours isn’t complete, the other cartel members could leap in front of you,” Joshua said.

U.S. authorities automatically grant immunity if companies tell them about a cartel. In the EU, companies are expected to provide detailed evidence.

Kroes’s fines — she levied 1.84 billion euros in 2006 –and the leniency policy, are working. More companies are blowing the whistle on co-conspirators and the increased case load has commission considering settlements with cartel violators.

“Settlements would allow the commission to deal with cases more swiftly because it will provide for a faster and more stream-lined decision-making process,” Kurt Haegeman, an antitrust lawyer and partner at Baker & McKenzie in Brussels, said in a phone interview.

Kroes has made no secret that her priority is fighting cartels, saying she’s waging a “war” against price fixing. She approved new guidelines for setting fines that will lead to higher penalties, particularly for repeat offenders.

“I want the future for cartelists to continue to look as bleak as possible,” Kroes said in a March 8 speech in Brussels.

To contact the reporter on this story: Matthew Newman in Brussels at Mnewman6@bloomberg.net .
Last Updated: June 28, 2007 19:07 EDT