Note on the Pope and Hitler 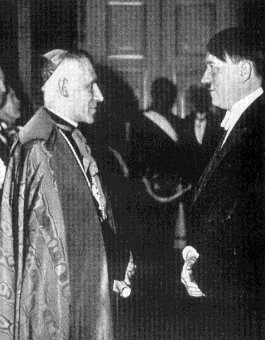 The truth about the Pope and Hitler

“News that Cardinal Cormac Murphy-O’Connor, Archbishop of Westminster, hopes to attend the launch of an eagerly awaited biography of Pope Pius XII by Gerard Noel will raise eyebrows. The Pope is a complicated figure, often accused of collaborating with the Nazis. ‘My book will argue that in signing a concordat with Nazi Germany, Pius XII enabled Hitler to come to power,’ says Noel. ‘However, the Pope didn’t like Hitler. His motives were political.’ The author adds that Ronald Harwood has expressed interest in turning it into a film. In the hands of the man who won an Oscar for The Pianist (about a musician pursued by the Nazis), it could make for a fascinating movie.”

Previous Article
Bush Family Cooperated with Hitler and bin Laden
Next Article
UK: “My Grandad was a Nazi Sympathiser”

UK: “My Grandad was a Nazi Sympathiser”
May 10