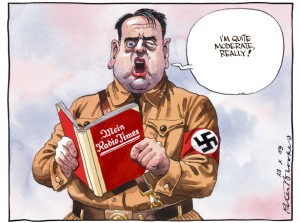 UK’s Conservative Party is being criticized for the poor choice of its European allies, some of which never miss an opportunity to parade around in the uniforms of Nazi Germany.

On Tuesday, the Latvian capital of Riga saw hundreds of former Nazi SS veterans parading in a controversial commemoration march.

Despite widespread opposition and counter-rallies, almost 2,000 supporters took to the streets to honor those who died fighting on the German side during World War II.

The rally was staged by the For Fatherland and Freedom party, which is also a member of the European Conservatives and Reformists (ECR) group within the European Parliament.

This, in turn, has triggered criticism of the UK's Conservative party, which recently realigned itself with the ECR.

“They [the conservatives] don't want to sit at the same table with the traditional center-right parties of Europe, so they had to find some new allies. So they got into bed with some pretty bad people. We don’t usually get into bed with people who think that the Jew-killers of the Waffen SS were good chaps,” McShane told RT.