U.S. Government Covertly Paid Thousands of Dollars to Miami Journalists Covering the Detention and Trial of the Cuban Five - The Constantine Report
0 SHARES

Media » U.S. Government Covertly Paid Thousands of Dollars to Miami Journalists Covering the Detention and Trial of the Cuban Five

U.S. Government Covertly Paid Thousands of Dollars to Miami Journalists Covering the Detention and Trial of the Cuban Five

Is it coincidence or conspiracy?

Articles by those journalists and others, a federal appeals court once noted, contributed significantly to inflaming “pervasive community prejudice” in Miami which made it impossible for the agents known as the Cuban Five to receive a fair trial.

Others, however, claim it’s just coincidence that the same journalists who were paid $1,125 to $58,600 to appear on anti-Castro programs produced by the U.S. Office of Cuba Broadcasting before and during the trial for the Cuban Five also published scandalous articles about the Five in an influential Spanish language newspaper owned by the Miami Herald and in other local media.

The National Committee to Free the Cuban Five, during a recent press conference in Washington, released documents listing both the amounts of federal funds paid to the journalists and the articles they published.

“This is a most blatant and outrageous example of government influence destroying the right to a fair trial and the right to appeal,” said Gloria La Riva, Coordinator of the National Committee.

“During the pre-trial period there were hundreds of articles on the Cuban Five and not one was favorable,” La Riva said.

La Riva, in her remarks at the National Press Club in Washington, said the payments to journalists, funneled through Radio and TV Marti, violated federal law banning domestic government propaganda. ... 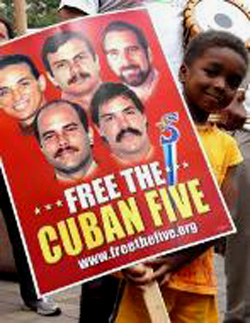 A press conference held June 2 at the National Press Club in Washington, D.C., attended by a variety of national and international media, revealed new evidence uncovered by the National Committee to Free the Cuban Five that the U.S. government has covertly paid tens of thousands of dollars to Miami journalists working for major media outlets who, during the federal government's politically charged Miami prosecution, published often incendiary stories about Cuba and the five Cubans.

The men, known as the "Cuban Five," are serving sentences varying from 15 years to double life, after being convicted of charges including espionage conspiracy.

The press conference revealed names of journalists and payment amounts, and made available notebooks highlighting articles and propaganda by supposedly independent journalists who were covertly on the payroll of the U.S. government.

Gloria La Riva, coordinator of the Cuban Five committee, who opened the press conference, said, "Many of the articles and commentaries by the government-paid journalists were highly prejudicial and biased, with the obvious aim of negatively influencing the Miami public and the jury pool, convicting the Cuban Five, and depriving them of the fundamental right to a fair trial."

Brian Becker, national coordinator of the A.N.S.W.E.R. Coalition (Act Now to Stop War and End Racism), stated that the case of the Five had entered a new stage and announced that a coalition of organizations is initiating a nationwide campaign that will call on U.S. Attorney General Eric Holder to take immediate action to provide remedy and relief to the Cuban Five based on the U.S. government's misconduct and covert operations, which deprived the Five of their fundamental right to a fair trial.

Also speaking at the press conference was Mara Verheyden-Hilliard, an attorney with the Partnership for Civil Justice Fund, which has filed a federal lawsuit on behalf of the National Committee. The litigation filed by the PCJF asserts that the Broadcasting Board of Governors and its Office of Cuba Broadcasting are withholding information that will show that they have engaged in activities in violation of federal law, specifically the Smith-Mundt Act, which prohibits the BBG from seeking to propagandize the U.S. public, and may be continuing to do so.

According to the lawsuit, "The public has an immediate right to know about matters involving improper domestic propaganda as well as whether the U.S. Government compromised the fundamental right to a fair trial of the Cuban Five. These journalists engaged in repeated publications of purportedly independent articles. The articles include many that were highly incendiary, included false information and poisoned domestic public opinion during the prosecution, trial and conviction of the Cuban Five."

'A concerted plan existed to taint the judicial proceedings'

Heidi Boghosian, executive director of National Lawyers Guild, another speaker at the press conference, stated: “The timing of the paid-for journalism suggests that a concerted plan existed to taint the judicial proceedings and tilt the outcome of the trial toward guilty verdicts, depriving the defendants of the cherished Sixth Amendment right to a fair trail by an impartial jury. There can be no doubt that misleading and disparaging articles written by reporters paid by the government had a direct impact on public opinion, the trial court, and the full 11th Circuit Court of Appeals in the case of the Five.”

In January 2009, the National Committee issued a Freedom of Information Act request to the Broadcasting Board of Governors seeking information on U.S. government payments to supposedly independent journalists. Key information initially released by the BBG to the committee made clear that the amount of covert government payments to journalists was substantial—however, the agency is refusing to hand over critical underlying documents to the National Committee and is fighting to keep this information from becoming subject to public scrutiny.

(For more information on the campaign to free the Cuban Five, audio and video from the press conference, links to media coverage and additional details about these new revelations, go to freethefive.org.)