The ACLU's Privacy SOS presented a great article about why "it's time to pull the plug on fusion centers!" While it's well-known that Microsoft has a great and long-standing relationship with government, law enforcement, and intelligence agencies, Privacy SOS pointed out the interesting tidbit that Microsoft helps pay for fusions centers. Fusion Centers, in turn, give out grants to police departments for new surveillance technologies.

A bipartisan Senate investigation and report previously found that fusion centers are basically 'useless' in countering terrorism, but 'troubling' when it came to violating the privacy and civil liberties of U.S. citizens. DHS did not want to share a 2010 assessment of fusion centers with the Senate Subcommittee, reported Privacy SOS, but "did so after the DHS obtained the 'consent' of a 'private, non-governmental organization, the National Fusion Center Association (NFCA), which supposedly had the authority to represent the 68 centers subject to review'."

Led by a former DHS grants official who lobbies for increased federal funding for fusion centers, the NFCA receives funds from Microsoft, ESRI, Thomson-Reuters, Mutualink and other firms that want business with fusion centers.

When the Domain Awareness System launched in August, you may recall that Microsoft helped the NYPD launch the crime and terrorism prevention system that was compared to being like Minority Report and an all-seeing Big Brother. In fact, at that time, it was revealed that Microsoft has been quietly becoming one of the world's largest intelligence solution providers. In light of the Privacy SOS revelations about Microsoft providing funds to fusion centers, which don't provide actionable intelligence to combat terrorism, but do violate civil liberties, Microsoft's favorite quote to me, "your privacy is very important to us," seems especially hard to swallow. That is unless you buy into the theory that America is overrun with potential terrorists or believe all the ridiculous you-might-be-a-terrorist-if lists of innocent behaviors actually being so dangerous? It's very aggravating that pro-surveillance people claim that anyone complaining about it is basically against stopping terrorists or other criminals. That's a bunch of BS.

This is 2007 example "work-up" from "Fusion Framework gives law enforcement the most potent weapon-timely information." 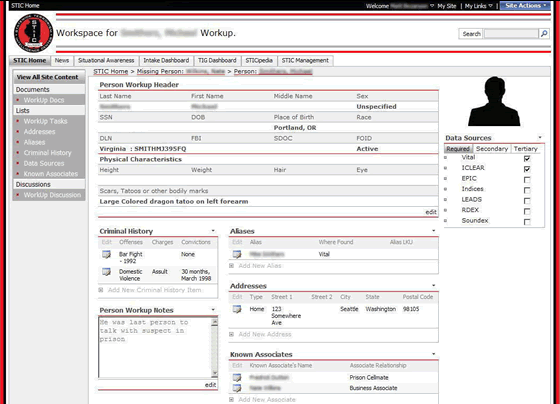 Microsoft further states that "secure and trusted information-gathering, assessment, and sharing are critical across all levels of government and the private sector, and information fusion centers have become the generally accepted solution." As a matter of fact, Microsoft's Fusion Core Solution software includes Office and several references to security and privacy. Perhaps fusion centers didn't get a memo, since Privacy SOS wrote, "Remarkably, given the nature of their role in dealing with supposed 'national security secrets,' DHS personnel would write their reports as Microsoft documents and (before October 2011) send them to headquarters via unclassified emails."

Although fusion center Intelligence and report officers earn about $80,000- $100,000 per year, it is unclear if Microsoft does not teach the importance of security and privacy, or if the fault lies in the "five-day training session" that spends three hours teaching "how to write a Human Intelligence Report and two hours on civil liberties issues."

Ironically the bottom of this Microsoft Fusion Core Solution page includes a disclaimer: "The inclusion of a company does not imply endorsement by Microsoft of the company or its products or services." If Microsoft provides funding and fusion framework, that certainly does imply endorsement.

If you recall, police departments tap fusion centers for money to purchase data mining software, Automated License Plate Recognition systems (LPR system), sophisticated cell phone tracking devices, a surveillance monitoring wiretap room, as well as covert, wireless audio/video recorders to name but a few of the spy technologies purchased by cops with grants from fusion centers. The ACLU has warned that APLRs can record our every move and that the DEA is utilizing and calling for more of this technology to track us . . . even though a former DEA officer said, "The war on drugs has failed." Are these the types of spying devices that Microsoft helps pay for?

It's no surprise that Microsoft did not create this video for easy social network sharing or for embedding, but here is Microsoft's Fusion Core Solution Demonstration video; please watch it.

Below are two videos dealing with SharePoint, and Microsoft and ESRI's Fusion Core Solution available via YouTube.

Microwave terror is real, measurable,
it is targeting innocent people
and not being addressed accurate.