University of Maryland history professor, Jeffrey Herf, speaks to students and faculty about Nazi Propaganda at the Carr Collins law building on Friday.

” … Herf attributed a great deal of the Nazi’s anti-Semitic propaganda’s success to the radicalization and politicization of certain elements of Christianity.’ …  The lecture also shed light on a lesser known form of communication between the Nazi party and the people of Palestine: radio transmissions. Radio was often utilized through the Arab world as a means to promote and encourage the mass murder of Jews. … “ 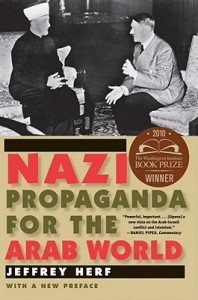 Jeffrey Herf, a history professor from the University of Maryland, spoke on Friday about Nazi propaganda as it related to the Arabs and Muslims in the World War II era in a lecture sponsored by the Tower Center of Dallas.

Herf prefaced his lecture by saying, “When you look at the text, you find that it’s much more than what everybody already knows.'” He then began his lecture by outlining the causes of World War II in regards to the Nazis, stating that the Germans very clearly outlined their plans for the mass extermination of the Jews. This plan would later come to be known as the “Final Solution,” and the details of it would be discussed between Hitler and then-leader of Palestine, Mohammad Amin al-Husayni. The two leaders would eventually collaborate in their mutual effort to expel, and later eliminate, the Jews. Herf attributed a great deal of the Nazi’s anti-Semitic propaganda’s success to the radicalization and politicization of certain elements of Christianity, carefully adding that “historians take the best available evidence and make the best possible guesses and interpretations of what happened based on that evidence.” Herf also noted that the racist message of Adolf Hitler’s famed Mein Kampf was not limited to the Jews, though the more racially-inclusive aspects of the book were intentionally overlooked as the Nazis continually emphasized anti-Semitism in their messages to the Arabs. Herf’s lecture also focused on the political and intellectual causes of the “Final Solution.” He was eager to supplement his lecture with an analysis of the relationships between Jews, Christians, Muslims, Nazis, Americans, Arabs and various other demographic people groups. However, he did this carefully and not without warning: “When referring to specific people groups,” he said, “It is very important to avoid generalizing. Avoid calling people ‘the Muslims,’ ‘the Jews’ and ‘the Christians.'” The lecture also shed light on a lesser known form of communication between the Nazi party and the people of Palestine: radio transmissions. Radio was often utilized through the Arab world as a means to promote and encourage the mass murder of Jews. Herf’s decision to emphasize this “obscure” method stemmed from his answer to the question: “Who thinks about Arabic radio broadcasts when they think of Nazi propaganda?” “The overwhelming response is: no one,” Herf said. According to Herf, this ignorance is due to the fact that “most Arabic radio broadcasts were never recorded, and the ones that were ended up destroyed, lost, stolen or hidden.” The professor offered quotes from some of the surviving broadcasts to illustrate the incendiary nature of the propaganda. When asked why he thought Nazi propaganda was so effective in promoting the “Final Solution,” Herf responded, “Amnesia … people’s failure to remember the lessons of the past.” In his closing comments, Herf stated that he hopes for a younger generation that will not dismiss the past and will proactively work to become part of the future solution, rather than the problem. http://www.smudailycampus.com/news/u-of-maryland-history-professor-jeffrey-herf-speaks-on-affects-of-nazi-propaganda-1.2069589

The Islamophobia Industry
OpEd: Why Opposition to David Horowitzs’ Hate Speech is Not About the First Amendment
Resist “Islamo-Fascism Awareness Week”: Confront the Horowitz Fascists