Twenty-Six years ago Philadelphia police bombed the headquarters of a radical group called MOVE. The ensuing explosions and fire killed 11 people, including 5 children, destroyed 61 homes and leveled the block on Osage Avenue.

Twenty-six years ago Philadelphia police bombed the headquarters of a radical group called MOVE. The ensuing explosions and fire killed 11 people, including 5 children, destroyed 61 homes and leveled the block on Osage Avenue. 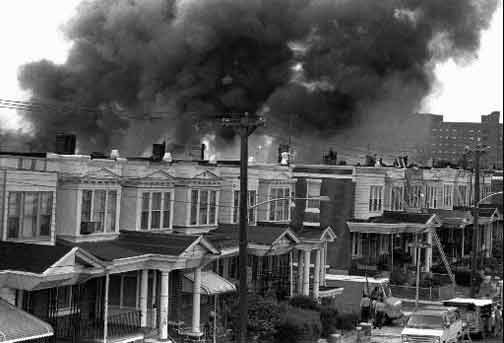 Since then the residents of Osage Ave. have had nothing but anguish trying to re-build their lives despite botched rebuilding attempts, feckless efforts from 4 successive mayors and long running lawsuits.

But 24 residents sued for breach of contract for stopping the repairs, which had been promised by Street’s predecessor. A federal jury awarded each homeowner $534,000, but a judge slashed it to $250,000. An appeal brought the settlement to $190,000 per house in 2008.

MOVE was a Philadelphia based movement dedicated to black liberation that believed in a “back to nature” approach to life. Founded by John Africa, all members of MOVE took the surname Africa, prompting some to call it a radical cult.

The 1985 Philadelphia police bombing of the MOVE headquarters on Osage Street dates back to 1978. At that time MOVE was housed in the Powelton Village area. Police executing a court order were in a year long standoff with MOVE trying to evict the group. When police raided MOVE one police officer was killed and 7 police injured. Nine MOVE members were found guilty of murder.

Blood is spilled, Cops get killed, MOVE moves into Osage Street in West Philadelphia and it starts to stock pile weapons. MOVE broadcast strident political messages over loudspeakers day and night, prompting complaints from neighbors and motivating the police to move in.

Tear Gas and Water Cannons from police and fire fighters was greeted with gunfire from the MOVE house. The police responded in kind and then bomb was dropped on the tar covered roof.

The resulting explosion caused the house to catch fire, igniting a massive blaze which eventually consumed almost an entire city block.[10] Eleven people, including John Africa, five other adults and five children, died in the resulting fire.[11] The resulting fire was unable to be put out due to the fact that firefighters were being shot at. Ramona Africa and one child, Birdie Africa, were the only survivors.

An investigation ordered by then mayor William Goode concluded that the police used excessive force and violated MOVE’s constitutional rights.

Now, 25 years later, with nine of the MOVE members in jail, many of the police retired, 4 mayors later, the people who continue to call Osage Avenue home, like Gerri Bostic it is story with no happy ending.

The homes built to replace those lost in the bomb-ignited inferno were so shoddy that officials stopped making repairs and offered buyouts.

“There’s nothing nice about this block anymore,” said Bostic, 89. “All the people are gone.”

And now that a long-running lawsuit over the replacement houses has ended, Councilwoman Jannie Blackwell says the city needs to put the past to rest on Osage Avenue and Pine Street.

“It’s time to make peace with it all and fix up the properties,” Blackwell said.

New Documentary Revisits the MOVE Bombing with an Unconventional Approach