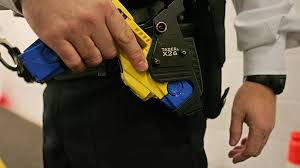 LOS ANGELES (CN) – Clueless Hawthorne police beat and tasered a deaf man as he signaled to them that he was deaf and his friend had loaned him the snowboard he was carrying, the man claims in court.

In a federal complaint for violation of the Americans with Disabilities Act, Jonathan Meister claims the attack could have been avoided had Hawthorne trained its police officers to communicate with the deaf and hard of hearing.

Officers confronted him on Feb. 13 outside a friend’s home as he picked up a snowboard and winter clothes for a trip to Utah, Meister says in the lawsuit. Meister says he used hand gestures to try to tell police he is deaf and was lawfully at the home. The cops were having none of it. They “shot Taser darts into Mr. Meister, administered a number of painful electric shocks, struck him with fists and feet, and forcibly took him to the ground,” he says in the complaint.

Officers kicked and punched him in the back and stomach, choked and Tasered him, delivering “punishing shocks” and intentionally “burning his flesh,” Meister claims.

After he was knocked unconscious and taken to a hospital, he was cited for assaulting the officers and released, but the charges were dropped.

“This incident occurred in substantial part because the HPD [Hawthorne Police Department] does not provide its officers the training and resources to serve people who are deaf or hard of hearing, including those who communicate primarily through American Sign Language,” the lawsuit states.

Meister seeks statutory, treble and punitive damage for violations of the Americans with Disabilities Act and the Rehabilitation Act, and civil rights violations. Also named as defendants are the City of Hawthorne, its Police Department and Police Chief Robert Fager. Meister is represented by John Burton of Pasadena.

Hawthorne is part of Greater Los Angeles, between Manhattan Beach and Compton.

Numerous, similar lawsuits have been filed across the country, in which police beat and arrested diabetics suffering from insulin shock, believing, or claiming to believe, that they were drunk.