The US Assassination Program in Colombia - The Constantine Report
0 SHARES

American Terrorism » The US Assassination Program in Colombia

"... the U.S. is aligning with known terrorists and drug dealers in Colombia in the name of fighting terrorism and drugs. ..."

Why Are We Only Learning of This Now?

The U.S. Assassination Program in Colombia

On December 21, 2013, The Washington Post published a story entitled, “Covert action Colombia,” about the intimate and critical role of the CIA and the NSA in helping to assassinate “at least two dozen” leaders of the Colombian FARC guerillas from “the early 2000s” to and through the present time. The author of the story, Dana Priest, claims that the story is based on “interviews with more than 30 former and current U.S. and Colombian officials.”

While The Washington Post story reads like an advertisement for the CIA and NSA, there are some truths buried in the piece which are worthy of consideration. The most illuminating statement is that while the CIA and NSA, allegedly in the interest of fighting drug trafficking and terrorism, have assisted the Colombian government in hunting down and murdering Marxist FARC guerillas with U.S.-made smart bombs, “for the most part, they left the violent paramilitary groups alone.”

This is an important point, for as the piece itself acknowledges, the paramilitaries are indeed “violent,” and, with the help of the U.S.-backed Colombian military, have been engaged in a decades-long campaign of terror against the civilian population. And consequently, the U.S. officially designated the predecessor of the current paramilitaries – that is, the AUC — as a terrorist organization.  Meanwhile, it is well-accepted that both the Colombian paramilitaries and their military allies are major drug traffickers in their own right.

In short, the U.S. is aligning with known terrorists and drug dealers in Colombia in the name of fighting terrorism and drugs. While this may seem preposterous, there is indeed a logic to it.

First of all, the U.S. is all for terrorism in Colombia. Indeed, paramilitary terror in Colombia, and in Latin America in general, is the brain child of the U.S. and a part and parcel of the “National Security” doctrine initiated by President Kennedy in 1962. As Noam Chomsky has explained on numerous occasions, this doctrine, and the death squads that went with it, was initiated in response to both the Cuban Revolution of 1959 as well as the doctrine of Liberation Theology and its “preferential treatment for the poor” which arose in response to Vatican II.  [1]

The result of the implementation of the “National Security” doctrine was massive repression of popular, democratic forces, and the murder, disappearance, imprisonment and torture of those struggling for social justice, such as trade unionists, peasant organizers and priests advocating for the poor. As to the latter group, at least 80 Catholic priests have been murdered in Colombia since 1984.

As Chomsky again notes, “[i]t is not seriously in question, as John Coatsworth writes in the recently published Cambridge University History of the Cold War, that from 1960 to ‘the Soviet collapse in 1990, the numbers of political prisoners, torture victims, and executions of nonviolent political dissenters in Latin America vastly exceeded those in the Soviet Union and its East European satellites.’ Among the executed were many religious martyrs, and there were mass slaughters as well, consistently supported or initiated by Washington.”

Thus, there is a seamlessness to the decades-long policy of the U.S. in siding with right-wing death squads which inflict terror against the Colombian population – terror which includes the mass displacement of millions of peasants, with Colombia now having the largest internally displaced population in the world at over 5 million; forced disappearances, with Colombia now far exceeding the former Latin American leader, Argentina under the military junta, with over 50,000 disappeared persons; and the “false positive” scandal in which over 3,000 innocent young men were lured to their deaths by the Colombian military which killed them and then falsely passed them off as guerillas in order to justify continued backing by the United States.

Similarly, the U.S. is not against drug trafficking per se, but rather, is only concerned with making sure that its friends – both military and corporate — benefit from the trade. First of all, as noted above, it is well-established that the U.S.-backed Colombian military and its paramilitary allies are some of the chief drug traffickers in Colombia. And again, the U.S. has left their trafficking alone because it is content for these forces to profit from the trade. 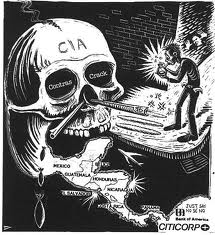 As The Guardian recently explained, the entire Western banking system is propped up by billions of dollars of Colombian drug monies. [1]  Therefore, it is not in the U.S. interests to too effectively combat drugs. And, sure enough, it has utterly failed to do so despite the over $9 billion it has spent on the ostensible “war on drugs” in Colombia and the greater Andean region. Rather, in what is well-known as the “balloon effect,” all that the U.S. has managed to do is force the drug trade out of parts of Colombia and south to places like Peru, and north to Mexico where over 60,000 innocents have now been killed in the ostensible “war on drugs.”

Of course, The Washington Post story on the CIA/NSA program to assassinate FARC leaders, and its accompanying charts which purport to show a decrease in overall drug trafficking, at least from Colombia, fails to point any of this out. As noted above, The Washington Post story reads like an advertisement for the CIA and NSA and their secret “black ops” programs which are funded by Congress, but which the U.S. public knows little to nothing about. And, the U.S. government would largely like to keep it that way. In this case, I suspect that the CIA and NSA cooperated with The Washington Post story in order to justify future “black ops” funding as well as to impact the ongoing peace talks which are now taking place in Havana, Cuba between the Colombian government and the FARC.

On this latter issue, it is my belief that at least sectors of the U.S. government want to scuttle the ongoing peace talks between the Colombian government and the FARC – as the U.S. has done so often before.[3]  In this case, The Washington Post story seems designed to bolster the sectors in Colombia that already oppose the peace process – namely, former President Alvaro Uribe, his political allies and the right-wing paramilitaries which the U.S. has intentionally left alone – by painting the false impression that the civil war in Colombia is militarily winnable.

As we enter the 50th year of the conflict, it is now evident to any rational person that this not a winnable war for either side, and that a negotiated settlement is the only hope for peace in Colombia and for the civilians caught in the middle of the war. It is critical that those in the U.S. interested in peace join at this pivotal moment with those brave souls in Colombia who are risking their very lives – indeed, 29 members of the pro-peace Marcha Patriotica have been murdered in the past year and a half — to promote a political solution to the half century old conflict in that country.[4]

[5]  To hear some of the brave Colombian voices of peace and their suggestions for how the U.S. can constructively support the peace process, go tohttp://www.wola.org/video/livestream_perspectives_on_colombia_s_peace_process_and_opportunities_for_us_engagement