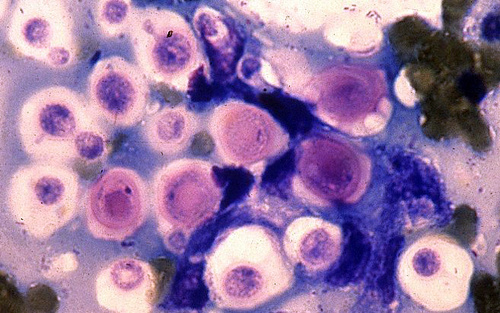 Cryptococcus gattii is an airborne fungus usually found in the tropics. But researchers announced today that new, deadly strains are thriving in Oregon, and spreading. These strains kill 25% of people who come into contact with them.

A paper published this afternoon in PLoS Pathogens offers details on the new strain of C. gattii, and how it came to the Pacific Northwest. After several local animals died from exposure to the airborne fungus, researchers realized that this wasn't an imported problem - the animals had lived their whole lives in Oregon, so they couldn't have been exposed in the tropics. There must be a local version of the toxic fungus. They gathered a sample and examined its genome, only to discover that this was a new strain of an already-virulent lifeform. They dubbed these strains VGII.

This novel fungus is worrisome because it appears to be a threat to otherwise healthy people. Typically, we more often see this fungal disease associated with transplant recipients and HIV-infected patients, but that is not what we are seeing yet.

How did a tropical toxin wind up in Oregon? The researchers believe climate change may have something to do with it. Plus, these new strains are probably better adapted to the region. They likely evolved from an outbreak of C. gattii in British Columbia in 1999. The fungus then spread to Washington and Oregon.

The mortality rate for recent C. gattii cases in the Pacific Northwest is running at approximately 25 percent, or 5 out of 21 cases analyzed in the United States, compared to a mortality rate of 8.7 percent of 218 cases in British Columbia, Canada . . . Symptoms can appear two to several months after exposure, and while most people never develop symptoms, those infected may have a cough lasting weeks, sharp chest pain, shortness of breath, headache (related to meningitis), fever, nighttime sweats and weight loss. In animals the symptoms are a runny nose, breathing problems, nervous system problems and raised bumps under the skin. While C. gattii can be treated, it cannot be prevented; there is no vaccine.

One of the lingering questions the researchers were left with was whether the fungus is becoming more virulent as it spreads. The answer hinges in part on how the fungi reproduce (since fungi can do it in a number of ways). It looks as if the new strains of C. gattii are getting it on with opposite sex and same sex partners. These matings appear to result in spores that are even more deadly to living creatures.

If C. gattii keeps having sex and spreading, its next victims will mostly likely be in Northern California, where the weather is very similar to Oregon. It's unlikely to expand eastward, due to the freezing winters.

[click to enlarge this diagram of virulence in the different strains]

Send an email to Annalee Newitz, the author of this post, at annalee@io9.com.