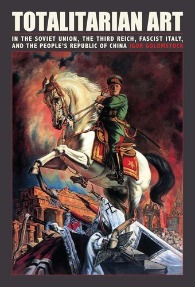 Soviet kids say the darnedest things, art historian Igor Golomstock discovered when he led field trips through Moscow’s Pushkin Museum of Fine Arts in the late 1950s. The schoolchildren indicated that they couldn’t distinguish between the propaganda paintings of Nazi Germany on display and the works of Socialist Realism that had flourished (if that is the right word) under Stalin’s decree.

In a freer society, such occasions might have inspired a lesson about the forms and functions of government propaganda or a lively debate about the merits of enacting the separation of art and state. Until Golomstock emigrated or his country liberalized, however, public discussions of topics like these would need to wait.

But a question continued to nag Golomstock: Why the remarkably similar aesthetic expressed in the propaganda images of the Nazis and in those of the Soviets, despite the regimes’ ideological hostility toward each other?

Finally, in 1990, he published his answer in Totalitarian Art: In the Soviet Union, the Third Reich, Fascist Italy, and the People’s Republic of China. The book has just been re-issued and updated to include material on propaganda in Kim Jong Il’s North Korea and in Saddam Hussein’s Iraq. 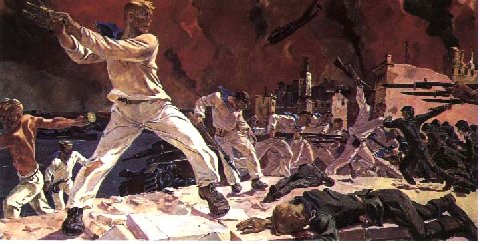 Writing in the May/June issue of Foreign Affairs, Kanan Makiya, professor of Islamic and Middle Eastern Studies at Brandeis University, has kind words for the new edition:

By cataloging and reproducing hundreds of images, some never before published, of paintings, posters, and sculptures and juxtaposing Soviet, German, Italian, and Chinese works to one another, Golomstock has fleshed out that original intuition [viz., his inkling that Nazi and Soviet propaganda share more than superficial similarities]. His exploration of these works, and his unearthing of the multitude of stories surrounding their origin, production, and fate, is invaluable. Totalitarian Art is an indispensable work of reference on the art produced under four regimes that, between them, are responsible for the deaths of tens of millions of people.

Saddam insisted that his forearms be cast for molds for Baghdad’s Victory Arch, 1989.

Makiya’s review essay (“What Is Totalitarian Art?”) goes beyond a mere evaluation of Golomstock’s book. An authority on art under Saddam Hussein, Makiya also offers his own insights about government propaganda, and well as reasoned disagreements with some of Golomstock’s analysis. Highly recommended.