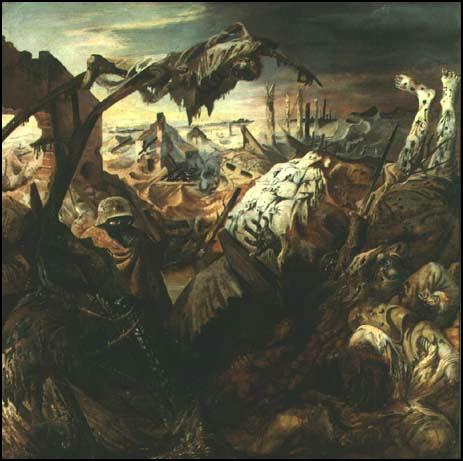 A "Degenerate" painting by Otto Dix

BERLIN— In 1937, Nazi officials mounted an exhibition in Munich called "Degenerate Art," or entartete Kunst in German, to display over 650 artworks that the Third Reich had banned for alleged moral impurity, either because it was by a Jewish artist or because it exhibited some other unforgivable trait, such as Cubist perspective. Featuring many famous paintings and sculptures by some of the leading artists of the time — Marc Chagall, Emil Nolde, Otto Dix, and Ernst Ludwig Kirchner among them — the show was intended to draw scornful jeers from its audience, mocking the expressionist freedom the art conveyed. Now, more than 70 years later, those works and 20,000 more have been gathered together again in an online database that Berlin's Free University created to record the art that the Nazi regime outlawed.

The database, which is available here, is the work of the university's "Degenerate Art" Research Center, which was founded in 2002 to study arts policy under the Third Reich, with an emphasis on the thousands of artworks the regime seized and the nearly 1,400 artists affected. Led by professor Klaus Krüger, the center's team of researchers have compiled data on the artworks, links to images, and, most interestingly, details about where they currently reside — an intensely fraught piece of information, considering the ongoing restitution cases that have raged in courts ever since the fall of the Third Reich.

The 1998 Washington Conference on Holocaust-era Assets laid out clarifying procedures for reclaiming works looted by the Nazis, but oftentimes these efforts are met with dead ends. And the fate of "degenerate" artworks are only a part of the much larger issue of Nazi restitution, which also covers many works looted or otherwise illegally obtained under the regime. Currently, a California court is deliberating a claim by the San Diego-based heir of an art collector who is seeking the return of Pissaro's Rue Saint Honoré—Afternoon, Rain Effect (1897), which resides in Spain's Thyssen-Bornemysza Museum and which the heir claims his grandmother sold under duress while fleeing Germany in 1939. The museum is arguing that the lawsuit has no basis because it originates in a U.S. court.

The Plot Against The Peace, by Michael Sayers and Albert E. Kahn – Excerpts