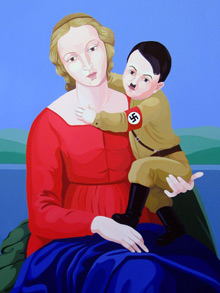 Giuseppe Veneziano’s show entitled ‘The Zeitgeist’ opened this month in Pietrasanta, Tuscany, Italy, featuring among others a work featuring Hitler as a child cuddling up to the Virgin Mary.

The picture titled ‘The Virgin of the Third Reich’ is just one of many paintings featuring famous figures including Jesus Christ and Pope Benedict XVI.

Veneziano’s art has stoked controversy in the Catholic and Jewish world with many calling them offensive.

He said: “That painting offends us as faithful and as people who lived during the terrible period of Nazism. We don’t hide behind art.”

Lord Mayor Domenico Lombardi said: “I take full responsibility for this problem. I’d never seen it before I approved it otherwise I would have chose another painter for this exhibition slot.

But the artist defended his work, he said: “If art cannot provoke, what can it do?”