Media Matters | September 20, 2010 — The Toronto Sun issued a correction to a column they recently published claiming that George Soros, as a child, "collaborated with the Nazis." This smear has long been popular among conservatives attacking Soros for his support of progressive causes. 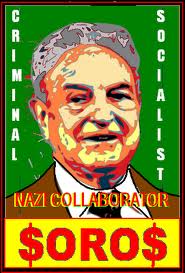 "When the Nazis took total control of Hungary in 1944, the Holocaust followed. In two months, 440,000 Hungarian Jews were deported to death camps.

"To survive, George, then a teenager, collaborated with the Nazis.

"First he worked for the Judenrat. That was the Jewish council set up by the Nazis to do their dirty work for them. Instead of the Nazis rounding up Jews every day for the trains, they delegated that murderous task to Jews who were willing to do it to survive another day at the expense of their neighbours.

"Theodore hatched a better plan for his son. He bribed a non-Jewish official at the agriculture ministry to let George live with him. George helped the official confiscate property from Jews.

"By collaborating with the Nazis, George survived the Holocaust. He turned on other Jews to spare himself."

Levant distorted the conduct of Soros, who was 14 years old at the time. As Media Matters has noted, Soros, who discussed his childhood in Nazi-occupied Hungary in a 1998 interview on CBS' 60 Minutes, was only a young teen during the Holocaust and was under the care of a Hungarian Agriculture Ministry employee, posing as his godson. On 60 Minutes, Soros said that he accompanied his "godfather" as he went to oversee the confiscation of property from Hungarian Jews.

As biographer Michael Kaufman wrote in Soros: The Life and Times of a Messianic Billionaire (page 37):

This is what actually happened. Shortly after George went to live with Baumbach, the man was assigned to take inventory on the vast estate of Mor Kornfeld, an extremely wealthy aristocrat of Jewish origin. The Kornfeld family had the wealth, wisdom, and connections to be able to leave some of its belongings behind in exchange for permission to make their way to Lisbon. Baumbach was ordered to go to the Kornfeld estate and inventory the artworks, furnishings, and other property. Rather than leave his "godson" behind in Budapest for three days, he took the boy with him. As Baumbach itemized the material, George walked around the grounds and spent time with Kornfeld's staff. It was his first visit to such a mansion, and the first time he rode a horse. He collaborated with no one and he paid attention to what he understood to be his primary responsibility: making sure that no one doubted that he was Sandor Kiss.

On September 5, 2010, a column by Ezra Levant contained false statements about George Soros and his conduct as a young teenager in Nazi-occupied Hungary.

Upon receiving a letter of complaint from Mr. Soros's legal counsel on September 13, 2010, Sun Media Corporation always intended to publish a retraction and apology for this column. Despite constant efforts on both sides, Sun Media and Mr. Soros's counsel were unable to reach agreement on the content of a retraction.

The management of Sun Media wishes to state that there is no basis for the statements in the column and they should not have been made.

Sun Media, this newspaper and Ezra Levant retract the statements made in the column and unreservedly apologize to Mr. Soros for the distress and harm this column may have caused to him.

Soros-Nazi smear a favorite of right-wingers

COULTER: Not with the Democrats. Oh, no. They have a Nazi collaborator, literally, international financier George Soros funding their phony grassroots organizations. So they look at Rush and say, "Who is funding you?" Well, Rush Limbaugh is funding Rush Limbaugh.

COULTER: I don't think George Soros' name should come out without pointing out that this is not the first crisis he's done well in. He collaborated with the Nazis in Hungary, as he admitted, so he did well under the Nazis.

Soros is a behind-the-scenes despot. He is an evil man who has used his wealth to further all the causes the Democrat Party holds dear.

He was also a Nazi collaborator. In his autobiography, entitled "Soros on Soros," he blithely describes how as a teenager he helped cart off the possessions of Hungarian Jews after they were sent to concentration camps. Soros wrote that this never bothered him, even though his father was Jewish and he grew up in a Jewish home. He says he has no regrets for his actions. "Somebody would have done it," he wrote.

If, as White House Chief of Staff Rahm Emanuel says, Rush Limbaugh "is the voice and the intellectual force and energy behind the Republican Party," it is only fair to ask: Who is his Democratic counterpart?

Our nominee is George Soros, the Hungarian billionaire and former Nazi sympathizer who helped fund MoveOn.org, the radical group that smeared Gen. David Petraeus with its "General Betray Us" ad last fall.

Through his Open Society Initiative and personal contributions Soros has funded many liberal causes and many Democratic candidates with the intent of undermining democracy and capitalism. His ultimate goal is to create a global socialist collective where we hand over our money and/or freedom and sing "Kumbaya."

For our part, we'll take Rush over Soros.

KSFO radio hosts: Soros "very cheerfully and willingly, went to work for the Nazis." From the February 8, 2007, broadcast of KSFO's Morning Show:

LEE RODGERS: Now, here is the inconsistency problem that Mr. Soros, like so many Democrats, displays. Given his personal history, a cynical person might think George Soros would be delighted to see the Nazis in charge, because in 1944, when the Germans invaded his native country, Hungary, and took over, Mr. Soros hid the fact that he's a Jew -- you can't really blame him for that --

RODGERS: -- it's about survival; a lot of people did it. But then, he, apparently very cheerfully and willingly, went to work for the Nazis, as other Jews were being killed or shipped off to the death camps, he ran around Hungary with Nazi officials, serving eviction notices to people who were going to be shipped out on the death trains --

RODGERS: -- so his Nazi buddies could come in and confiscate their property. Now, if you doubt this -- any of you whiny liberals -- "Well, I heard that on a conservative program. They had to have made it up" -- just do a little Internet search of your own, go to Yahoo or Google or whatever you want, and write in "George Soros," plus the word "Nazis," plus "1944." Take a look. See what comes up. See for yourself.

KSFO apologized for "not accurate" attacks on Soros. On February 26, 2007, KSFO's program director issued a correction to the Morning Show hosts' smears of Soros, saying that their comments were "not accurate" and that the station "regrets that they were broadcast."

George Soros says he worked with Adolph Eichmann, (a zionist jew who released others, according to their statements) confiscating property, and has no regrets; someone else would have done it if he didn’t. Widely disseminated quotes.

Sara has been conned by right-wing perception managers. Soros was 14 years old. We hear a great deal about this juvenile Nazi collaborator because he’s a symbol of the left. But Prescott Bush, a full-grown politician> Not a word. Where is the Republican anger at ITT, Standard Oil, Monsanto, American Cyanimide (Home Products currently), GE, Ford, IBM, General Motors, and some 2,000 other major US corporations for arming the Nazi war machine? Not a mention of this in Republican propaganda. But little 14 year-old Soros? He is singled out ad nauseum because he funds the left. Fascists like Sara revel in pointing fingers and should turn it on themselves.

The Latest Hoax Book on the John Kennedy Murder

“Obama Is a Secret Muslim Plotting With an Evil Billionaire”

Who is M. Stanton Evans?

The PIONEER FUND as PROMULGATORS of FASCISM