“In the case of the revolutionary Attica uprising, the Prisoner’s Movement was violently suppressed on personal orders from Nelson Rockefeller, with scores of prisoners brutally beaten, tortured and murdered as examples to others in and out of the penal system. … ” – Mae Brussell 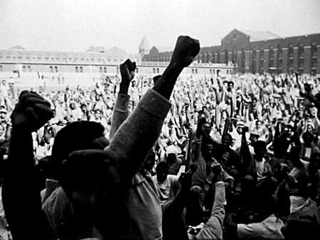 As this paper’s late great photographer, Fred McDarrah, used to say when cornered by readers angry over something they disliked in its pages, “The Voice is many voices.” This is why Clark Whelton’s article blaming leftists for the bloodiest prison siege in American history — “Attica: The Death of ’60s Radicalism” — ran in its September 16, 1971 issue three days after troopers stormed the prison, and presumably why it was reprinted Friday on the Voice‘s Web page.

But as a New Yorker who still gets a twinge of rage when the name “Attica” surfaces, it’s worth mentioning that there were other voices in that week’s paper, and many others in the months and years following, trying to understand the riot, and the spasm of death that followed Governor Nelson Rockefeller’s order to retake the prison.

One of those voices, on the front page of the same September 16 issue, was that of David Rothenberg, theater producer and founder of the prisoners’ aid group, the Fortune Society, who was present inside Attica as one of those liberal negotiators condemned in Whelton’s piece. Thanks to the miracle of Google, you can read Rothenberg’s account — which was written before 39 prisoners and guards were killed in the withering blast of gas and bullets as Rockefeller’s army opened fire on the morning of September 13.

Here are a few tastes:

“The scene which rose before me provoked ambivalent and deep feelings. Twelve hundred men had set up a desperation camp. Through the darkness you could see an army of orderly inmates, sitting and standing in small groups. Fear hung heavily in the air. The unknown was in control…The men in the yard had not eaten, slept, or had water for 48 hours. The yard was at tension peak, and fear was in every man’s throat and heart.”

The outside negotiators were asked by inmates to tell the crowd why they were there. In addition to Whelton’s main target, radical lawyer William Kunstler, these included an assemblyman from nearby Buffalo, a congressman from the Bronx, Timesman Tom Wicker (who later wrote a fine book about it, “A Time to Die“), and the publisher of the Amsterdam News. Rothenberg explains:

“Others spoke before me — giving estimations of their own reasons for responding to the inmates. They varied from the very personal to the very polemic but seemed to resolve little other than that we were in the midst of people who could arouse an angry crowd. In two sentences, I stated that I was there because I was asked and because I cared.”

One of the reasons he cared, Rothenberg explains, is because of the account he’d been given by a recently released Attica inmate who said “the Attica riot was inevitable because of the total lack of communication between the administrators and the inmates.”

“He told me that the guards carry long, wooden sticks they refer to as ‘nigger sticks.’ He told me that most communication between the guard and the inmate is with stick. ‘If he wants you to move, he’ll tap his stick on the wall. A second tapping of the stick would mean to stop.’ The inmate population at Attica is 80 percent black and Puerto Rican–with not one black guard or administrator … Inmates are permitted one shower per week.”