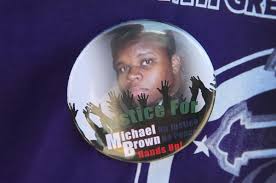 Conflicting reports: “… Jackson said Wilson encountered Brown after responding to a 911 call involving the robbery of a convenience store. Police officials did not provide further information, and why Brown was ultimately killed remains an open question. According to witnesses, Brown was shot while his hands were in the air. However, police reports state that police struggled with Brown in a squad car and that Brown allegedly reached for an officer’s gun before being shot. …” Al Jazeera

“… Emotions ramped up again Friday when authorities finally gave in to days of pressure and released the name of the officer who shot Brown, but did so only after first saying that Brown was a suspect in the theft of cigars from a convenience store at the time he was shot, a move that supporters of Brown’s family called a “smear” campaign. …” — The Star Online
By Chris Caesar
Boston.com, August 15, 2014

Spokesmen for the family of an unarmed Missouri teen fatally shot by police last week said the release of surveillance stills by Ferguson Police was an act of “character assassination” against the 18-year-old. Michael Brown was reportedly a suspect in a robbery involving a stolen box of cigarillos from a Ferguson convenience store, captured in surveillance stills released by the department. But Police Chief Thomas Jackson later told reporters that the officer who confronted and shot Brown was at least initially unaware he was a suspect in the robbery.

Instead, the teen was stopped because he “walking down the street blocking traffic.”

The revelation prompted one reporter to ask: then why did you release it all?

“Because you asked for it,” Jackson said, gesturing to reporters. “I held it for as long as I could.”

Jackson later told the St. Louis Post-Dispatch that the officer, Darren Wilson, saw the cigars in Brown’s hand and thought he may be the suspect.

“This is basically smoke and mirrors to divert from attention from what really occurred,” Brown’s cousin Eric Davis told reporters today. Whatever took place there had nothing to do with the individual getting down on his hands and knees, raising his hands in the air and saying ‘don’t shoot,’” Davis continued, mimicking the behavior for reporters. “I can hear my cousin’s voice now, as I say it.”

“Whatever happened in that store had nothing to do with that officer’s mindset and his decision to kill Mike,” family attorney Anthony Gray said. “Any portrayal of (Brown like that) is a sideshow. We all have to focus on the conduct of the officer at that time.” Gray also encouraged the family’s supporters to continue their peaceful protests in Ferguson and around the country.