'Food, Inc.' and the Tyranny of a Corporate Controlled Economy (Film Review)

‘Food, Inc.’ and the Tyranny of a Corporate Controlled Economy
The corporate threat to both our health and our liberties…

by Ernest A. Canning | Brad’s Blog 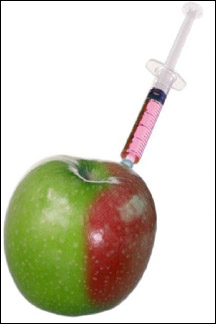 We hear it constantly from Republicans; an ideological mantra to the effect that government, especially government programs that would place the interests of public health, safety and equality above the profits and power of those who already have too much of both, threatens our liberties.

Perhaps in a manner even more successful than Michael Moore’s very powerful presentations in Sicko! and in Capitalism: A Love Story, Robert Kenner and Eric Schlosser, in their Academy Award nominated documentary feature Food, Inc. (trailer posted at end of article), expose the lie behind the myth that so-called “free markets” make us free….

While this piece is intended to cover the tyranny inflicted by a corporate controlled economy, one suspects that most in Food, Inc’s audience will find the film to be a real eye opener when it comes to the dangers posed by what Kenner and Schlosser describe as food-producing “factories,” or what is described in the film’s “press kit” [PDF] as “the Orwellian underbelly that’s been deliberately hidden from the American consumer.”

The film takes the audience to the giant holding pens, formally known as Concentrated Animal Feeding Operations (CAFOs), where corn-fed cattle stand knee deep in their own manure; to sheds, half as long as football fields, where thousands of chickens, bio-engineered to grow so rapidly and large that they are incapable of taking more than a step or two before falling flat on a floor laden with their feces; chickens kept in the dark not to produce a better product but to make them more docile when they are rounded up for slaughter. (In the must-see, deleted scenes we find the mother of a factory chicken farmer who has to keep the windows of her home closed to fend off the noxious odors from the nearby chicken sheds; can’t eat outside because she and her husband would be swarmed with flies).

“If you can grow a chicken in 49 days, why would you want one you gotta grow in three months?,” asks one of the corporate-controlled farmers interviewed in the film.

In a brilliant stroke, Kenner and Schlausser provide stark contrast to the nightmares of factory farming by taking their audience to Polyface Farms where we meet Joel Salatin, the organic farm’s owner who possesses an extraordinary level of country good sense, and who has no taste for corporate greed. There we see cows grazing on grass in an open pasture, while healthy chickens roam about the barnyard.

The CAFOs and the mass produced chicken operations are designed not to improve quality but to maximize profits. The decisions that affect the daily operations of the CAFOs are not made by farmers, but by corporate titans sitting in board rooms in cities sometimes thousands of miles away.

Unfortunately, the corporate engineers, so good at efficiency of mass production, ignored a basic fact of evolutionary biology. Cattle evolved as a grass eating animal. The corn they are fed produces dangerous, potentially lethal, strains of E-coli bacteria which, according to the film’s press kit, “sickens roughly 73,000 Americans annually. And because of the high proliferation of processed foods derived from corn, Americans are facing epidemic levels of diabetes among adults and alarming increases in obesity, especially among children.”

While corn remains a cheap source of feed, thanks to heavy subsidies paid by the U.S. government to these giant agricultural conglomerates (your tax dollars at work), the real cost, especially to the environment, is substantial. Corn must be transported in trucks and trains, and the huge, toxic amounts of manure must be carted away, adding to consumption of fossil fuels and our global climate change footprint.

Meanwhile, Salitin points to his cattle grazing on open land; notes that they are mowing and fertilizing the grass all at the same time — an entire, ecologically efficient system captured in a single frame. (In the deleted scenes, Salitin explains the ecologically efficient, symbiotic relationship between the multiple strains of grass he has never had to plant or replant, his cattle, chickens and pigs, which naturally convert manure into soil enriching compost).

Schlosser asserts that CAFO cattle will experience a more than 80% reduction in E-coli if they are simply taken out to pasture five days prior to their slaughter. Yet the corporate titans, according to Food, Inc., persist on keeping the cattle in the CAFO until they are moved off to be slaughtered. They show carcasses, streaked with excrement, on hooks leading into slaughterhouses. The corporate titans apparently believe it more efficient to fend off infection by bathing the butchered meat in ammonia and ammonia hydroxide.

When they were first introduced during the early days of the New Deal, farm subsidies were intended to stabilize prices in order to offset the extraordinary low prices brought on by over-production and by the Great Depression; to keep farmers on their farms and in their homes.

Today, it would be fair to say that farm subsidies, like Wall Street bailouts, flow to those who need them the least.

In Thieves in High Places, Jim Hightower provides the classic example — billionaire stockbroker Charles R. Schwab; the proud owner of Casa de Patos, “1,500 acres of picturesque wetlands in Northern California.” Schwab grows rice on the land, not for harvesting purposes but because the rice attracts ducks. Schwab is one of those rich folks who likes to invite friends and clients to go duck hunting.

So Schwab has no intent to harvest the rice, but that doesn’t prevent this man with an estimated $4.7 billion net worth from collecting $500,000/year in federal farm subsidies because he does not market the rice.

Hightower laments, “Sadly, it’s legal, and it’s a fine upstanding example of what George [W. Bush] and his base like to call ‘entrepreneurship.'”

As revealed by Jeff Faux in The Global Class War, and as touched upon in Food, Inc., with the 1993 passage of the North American Free Trade Agreement (NAFTA), some of the wealthiest citizens of this country not only gorged themselves at the public trough by way of subsidies, but parlayed this into a means to engage in unfair competition in Mexico, selling corn at well below the cost of production. This drove nearly 1.5 million Mexican farmers off the land, creating a massive migration to Mexico’s cities.

Faux asserts this created an overabundance of cheap labor in the Northern Mexico cities which was exploited by U.S. manufacturers, who saw a golden opportunity to dispose of their unionized U.S. workers, in what amounted to the first step in the wholesale outsourcing of almost everything made in the U.S., save military weapons, first south to Mexico and then to China, India and and other parts east — short term greed with devastating long-term economic consequences.

But the NAFTA scheme entailed much more than Ross Perot’s ominous warning during the 1992 Presidential debates of a “giant sucking sound of jobs headed South.” As Kenner and Schlosser reveal in Food, Inc., when the U.S. subsidized corn drove Mexican farmers off their land, it created a golden opportunity for the meat packing industry to shift to cheap labor even while remaining in the U.S.. American meat packers actively recruited the displaced Mexican farmers, drawing the undocumented into an increasingly consolidated U.S. meat packing industry — an industry which once paid union wages in the 1950s that were on par with the middle class wages in the auto industry.

As a result, the job of meat packing was set back both in terms of economics and safety to levels not seen since Roosevelt — Teddy Roosevelt that is.

From the standpoint of the industrial titans at the top of the U.S. food chain, this maneuver not only provided a ready source of cheap, exploitable labor but came with the added benefit that these recruited Mexican economic refugees could be scapegoated for the misfortunes of the American middle-class whose real demise was occasioned when President Bill Clinton joined with Presidents George H.W. Bush and Ronald Reagan to ram NAFTA through on the fast track.

Curiously, Clinton recently apologized for his role in forcing other countries to accept U.S. agricultural products at the expense of their own agricultural systems, which he admitted, in the case of Haiti, destroyed that impoverished nation’s self sufficiency by eliminating its ability to produce rice.

Clinton conceded that U.S. agricultural policies since 1981 (the year Reagan took office) not only destroyed local economies but undermined their culture and “fabric of life”. While describing the consequences he now has to “live with every day”, the apology from the former President and now Special Envoy to Haiti came with a positive spin that U.S. policy makers were simply trying to “relieve” these nations of the “burden” of food production so they could “leap into the industrial era”. Clinton’s spin ignores the profits, subsidies and monopoly power which flowed to the wealthy CEOs and investors at the top of the corporate U.S. food producing industry.

Previous Article
Three-Pronged System Enables GMO Takeover of American Agriculture
Next Article
Note to Media: The Association of American Physicians and Surgeons (AAPS) is a Right-Wing Group with Fringe Views

Note to Media: The Association of American Physicians and Surgeons (AAPS) is a Right-Wing Group with Fringe Views
Apr 05