Jose Padilla was convicted of helping Al-Qaeda. His lawyers say he was mistreated for years, and that former Defense Secretary Donald Rumsfeld violated Padilla’s civil and constitutional rights. 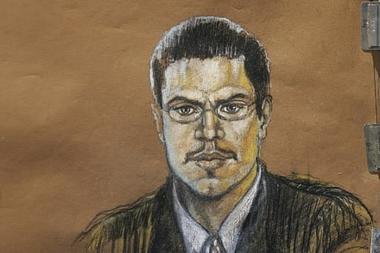 Jose Padilla is seen in this courtroom drawing during the 2007 conspiracy trial in which he was convicted of helping Al-Qaeda. His lawyers say he was mistreated, and that former Defense Secretary Donald Rumsfeld violated Padilla’s civil and constitutional rights.

Lawyers for former Defense Secretary Donald Rumsfeld are asking a federal judge in South Carolina to throw out a lawsuit filed by former enemy combatant Jose Padilla, who was subjected to harsh interrogation tactics in a military prison.

After being designated an enemy combatant by President Bush in 2002, Padilla, a US citizen, was whisked away from the criminal justice system to an isolation cell and interrogation at the Consolidated US Naval Brig in Charleston. He was held without charge for nearly four years.

The Bush administration sought to justify the action in part by claiming Padilla was plotting with Al-Qaeda to detonate a radiological “dirty bomb” in a US city. No evidence of such a plot has been presented in court.

Several of the initial sources of information about Padilla were subjected to waterboarding and other coercive and controversial interrogation techniques at secret CIA interrogation centers overseas. Human rights experts consider these techniques a form of torture that can render provided information unreliable.

There is no allegation that Padilla was waterboarded. But his lawyers say he was subject to “a vicious program of interrogation.”

He was confined to an isolation cell for a 21-month regime of sleep and sensory deprivation. The cell had no mattress, blanket, sheet, or pillow. He was frequently shackled in painful stress positions and threatened with immediate execution unless he gave a full confession of his alleged involvement with Al-Qaeda, according of Padilla’s lawyers.

Padilla’s treatment by the Bush administration attracted international attention and raised fundamental issues about a president’s power to strip a US citizen of his or her constitutional rights by designating him an enemy combatant – even when that citizen was arrested on American soil.

That issue has not reached the US Supreme Court, in part because Padilla was moved backed into the criminal justice system on the eve of the high court considering whether to hear Padilla’s case. The action mooted the constitutional issues raised by Padilla’s lawyers.

Padilla was later convicted in a Miami trial of conspiring to provide material support to Al-Qaeda, but the government offered no evidence at trial of what, if anything, Padilla did for the terror group. He is serving a 17-year prison sentence. His conviction is under appeal.

The civil lawsuit in South Carolina seeks to hold US officials accountable for Padilla’s treatment and the conditions of his confinement during the three and a half years he was held without charge at the brig.

In their briefs to the court, lawyers for Rumsfeld argue that Padilla’s lawsuit should be dismissed because Padilla lacks the necessary legal standing to sue Rumsfeld and other Defense Department officials.

Any injuries suffered by Padilla were the result of President Bush’s authorization that he be treated as an enemy combatant, Rumsfeld’s lawyers say. The president enjoys complete immunity for those actions, they say, so the suit must be thrown out.

“Military detention is a normal and inevitable incident of an enemy combatant designation,” Rumsfeld’s lawyers argue in their brief. Padilla’s assignment to the Charleston brig was “routine and appropriate.”

Padilla’s lawyers counter that Rumsfeld and other officials can be held legally responsible for Padilla’s conditions of confinement and treatment because they each personally participated in violations of Padilla’s constitutional rights.

Rumsfeld helped create the policy of holding Padilla in incommunicado detention insulated from any judicial oversight, they charge. Rumsfeld personally authorized the use of harsh interrogation tactics at Guantanamo and directed brig officials to use the same techniques.

The former defense secretary also directed Justice Department officials to produce legal memos that would immunize from criminal prosecution US officials who participated in the detention and interrogation of enemy combatants – including Padilla, the lawyers say.

Rumsfeld and other Defense Department officials “were privy to regular reports on the interrogation and condition of suspected ‘enemy combatants’ held at the brig,” Padilla’s brief says. “Those reports repeatedly drew attention to the devastating psychological effects that the conditions were having on detainees, including Mr. Padilla.”