" ... Schmitt, who became a professor at the University of Berlin in 1933 (a position he held until the end of World War II), joined the NSDAP on May 1, 1933. He quickly was appointed "Preußischer Staatsrat" (Prussian State Counselor) by Hermann Göring and became the president of the "Vereinigung nationalsozialistischer Juristen" ("Union of National-Socialist Jurists") in November. He thought of his theories as an ideological foundation of the Nazi dictatorship, and a justification of the "Führer" state with regard to legal philosophy, in particular through the concept of auctoritas. Within days of joining the party, Schmitt was party to the burning of books by Jewish authors, rejoicing in the burning "un-German" and "anti-German" material, and calling for a much more extensive purge, to include works by authors influenced by Jewish ideas. ... "

[Mary L. Dudziak is the Judge Edward J. and Ruey L. Guirado Professor of Law, History and Political Science at the University of Southern California Gould School of Law.] 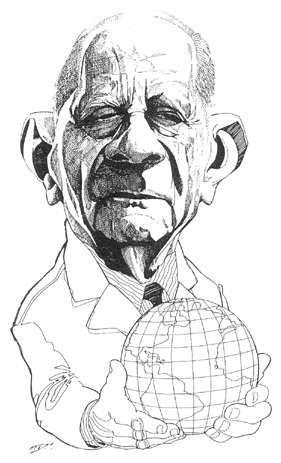 One of the more curious turns in post-9/11 legal scholarship was the embrace of the work of German theorist and “Nazi fellow-traveler” Carl Schmitt. References to Schmitt proliferated in an ongoing discourse of exceptionality (the idea that normal time had been ruptured by non-normal time). Schmitt’s most widely invoked quote was that the “Sovereign is he who decides on the exception.” This seemed to fit the post-9/11 context perfectly, since President Bush had declared that an exceptional moment, a wartime, had commenced with the September 11 attacks. Italian philosopher Georgio Agamben was also turned to. He draws from Schmitt’s theory of sovereignty to develop a radical critique of the modern state, arguing that states of exception tend to become normalized. (The scholarly consensus is described here.)

For American scholars, the ongoing character of the new security age was evidence that an emergency regime was being normalized. Schmitt’s work, drawing from the experience of Weimar Germany, served as an important warning of what can happen when security concerns stemming from war or crisis seep into domestic politics. But the turn to Schmitt and Agamben reinforced a discourse of exceptionality, seeing the post-9/11 years as a departure from normal times. Consistent across this literature was the idea that time had changed on September 11, that it had ushered in a new era.

Citations to Schmitt in legal scholarship steadily increased. A search of the Westlaw legal periodicals database shows twenty-four citations to Schmitt in 2001, twenty-nine in 2002, fifty-one in 2003, and eighty-six in 2009. Important and influential works invoked Schmitt’s ideas.  [These numbers and the chart are based on a search in the Westlaw Journals and Law Reviews database. The search was conducted using a common technique for scholarly impact surveys: a search for carl /2 schmitt. False hits were removed from totals. Many thanks to Paul Moorman of the USC Law Library for help with this.]

While some of this work draws upon Schmitt’s articulation of a state of exception and applies it to various contexts, other works critically engage Schmitt in the context of a wider literature on governmental power.  Panels on Schmitt at scholarly conferences were heavily attended.  Some some scholars pushed back.  Bruce Ackerman argued that reliance on Schmitt made discussions of emergency power melodramatic when they need to be taken seriously. Eric Posner and Adrian Vermeule saw the embrace of Schmitt as tied to an undue focus on Weimar.  That history had received too much attention, they argued.  “Weimar was an unconsolidated and institutionally shaky transitional democracy” of the early twentieth century.  Its relevance for contemporary democracies, which tend to be more stable, “is not obvious.”  But curiously, rather than turn away from Schmitt, they drew from what they considered to be the “marrow” of his ideas, and incorporated that marrow into their analysis of executive power. This illustrates the way invocations of Schmitt became a language for discussions of executive power, even for scholars who decried his influence.

A more searching critique of Schmitt’s influence in American political thought appears in John Brenkman, The Cultural Contradictions of Democracy: Political Thought since September 11.  The political problem posed by Schmitt’s theorem, as Brenkman puts it, is that “since the rule of law rests on the capacity to suspend the rule of law if necessary, whoever declares a state of exception will almost inevitably claim that it is necessary for the preservation of the rule of law and indeed the body politic itself,” even if the claim is specious.

However, claims of emergency do not necessarily lead democracies to unravel.  “Political systems can be resiliently self-correcting, especially as the public’s sense of emergency wanes or the government’s claim of necessity is thrown into doubt.”

More fundamentally, Brenkman argues that Schmitt and Agamben’s formulation of the sovereign as he who declares the exception obscures “the little wedge created by the distinction – and hence the potential gap – between declaration and claim, act and justification, rule and legitimacy.”  It is here, “along these hairline fractures in the discourse of power” that Brenkman finds “the very possibility of a political realm and of democracy.”

Where does this hairline fracture appear in legal thought, and how is it managed?  Legal scholars writing about the post-9/11 era, like those engaging the Cold War and other conflicts, tend to take external events that generate a crisis, like wars, as a given.  The crisis appears to exist out in the world, outside the realm of law, and it is the legal scholar’s task to take up the way those external events affect the law’s functioning.  The crisis exists, and law reacts until the crisis goes away.  This way of thinking is reflected in the current exceptionality discourse which assumes that we are in a form of crisis time that differs from normal time. But following from Brenkman, the exception derives not only from something external, but in the wedge between “declaration and claim, act and justification.”  The need for legitimacy puts the possibility of politics in the middle of the identifying of a state of exception.  The crisis isn’t external to the world of politics that law occupies.  Instead, exceptionality derives from something internal and political: the framing or articulation of crisis, and its justification.

Along that hairline fracture, in that political space, lies the construction of the idea of wartime.  It is there that the narrative work is done, framing an episode as a war, and placing it in the legacy of great American conflicts.  For all the challenges of George W. Bush’s presidency, he succeeded completely in this most fundamental task: rallying the nation behind the idea that we were at war.

The greatest challenge to the exceptionality thesis was simply the facts on the ground.  If the war on terror was a rupture of normal time, then it was inherently temporary, and would last only until normal times returned.  As the era pressed on, Americans turned their focus to their daily lives, even as American troops continued to patrol dangerous territory in Afghanistan and Iraq, and as American unmanned war planes bombed targets in Pakistan.  This was not the normalization of a state of exception, for ongoing smaller-scale wars had been a feature of American international relations since at least the Cold War.  It was instead the passage of what had become normal time in America.

More on this topic will appear in War Time: A Critical History.