Officials: Suspect in diverted flight used to be in Air Force
By the CNN Wire Staff | April 27, 2010 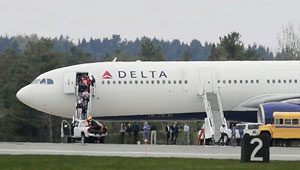 (CNN) -- A man detained after claiming he had explosives on a trans-Atlantic flight Tuesday served in the U.S. Air Force as an intelligence specialist for four years, Air Force officials said.

Delta Air Lines Flight 273, which was heading from Paris, France, to Atlanta, Georgia, was diverted to Bangor, Maine, on Tuesday afternoon after the man made the explosives claim, law enforcement officials said.

Two law enforcement officials identified the passenger as Derek Stansberry of Florida. He held the rank of senior airman and was on active duty from June 2005 to June 2009, according to Air Force officials.

In addition to explosives, Stansberry claimed he had false documents, the law enforcement officials said. Investigators had found no explosives so far, they said.

He was not flagged on any databases, they said. The FBI is leading the investigation with assistance from Immigration and Customs Enforcement, the Transportation Security Administration and the Bangor Police Department, the officials said.

Stansberry trained at Goodfellow Air Force Base in San Angelo, Texas, and also was stationed at Hurlburt Field in Okaloosa County, Florida, according to Air Force officials. He served in Iraq and Afghanistan, according to service records.

Delta's Paul Skrbec said the airline was putting the diverted flight's passengers in a hotel overnight and providing them with a meal and vouchers for future travel. Skrbec said they would leave in the same plane that brought them to Bangor.

Passengers said they were unaware of any disruption, but that the flight crew moved all the passengers forward in the partially filled cabin.

"For some time, we were not told anything," passenger Adithya Sastryi said. "But the pilot came on and told us, 'There has been a security threat,' and that they're trying to get it under control."

Passenger Sandy Zusmann said passengers were first told to buckle up because the plane was heading into turbulence.

"About 45 minutes later to an hour later, they came on and they said, 'As some of you may know, we had a security threat on the flight. That's now under control, but we're going to ask everybody to stay in their seats for the remainder of the flight,'" Zusmann said.

Zusmann said the flight crew members were calm and professional.