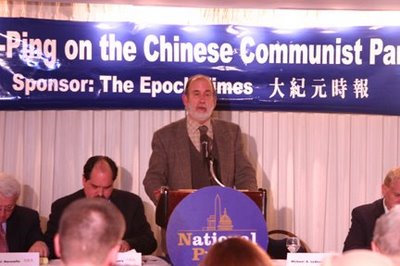 I was really surprised by the news, first reported by Laura Rozen on her blog on Mother Jones, that Michael Ledeen, who had been under Richard Perle’s wing at the American Enterprise Institute (AEI) for some 20 years, has moved to the Foundation for the Defense of Democracy (FDD) and taken his “Freedom” chair with him. I have no inside information on the reasons for the move (I was declared persona non grata at AEI five years ago and told I shouldn’t try to attend any of its events) , and don’t buy his own explanation, although his reference to a “rising” FDD suggests his association there might be more lucrative, particularly as FDD, which earlier this year suffered major Democratic defections, is competing strongly for Sheldon Adelson’s largess. (And I have no doubt at all that Ledeen’s obsession with Iran would definitely appeal to the multi-billionaire casino magnate who reportedly shares that obsession).

One possible explanation is that the AEI’s incoming president (as of Jan. 1), Syracuse University Prof. Arthur Brooks, is hoping that AEI’s public image on foreign policy — dominated as it has been for so long by hard-line neo-cons like Perle — might be softened somewhat. But, while Ledeen clearly belongs on the radical fringe (just read his latest article in the National Review Online (NRO) on how Russia has joined the “terror masters” in Tehran and Damascus and how China is about to invade Taiwan), he’s certainly not nearly as visible as someone like former UN Amb. John Bolton, a bona fide extremist (albeit more nationalist than neo-con). On the other hand, Bolton’s frequent op-eds in the Wall Street Journal and the Telegraph, if not his cachet as a Bush alumnus willing to denounce his former boss as an appeaser to the mainstream press, no doubt raises a lot more money for AEI. By contrast, Ledeen’s relative obscurity probably attracts only a few grateful donors.

Indeed, apart from National Review Online, on which he appears to be publishing less and less, Ledeen has become lincreasingly invisible over the last couple of years, rarely participating even in AEI forums, so his departure may be due to the fact that he’s simply not producing enough. (I understand that his colleague, Joshua Muravchik, has recently been complaining worryingly to friends that AEI management has been pressing him to publish more.) In fact, a quick review of Nexis over the past three years shows that his annual article output for NRO has fallen quite sharply from more than 40 in the Aug 2005-06 period to just 18 in the last Aug 2007-08 period, which is particularly remarkable given all the speculation over the past year about attacking Iran. His television appearances also declined over the past two years, while his latest book, The Iranian Time Bomb (Sept 2007), was all but ignored by the major newspapers (with the exception of the New York Times which predictably panned it).

I would think that FDD, while certainly part of the same Likudist network as AEI’s Middle East cadre, marks a major comedown in prestige and power for Ledeen, and I have a hard time believing that he would go there willingly unless he were offered significantly more money than he is able to earn from his AEI perch. In Time Bomb, Ledeen stressed what a “singular blessing” it has been to work at AEI “where I can find out most anything I need to know by walking down the hall and asking some brilliant and collegial person.” And he singled out for praise the outgoing DeMuth who, he noted, has “always supported my work…” So, was he pushed, or did he jump? Either way, it’s an intriguing development.