CasaPound, named after the American poet, was supported by a racist who killed two African men in Florence 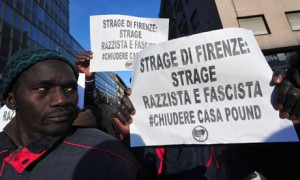 Ezra Pound, the 20th-century American poet who wrote The Cantos, was known for his fascist sympathies and antisemitism.

But his daughter is now taking action to defend his reputation after an Italian fascist organisation named itself after the poet.

Mary de Rachewiltz, 86, has launched a lawsuit to force the far-right group CasaPound, which has about 5,000 members, to change its name.

“A politically compromised organisation like this has no business using the name Pound,” said De Rachewiltz, who lives in a hilltop castle in northern Italy where she reads The Cantos to students.

She said she had first planned to act two years ago “when I understood CasaPound had spread outside Rome”, but had redoubled her efforts after a CasaPound sympathiser went on a shooting spree in Florence on 13 December, killing two Senegalese men and wounding three others before killing himself.

“This affected me terribly. It was the last straw,” she told the Guardian. “I studied in Florence which makes it that much more painful.”

Pound was a leading light on the London poetry scene before the first world war, helping launch the career of TS Eliot.

Having moved to Italy, he developed a passion for Benito Mussolini‘s brand of fascism, defending him in radio broadcasts to the US during the second world war. He was captured by US troops in 1945, then declared insane and locked up for 12 years.

Taking a lead from Pound’s fascist ideals and denouncement of usury, CasaPound campaigns for cheap public housing but has been accused of attracting violent supporters. A Rome member was arrested last month on suspicion of assaulting leftwing activists.

Gianluca Casseri, the Florence killer, was not a member but spoke at CasaPound meetings in Tuscany. The group has since distanced itself from him.

An official said Pound’s daughter had no reason to object to CasaPound’s name. “We are very sorry about this. She doesn’t really know about us. We are not racist or violent,” said Simone di Stefano. “We would like to resolve this out of the courts – Pound is not a trademark and anyone can refer to his ideas.”

De Rachewiltz responded: “Pound was not leftwing or rightwing and you have to understand The Cantos to understand that. It is also a question of style. I have seen pictures of their shaven-headed leader and it does not impress me.”

Homeless are not Criminals
Dec 24