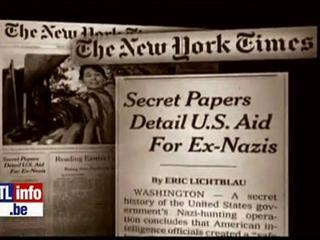 Since the assumption of Western benevolence is difficult to square with the ugly reality of Western imperialism, WWII is routinely invoked in an effort to demonstrate that supposed benevolence.

Nearly seventy years since the defeat of Nazi Germany, there is still plenty of political mileage in assuming the mantle of the allied victors of 1945. In recent months politicians and journalists, on both sides of the Atlantic have frequently resorted to the use-weary Hitler analogy to describe Vladimir Putin’s actions in the Ukraine. In March of this year, Hillary Clinton compared Putin’s policy in the Ukraine to Nazi Germany’s absorption of Czechoslovakia in the late 1930s. Whilst in early September David Cameron raised the spectre of Chamberlain at Munich to warn of the grave dangers of appeasing the Russians. Putin for his part has repeatedly cited the history of Ukrainian collaboration with the Nazis against the Soviet Union in order to tar his opponents in the Ukraine with the brush of fascism. The reason that the present-day leaders of the allied states reflexively reach for the Hitler analogy to justify their current policies is not difficult to discern.

Unlike the First World War (which, in spite of recent revisionist efforts, is widely and accurately seen as bloodbath instigated by competing imperial powers) and the Cold War era of brutal proxy wars, World War II is for the most part seen as an unambiguously noble endeavour. In the popular imagination few symbolize that essential nobility better than Britain’s wartime leader, Winston Churchill. For instance in 2002 in a BBC poll Churchill was voted, by a wide margin, the greatest historical figure in Britain’s history. Churchill was undoubtedly an impressive rhetorician and Britain was fortunate that such a charismatic leader was not, unlike many of his political persuasion and social class, in favour of appeasement or even alliance with Nazi Germany. Nonetheless, Churchill’s views on fascism and his reasons for opposing Nazi Germany were not as laudable as one might glean from conventional depictions of him. A vehement opponent of Soviet communism, Churchill viewed fascism as a bulwark against socialism and approved of the destruction of the German and Italian labour movements. So taken with Italian fascism was Churchill that in the late 1920s he declared that had he been Italian he would have fought alongside Mussolini against the Italian left:

“I could not help being charmed, like so many other people have been, by Signor Mussolini’s gentle and simple bearing and by his calm, detached poise in spite of so many burdens and dangers. Secondly, anyone could see that he thought of nothing but the lasting good, as he understood it, of the Italian people, and that no lesser interest was of the slightest consequence to him. If I had been an Italian I am sure that I should have been whole-heartedly with you from the start to finish in your triumphant struggle against the bestial appetites and passions of Leninism.”

Churchill was also a stalwart supporter of the British empire, which at the outbreak of WWII continued to deny democratic and civil rights to millions of imperial subjects. Far from viewing WWII as a struggle for democracy, Churchill explicitly declared that he had not assumed the prime ministership of Britain in order to preside over the decline of the British empire.

During the war there was a sharp divide between the often idealistic motives of ordinary soldiers and those of their political leaders, who were motivated strictly by the dictates of realpolitik. To men such as Churchill and Franklin D. Roosevelt the problem with Nazi Germany was not its internal repressiveness, but rather that it was bent on global hegemony and hence threatened their own spheres of control. Had Hitler been content to maintain a more limited empire, whilst maintaining German integration in the world economy, it is likely that his horrific policies regarding German minorities and the German left would have been indulged – just as various third world Hitlers (Pinochet in chile, the Argentine and Brazilian generals, Trujillo in the Dominican republic, the Duvalier dictatorship in Haiti, Suharto in Indonesia, Ríos Montt in Guatemala, amongst others) were supported by the West during the Cold War and subsequently. Although, unlike Hitler, he was never a meaningful threat to the United States and her allies, the trajectory of Western relations with Saddam Hussein has certain parallels with the attitudes of Western elites towards fascism in the 1930s. Hussein, like Mussolini and Hitler, was indulged by the West so long as he restricted himself to committing atrocities against Western enemies and those whose fate the Western powers were indifferent to. During the Iran-Iraq war, U.S. intelligence furnished Iraq with information regarding Iranian troop movements – with foreknowledge that said data would be used to launch chemical attacks on Iranian soldiers. Hussein’s most notorious atrocity – the chemical attack on Kurdish civilians at Halabja in 1988 did not dissuade the West from supporting him. It was not until after Hussein had proved his unreliability by threatening Western interests in the Middle East in 1990 that Halabja was used extensively by Western leaders and journalists to condemn the Baathist regime.

Western ambivalence towards fascism is further revealed by contemplating allied policy towards anti-fascist partisans at the end of the war. In France and Italy the conservative establishment were enthusiastic collaborators with domestic fascism – leaving the fight against the latter primarily to socialist and communist based groups. The leftist partisans had no intention of allowing the restoration of the pre-war social order and were determined to construct a more just society in the ruins of the old. Correctly perceiving the threat posed to the traditional order, leaders such as Churchill instructed allied forces to treat areas liberated by anti-fascist militias as enemy territory. In Italy, Greece, and elsewhere allied forces wrested control from leftist partisans and returned the old and discredited conservative elites to power. In the case of Italy, following Churchill’s advice, a dictatorship under the fascist Marshall Bagdolio and the Italian King (a collaborator with Mussolini until it became apparent that Italy would lose the war) was established by the Americans. Such actions occurred with the tacit support of Stalin, who had little interest in the development of an alternative model to the authoritarian deviation from Marxist thought that the Soviet Union represented.

Just as the Western powers restored conservative elites in Europe, so they also sought to reinstitute colonialism in those parts of the European empire that had been annexed by Japan. In French Indochina, the British intervened to restore French colonialism – a task later taken up by the Americans who bankrolled the French war against the Vietminh in the 1950s. My own grandfather, who spent the war in the Dutch merchant navy, was engaged after the war in ferrying Dutch troops to the Dutch East Indies, deployed there by the Dutch government to put down the Indonesian revolt against Dutch colonial rule. In South Korea, which had never been under European colonial control, the Americans stripped power from the leftist People’s Committees that took power in Korean cities following the withdrawal of the Japanese. They then handed control to the collaborationist Korean elite – thereby setting the stage for decades of repressive dictatorship in the southern part of the Korean peninsula.

Much of the moral authority of the allies derives from the fact that in fighting Nazi Germany they were at war with the architects of perhaps the most awful crime in human history – the Nazi holocaust. However, there is little reason to believe that the destruction of European Jewry entered into the moral calculus of Western leaders (not to mention Stalin, who instigated appalling antisemitic programmes of his own). Britain and the United States blocked large scale Jewish immigration in the pre-war period and then refused the entreaties of Jewish leaders to bomb the railway tracks carrying Jews to the death camps and the camp installations themselves. Szmul Zygielbojm, one of the Jewish members of the national council of the Polish government in exile, was so distressed by Western indifference to the suffering of Europe’s Jews that he took his own life in protest at allied inaction. Furthermore, engagement in the most barbarous atrocities was no barrier to post-war employment by the allies for those Germans and Japanese who were considered to be of instrumental value. Reinhard Gehlen, Klaus Barbie, and the architects of the Japanese biological weapons programme were amongst those axis war criminals who were to find themselves in Western employ after the war. Churchill, for his part, like many conservatives of the era, was an open antisemite and in complete agreement with the Nazi depiction of Bolshevism as little more than a Jewish conspiracy. Whilst not approaching the Nazis in their virulent racism, he also diagnosed a “Jewish problem” in Germany. As he said in 1920:

“The part played in the creation of Bolshevism and in the actual bringing about of the Russian Revolution by these international and for the most part atheistic Jews … is certainly a very great one; it probably outweighs all others. With the notable exception of Lenin, the majority of the leading figures are Jews. Moreover, the principal inspiration and driving power comes from Jewish leaders … The same evil prominence was obtained by Jews in Hungary and Germany, especially Bavaria. Although in all these countries there are many non-Jews every whit as bad as the worst of the Jewish revolutionaries, the part played by the latter in proportion to their numbers in the population is astonishing.”

As of this writing the United States and her allies are once again raining down bombs on Iraq with the usual boilerplate humanitarian pretext. Public support for western interventions in the Middle East and elsewhere depends very heavily on the belief that the Western democratic states are fundamentally benign actors in world affairs. Since that assumption is difficult to square with the ugly reality of Western imperialism WWII is routinely invoked in an effort to demonstrate that supposed benevolence. Indeed it is hard to think of a post-Cold War era conflict involving the United States and her allies in which Nazi comparisons have not been drawn – from Libya to the former Yugoslavia, Iraq and beyond. If we wish to restrain the Western powers from routine intervention in the global south we would do well to blunt the power of this particular propaganda tool by endeavouring to see that a more critical picture of the Second World War is known to the publics of the imperial societies.