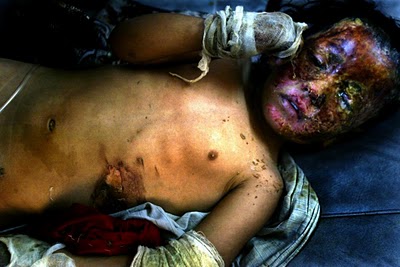 The Iraq war has become a disaster that we have chosen to forget
Madeleine Bunting
Monday November 5, 2007
The Guardian

'You think you are innocent, but you're not," said the British Muslim suicide bomber in the Channel 4 television drama Britz last week. As the compelling actor Manjinder Virk recited her suicide statement to camera, she went on: thousands of women and children are dying every day in Iraq and Afghanistan, and yet the governments responsible have been returned to power.

Her assertion sticks in the mind because it goes straight to the heart of how we choose to forget, choose not to understand; and how from such choices it becomes possible to imagine our innocence.

That's not to say that her own moral choices were defensible - she blew up herself, her beloved brother, fellow Muslims and plenty of women in the crowd - but the challenge even from such a morally flawed character persists. Can we claim innocence of the chaotic violence of Iraq now normalised into the background of our lives? Suicide bombs have long since become routine radio noise. We're numbed to the atrocities; except for some stalwarts, the initial anti-war activism has been crowded out by other responsibilities. Life goes on, even if in Baghdad it frequently doesn't.

And to accompany the indifference is the creeping denial of responsibility. Government ministers now talk of Iraq as a tragedy, as if it was a natural disaster and they had no hand in its making. There's a public revulsion at the violent sectarian struggles best summed up as "a plague on all their houses", as even the horror gives way to exhaustion.

The irony is that in this great age of communications and saturation media, this is perhaps the most important war to become nigh on impossible to report. Unless the reporter is embedded with the occupation forces, it takes either terrifying courage or extraordinary ingenuity to bring images to our screens of those caught up in the awful maelstrom of this imploded country. Without the human stories that bring people and their suffering so vividly to life, there is little chance of public opinion re-engaging with the biggest political calamity of our time.

The Iraq war represents the end of the media as a major actor in war. In Bosnia journalists stirred western Europe's conscience with their vivid accounts; these were people we came to understand, recognise and empathise with, and public opinion forced recalcitrant governments to take note and act. It was a lesson not lost on the Kosovans: they ensured the media saw every atrocity, and the coverage was used to secure a comparable outcome to Bosnia - western governments were forced to act. But in Iraq the number of journalists killed (now at least 138) means that this war is near private - the images and people who might make the horror of this war real don't reach our screens. It's no longer a war that is accessible to public scrutiny or to democratic engagement.

It may have been Iraqi suspicion of western media that ensured this outcome, but it's one that serves US interests nicely. The indifference, the exhaustion and the difficulty of reporting leaves the US forces with arguably a freer hand than they have had in any field of operations for decades. While the Americans and the British keep trying to persuade their public that the war is over - a habit initiated by George Bush himself when he announced his pyrrhic victory on an aircraft carrier in the Gulf in May 2003 - they can carry on fighting it. And there are plenty of people only too eager to hope their political leaders are right and that the whole problem of a country they never knew much about just goes away.

All of which makes the achievement of the few who do break through this news blackout all the more remarkable - Ghaith Abdul-Ahad on this paper, and the Guardian's Emmy-winning film made by an Iraqi doctor on his Baghdad hospital, for example. This week a book is published by another: Dahr Jamail was a mountain guide in Alaska in 2003 who began to take an interest in US foreign policy and ended up picking up his backpack and swapping American mountains for Baghdad and Falluja, driven by a fierce moral imperative that "as a US citizen he was complicit in the devastation of Iraq". After more than three years of reporting he has post-traumatic stress disorder, but has not lost his conviction that "if the people of the United States had the real story about what their government has done in Iraq, the occupation would already have ended".

What is chilling about Jamail's accounts is the routine destructiveness of the US forces; how they demolish nearby homes after a roadside bomb, leave unexploded munitions in the fields of farmers who don't give information, bulldoze orchards. Livelihoods destroyed, families displaced every day, incubating hatred. One of the worst episodes occurred when Jamail's friend was caught by chance at prayer time in a mosque when worshippers were shot dead, with children trapped in the mayhem: a holy place desecrated in a US operation. We may know nothing of such routine details of the prosecution of this war, but these are the stories filling the Arabic media. Across the Muslim world they are taken as irrefutable evidence of the humiliation and persecution of their Islamic faith. We can only pretend we don't understand.

In the meantime, the biggest human displacement crisis in the Middle East for 60 years is unfolding, the fastest growing refugee crisis in the world. One in six Iraqis has now been displaced, 60,000 a month are leaving the country, spilling into Syria (1.4 million) and Jordan (750,000). In an uncanny magnification of our own anxieties about migration and the strain on public services, the capacities of these two Middle Eastern countries to educate thousands of traumatised children or provide basic healthcare have been swamped. The UN's budget for refugees in Syria for 2007 is $700,000 - less than a dollar per person. But this crisis offers no telegenic vistas - people are crammed into the apartments of friends rather than tents on a windy African plain. So it gets even less attention.

Of these millions, Britain confirmed last week that it will take just 500 refugees with a record of having worked for British forces. It drags its feet over offering any more assistance for dispersal, despite requests from the UN; of 123 from Jordan whom the UN have allocated to Britain on tight criteria of having relatives in this country to provide for them, we have so far accepted only three. Britain washes its hands of the consequences of its invasion with the US. There's a horrible contradiction here: those in power accept no responsibility. Those who might have a sense of responsibility feel utterly powerless.

It can take a generation or more for people to grasp the significance and magnitude of historical events. Facts that are infinitely more bizarre and awful than fiction - as Naomi Klein's book The Shock Doctrine documents - take a long time to be fully absorbed. The Iraq war has been about the abject failure of democracy: governments have not been held to account for a war that has squandered lives, billions in public money and the stability of an entire region with reckless criminality.

· Dahr Jamail speaks at War, Truth and the Media, a conference at the London School of Economics, on November 17