The Indefinite Detention of Citizens and Non-Citizens Under the NDAA/Is the NDAA Illegal?

Indefinite Detention of Citizens and Non-Citizens Under the NDAA 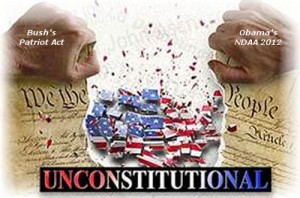 Last week was the tenth anniversary of the military prison at Guantanamo, with newspapers dutifully marking the occasion with “Guantanamo at Ten” columns, op-eds and blog posts. A handful of papers, including the San Francisco Chronicle, the Philadelphia Inquirer and the Miami Herald, even ran editorials calling for the prison’s closure.

It was a blip in media exposure for the 171 prisoners at the facility, who have otherwise been largely forgotten.  Guantanamo has fallen off the headlines in the last couple of years, attracting minimal journalistic scrutiny and scant public interest. Few Americans seem to care that the facility is still open and an even smaller number are actively pressing for it to close.

The lack of concern is unfortunate.  It is especially troubling given that indefinite detention without charge—the issue that Guantanamo embodies—has generated heated debate in recent months.

The Indefinite Detention of US Citizens

The passage of the National Defense Authorization Act (NDAA), a federal statute essentially meant to codify the Guantanamo approach to justice, evoked a fair measure of outrage and alarm. Right wing radio announcer Rush Limbaugh condemned the new law as “total authoritarianism,” and liberal law professor Jonathan Turley warned that it was “one of the greatest rollbacks of civil liberties in the history of our country” — an unusual and possibly unprecedented coincidence of views.  Online petition sites are overflowing with calls for the NDAA’s repeal, at least one of which has tens of thousands of signatories, and some are even demanding the recall of the “treasonous” members of Congress who voted for the legislation.

But most of the op-eds, editorials, and blog posts denouncing the detention provisions of the NDAA had little to say about the Yemenis, Afghans, Kuwaitis and other non-US citizens who have been held at Guantanamo for the past decade.  Turley’s jeremiad did not even mention Guantanamo; nor did Limbaugh, in his radio harangue.

The civil liberties issue that has resonated with the American public is the possibility that American citizens suspected of terrorism could be picked up by US military forces and held indefinitely without charge.  This is a non-trivial concern, at least in the long term, given the language of the relevant provisions of the NDAA, which does not distinguish between citizens and non-citizens; given post-9/11 detention practices (US citizen Jose Padilla was arrested in Chicago in 2002 and held in military custody for three-and-a-half years without charge), and given the unsettled state of Supreme Court precedent on these questions.

But the theoretical possibility that an American citizen could be held indefinitely pales, in real human terms, next to the indisputable fact that 171 non-citizens remain behind bars at Guantanamo, all but five of them without formal charge. (Four prisoners have been convicted and one is facing terrorism and other charges.)

Whatever the NDAA may mean for Americans—and I should be clear that I think it is very bad news—it is worse for non-citizens. It was clearly designed to obstruct Guantanamo’s closure, to coerce President Obama into using military options when dealing with non-citizens suspected of terrorism, if not force him to do so, and to raise the political and procedural costs of relying on the civilian justice system.

Americans are not the only ones who cherish liberty.  The families of the 171 men detained without charge at Guantanamo, though they have no electoral means to influence US policy and little sway with the US public, believe their loved ones deserve a fair process for adjudicating their guilt or innocence.

Think about it.  Are you outraged at the thought of being held without charge by your own government?  Now consider being held indefinitely by someone else’s government.

Joanne Mariner, a Justia columnist, is the director of Hunter College’s Human Rights Program. She is an expert on human rights, counterterrorism, and international humanitarian law.

Is the NDAA illegal?

… The state of Virginia has  declared the NDAA illegal. Arizona, Tennessee, Washington, and Cherokee  County, Kansas have passed or are developing similar legislation, which will  render it unlawful for local officials to cooperate with federal investigators  or U.S. armed forces trying to arrest citizens under the NDAA. These challenges  are being made under the 10th amendment to the U.S. Constitution, which gives  states ultimate sovereignty. A group called the Tenth  Amendment Centeris offering local governments assistance in nullifying the  NDAA in their districts. Severe criticism of the NDAA has been leveled by the  American Civil Liberties Union (ACLU) and the Bill of Rights Defense Committee.  This is a very serious set of events that is very much underreported in the U.S.  media.

The NDAA  was signed into law by President Obama on December 31, 2011 and went into effect  on March 1, 2012. Although the NDAA is designed to aid in preventing terrorism,  critics say that the language is so vague that any U.S. citizen can be targeted.  StopNDAA.org notes that political activists are especially vulnerable.  …

Some claim that “waivers” demanded by President Obama soften the bill, but  critics note that the waivers do not prevent covered persons from being arrested  and detained under the act.  Only the requirement that they must be  arrested is waived. However confusing the NDAA itself may be as a document,  President Obama attached a signing statement that shows how it may be  interpreted, or at least how he interprets it.  In his statement he promises not  to use the NDAA to arrest U.S. citizens or to deny them due process, making it  clear that he believes that he, and all future presidents, do have that power.

How is the NDAA being  interpreted?

When President Obama ordered the  assassination of U.S. citizen Anwar al-Awlaki earlier in 2011, al-Awlaki was  already treated as if he no longer had rights—because he worked with terrorist  groups. Most U.S. citizens have nothing to fear because they do not associate  with al-Qaeda in any way; most people have never and will never commit a  “belligerent act.” However, the concern is that if due process is denied to all suspects, then no evidence of any such associations or acts will be  necessary to make anyone a “covered person” under the law.  At some point in our  political future, there may be a corrupt executive arm that could use the NDAA  to get rid of political opponents or other inconvenient persons.

Although we can only speculate how  these terms might be interpreted in the future, we can find some examples of how  existing legislation is currently being put into practice by a government  agency.  The U.S. Department of Homeland Security has supported a study  to help officials identify suspected terrorists. Although these reports are  informational only and do not necessarily reflect the view of the Department of  Homeland Security, the findings have been written into an instructional brochure  and distributed to those who will be facilitating arrests of “suspects.” The  targeted groups include, but are not limited to “extremists” who are:  “Islamists” or  “anti-global, suspicious of centralized federal authority,  reverent of individual liberty…” or  “regionally concentrated groups with a  history of organized political autonomy with their own state…” or  “obsessively  focus[ed] on very specific or narrowly-defined causes (e.g., anti-nuclear)…” or  “[have] conspiracy theories about Westerners (e.g. the CIA arranged for 9/11 to  legitimize the invasion of foreign lands).” …

Well-established activist groups that  peacefully and legally challenge and question government actions and policies,  such as Greenpeace or Architects  and Engineers for 9/11 Truth, are clear targets in these descriptions.  Muslims, members of the libertarian party, as well as legislators in the states  of Virginia, Arizona, Tennessee, Washington and Kansas might also be included in  this too-vague description of potential terrorists. …