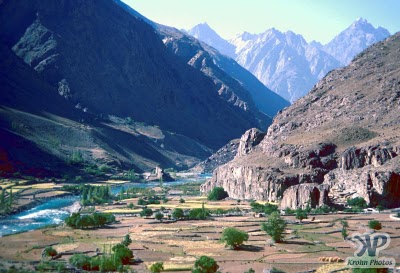 Al Qaeda – gathering strength in the craggy wastes of of Pakistan, mustering for a terror war with the United States?

The National Counterterrorism Center (NCTC) – initially directed by John Negroponte – was the source of the Bush administration’s claim that Al Qaeda is thriving in the mountains of Pakistan. Most of the information on the NCTC attached below is from the Center’s own web site. – AC

Six years after the Bush administration declared war on al-Qaeda, the terrorist network is gaining strength and has established a safe haven in remote tribal areas of western Pakistan for training and planning attacks, according to a new Bush administration intelligence report to be discussed today at a White House meeting.

The report, a five-page threat assessment compiled by the NATIONAL COUNTERTERRORISM CENTER, is titled “Al-Qaida Better Positioned to Strike the West,” intelligence officials said. It concludes that the group has significantly rebuilt itself despite concerted U.S. attempts to smash the network. …

NEGROPONTE and the NCTC

” … Porter Goss was not Cheney’s man, because Cheney favored John D. Negroponte, the ‘sunny boy’ of Conservatives. Negroponte was charged with the most serious reform of the American intelligence community in the last 50 years. He was appointed to a new post, Director of National Intelligence (DNI) and instructed to implement the recommendations of the Robb-Silberman commission on weapons of mass destruction. … ”

“Known by the initials NCTC, the center is normally off-limits — CBS News is not allowed to tell you exactly where this building is. But we were given unprecedented access to the brand new state-of-the-art nerve center. … CBS News was not allowed to stay long in the top-secret meeting — and when you listen to the roll call, you understand why. On the lines are representatives from all the intelligence agencies including the CIA, the NSA plus the White House. … ”

Prior to NCTC, VADM Redd served as Executive Director for the Commission on the Intelligence Capabilities of the United States Regarding Weapons of Mass Destruction. The Commission’s report was adopted as the President’s blueprint for implementation of Intelligence Community reform. Earlier in 2004, VADM Redd served as Deputy Administrator and Chief Operating Officer (COO) of the Coalition Provisional Authority (CPA) in Baghdad, Iraq.

A native of Sidney, Iowa, VADM Redd graduated from the United States Naval Academy in the class of 1966. A Trident Scholar, he majored in mathematics and physics. Following graduation, he studied as a Fulbright Scholar in Uruguay and as a Burke Scholar, receiving a Master of Science degree in Operations Analysis from the Naval Postgraduate School. He also attended the Program for Senior Executives at the Massachusetts Institute of Technology (MIT).

During his 36 years of active duty service he commanded eight organizations and served in several senior policy positions in the Pentagon. His last assignment on active duty was as Director of Strategic Plans and Policy (DJ-5) on the Joint Staff. In 1995, he founded the only new US Navy Fleet in half a century, serving as the first Commander FIFTH Fleet (COMFIFTHFLT) since the World War II era. VADM Redd retired from active military service in 1998.

Following retirement from the Navy he served as CEO of NetSchools Corp., a high-tech start-up company in the education sector.

Prior to joining the National Counterterrorism Center (NCTC), Michael E. Leiter served as the Deputy Chief of Staff for the Office of the Director of National Intelligence (ODNI). In this role, Mr. Leiter assisted in the establishment of the ODNI and coordinated all internal and external operations for the ODNI, to include relationships with the White House, the Departments of Defense, State, Justice, and Homeland Security, the Central Intelligence Agency, and the Congress. He was also involved in the development of national intelligence centers, including NCTC and the National Counterproliferation Center, and their integration into the larger Intelligence Community. In addition, he served as an intelligence and policy advisor to the DNI and PDDNI.

Before his service with the ODNI, Mr. Leiter served as the Deputy General Counsel and Assistant Director of the President’s Commission on the Intelligence Capabilities of the United States Regarding Weapons of Mass Destruction (the “Robb-Silberman Commission”). While with the Robb-Silberman Commission, Mr. Leiter focused on reforms of the U.S. Intelligence Community, in particular the development of what is now the National Security Branch of the FBI. From 2002 until 2005, he served with the Department of Justice as an Assistant United States Attorney for the Eastern District of Virginia. At the Justice Department, Mr. Leiter prosecuted a wide-variety of federal crimes, including narcotics offenses, organized crime and racketeering, capital murder, and money laundering.

Immediately prior to his Justice Department service, Mr. Leiter served as a law clerk to Associate Justice Stephen G. Breyer of the Supreme Court of the United States, and to Chief Judge Michael Boudin of the U.S. Court of Appeals for the First Circuit. From 1991 until 1997, he served as a Naval Flight Officer flying EA-6B Prowlers in the U.S. Navy, participating in U.S., NATO, and UN operations in the former Yugoslavia and Iraq. Mr. Leiter also served as a Harvard Law School human rights fellow with the International Criminal Tribunal for the Former Yugoslavia in The Hague.

NCTC comprises employees from partner organizations that include: Central Intelligence Agency; Department of Justice/Federal Bureau of Investigation; Departments of State, Defense, and Homeland Security; and other entities that provide unique expertise such as the Departments of Energy, Treasury, Agriculture, Transportation, and Health and Human Services; Nuclear Regulatory Commission; and the US Capitol Hill Police. The NCTC also maintains productive relationships with foreign partners. It is the diversity of backgrounds and disciplines fused together in an integrated environment that enriches the NCTC analysis, provides alternative perspectives, and breaks down cultural and physical barriers. The Center provides a unique environment to optimize the USG’s collective knowledge and formidable capabilities to identify and counter the terrorist threat to the nation.