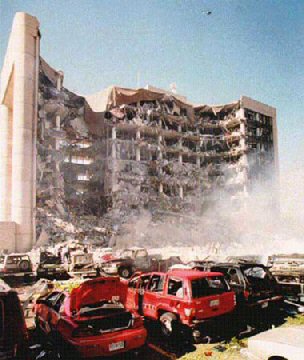 A federal judge in Utah says the Central Intelligence Agency can withhold documents on the Oklahoma City bombing investigation and prosecution, agreeing that the records were properly withheld for national security and other reasons.

The ruling by U.S. District Judge Clark Waddoups reveals for the first time that the CIA worked with the Department of Justice on the bombing probe, according to Salt Lake City attorney Jesse Trentadue, who requested the records under the federal Freedom of Information Act (FOIA).

Twelve documents connected to the investigation were at issue, including an April 20, 1995, cable that outlines a prosecutor's attempt to extradite an "organized crime figure from another country." Other records include cables sent in April and May 1995 relaying information provided to a U.S. ambassador by a foreign official; information from a "foreign liason contact" that is classified as secret; and information from a foreign government about the possible identification of a suspect in the bombing.

The general descriptions were provided by the CIA in refusing Trentadue's FOIA requests for documents on potential involvement of foreign nationals in the attack. The lawyer -- who received some documents with only the name of the agency to which they were directed and others that were withheld entirely -- argues in his suit that the dozen documents should have been released to him.

The CIA says it complied with FOIA and that each document falls under a category exempting it from release. The agency and Trentadue both filed motions asking Waddoups to find in their favor in the dispute, leading to the judge's ruling on Friday.

Trentadue believes the records could provide information about the death of his brother in a federal prison cell in Oklahoma City a few months after the April 19, 1995, bombing that killed 168 people at the Alfred P. Murrah Federal Building. Kenneth Trentadue, a 44-year-old convicted bank robber who was being held on an alleged parole violation, was found hanged in August 1995.

Authorities say Trentadue committed suicide, but his family believes the inmate was mistaken for a bombing conspirator and that guards strangled him with a set of plastic handcuffs in an interrogation that got out of hand. To support that theory, Jesse Trentadue has filed several lawsuits over the years in Utah's federal court seeking records on the bombing investigation. The suit before Waddoups was filed in 2008.

Timothy McVeigh was convicted of carrying out the bombing and executed in 2001. Conspirator Terry Nichols is serving a life sentence at the U.S. Penitentiary Administrative Maximum Facility in Florence, Colo.

Documents requested by Trentadue include ones on Andreas Carl Strassmeir, a German national who he believes might have been an associate of McVeigh.

On a separate issue, Trentadue on Monday filed a motion asking Waddoups to order the government to produce videotapes collected from surveillance cameras on the exterior of the Murrah Building on the morning of the bombing. The motion says the FBI has not responded to his requests for those tapes.

A Freedom of Information Act (FOIA) request filed with the CIA by Salt Lake City attorney Jesse Trentadue – who has been seeking heretofore unknown government documents pertaining to the 1995 bombing of the Alfred P. Murrah Federal Building in Oklahoma City - shows Intelligence Community (IC) imagery assets were used in the investigation.

In response to the CIA’s compliance with Trentadue’s FOIA, the CIA referred his request to the National Geospatial-Intelligence Agency (NGA) because the authority to declassify or redact 26 documents the CIA found responsive to his request rested with the NGA, the agency tasked with coherently managing the disciplines of imagery and imagery intelligence.

The NGA, however, “denied in full” the documents on the grounds that “unauthorized release of this information could cause grave damage to our national security,” wrote NGA’s Paul Polk, “Initial Denial Authority” for the Agency.

Classified materials that are deemed to cause "grave damage" to national security if they were made public carry the “top secret” classification under presidential Executive Order 13292 dated March 25, 2003.

What seems to be implied by the NGA’s response to Trentadue is that highly classified IC imagery assets were made available as part of the investigation. The use of IC imagery satellites domestically though was not without precedent at the time for purposes of national security, domestic law enforcement and other authorized purposes.

Indeed. A May 1 1995 document, “CIA Support to Law Enforcement Investigation of Oklahoma City Bombing,” from the chief of the CIA's Counterterrorist Center (CTC) declassified in July 2005, stated that “at FBI request, CIA provided pre- and post-blast imagery to facilitate forensic examination of the blast site” as part of the CIA commitment “to expand the Counterterrorist Center to strengthen its ability to perform its mission, including its role of supporting US law enforcement.”

At the time of the bombing, imagery satellite tasking was under the authority of the CIA’s Central Imagery Office, whose mission was to ensure that the “needs for imagery are met effectively and efficiently in a manner conducive to national security” for the Department of Defense, the Central Intelligence Agency and other federal government departments and agencies on matters concerning imagery relating to the national security.

The NGA responded to Trentadue’s FOIA of CIA documents on the bombing because the NGA had absorbed the CIO when its predecessor, the National Imagery and Mapping Agency (NIMA), was established on October 1, 1996, by the National Defense Authorization Act for Fiscal Year 1997.

The creation of NIMA, which centralized responsibility for imagery and mapping, followed more than a year of study, debate and planning by the defense, intelligence and policy-making communities. NIMA brought together the old Defense Mapping Agency, the CIO and the CIA’s National Photographic Interpretation Center (NPIC) and Defense Dissemination Program Office (DDPO) in their entirety. Also merged into NIMA were the imagery exploitation, dissemination and processing elements of the Defense Intelligence Agency, National Reconnaissance Office and the Defense Airborne Reconnaissance Office.

Efforts by the Department of Homeland Security (DHS) to establish a National Applications Office (NAO) within the Department's Office of Intelligence & Analysis to coordinate the use of satellite imagery for civil applications and in support of homeland security efforts stalled out because of objections raised over privacy, civil rights and civil liberties issues. In 2007, Congress ordered DHS not to begin operations, and last June, Homeland Security Secretary Janet Napolitano announced that the program will be shut down. The announcement coincided with California Rep. Jane Harman introducing legislation "to shut down the NAO - period."

The House Committee on Homeland Security held a hearing on the NAO on September 6, 2007 that was adversarily titled, "Turning Spy Satellites on the Homeland: the Privacy and Civil Liberties Implications of the National Applications Office.” There was nearly unanimous concern expressed by the lawmakers on the committee over perceived privacy issues and over who would be in charge of making sure privacy laws were followed.

A federal court ruling last Friday on other CIA documents Trentadue had long been seeking complete disclosure of shed further light on the level of cooperation that went on between the Intelligence Community and investigators of the bombing, for which Timothy McVeigh and Terry Nichols were convicted. US District Court Judge Clark Waddoups ruled on a FOIA lawsuit Trentadue brought against the CIA for the CIA's refusal to completely declassify records it acknowledged it possesses pertaining to Trentadue’s original request for documents on the bombing, “including any [related to] potential involvement of foreign nationals in that attack.”

Waddoups’ ruling stemmed from Trentadue’s suit seeking federal court adjudication of disclosure of some of the 52 separate CIA documents that the CIA had earlier described in what’s called a “Vaughn Index” that briefly describes withheld documents under the FOIA and the specific reasons for doing so.

Pursuant to FOIA case law, a Vaughn Index must: (1) identify each document withheld; (2) state the statutory exemption claimed; and (3) explain how disclosure would damage the interests protected by the claimed exemption. This detailed affidavit permits courts to effectively and efficiently evaluate the factual nature of disputed information.

The disclosures about the 12 CIA documents contained in Waddoups’ ruling last Friday had been thought to be the first indication that the CIA and the Department of Justice (DOJ) worked together in the bombing investigations and prosecutions, but it was clear from the Vaughn Index prepared by the CIA on its classified materials pertaining to the bombing that the CIA assisted in the investigation.

Furthermore, the May 1995 CTC memo declassified in 2005 made clear that “in its efforts to support the investigation, [the CIA’s] CTC coordinated closely with FBI and kept in touch with other law enforcement agencies as the case developed.”

The memo provides insight into the types of assistance the CIA provides to domestic terrorism cases.

As part of the CIA’s involvement in the Oklahoma City bombing probe, according to the declassified memo, the CTC placed an “officer at the FBI’s operations center” and “set up an Agency-wide task force to focus foreign intelligence resources on the Oklahoma City case,” which included “CTC searching its data archives for members of any Islamic extremist or terrorist groups known to have spent time in Oklahoma City.”

In an apparent response to that “data archives” search, the CIA referred a “secret” April 20, 1995 “DOD HUMINT system intelligence information special report” on two “possible active Iranian militants in Oklahoma” in its files that originated with the Air Force Office of Special Investigations (AFOSI).

Nearly two-and-a-half pages of the three-page document though were redacted by AFOSI Chief, Information Release Branch, Anne Costa, who determined that the majority of the withheld information pertained to “national security information concerning the national defense or foreign policy that has been properly classified in accordance with substantive and procedural requirements of a presidential executive order (currently Executive Order 13292 …)”

The unredacted portions of the intelligence report contained only descriptions of the two Iranians, “as recalled from 1987” by unnamed sources.

The intelligence report originated with an AFOSI detachment at the now closed RAF Uxbridge air base in the London Borough of Hillingdon. The report was sent to the CIA’s Counterterrorist Center, the Joint Chiefs of Staff, Defense Intelligence Agency, director of the FBI, and Air Force bases in Ramstein, Germany and Washington DC.

The DIA Directorate for Intelligence Operations is responsible for centralized direction and management of the DOD HUMINT System.