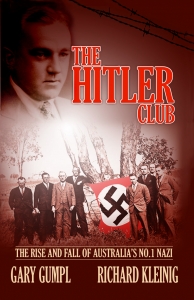 THE life of a former South Australian MP's father and his links with the German Nazi Party during the 1930s has been detailed in a book written by local magistrates Gary Gumpl and Richard Kleinig. THE HITLER CLUB, to be released next month, is the story of Dr Johannes Heinrich Becker - father of former state politician Heini - and other members of the former Nazi Party in SA.

Before World War II, a photograph was taken by the side of a road in the Barossa Valley, depicting eight men standing around a tree draped in a Nazi flag. Dr Becker is believed to have taken the photo.

The group became known as "The Hitler Club" and Dr Becker was known as "Australia's No. 1 Nazi".

The book follows the misguided witch-hunt that incarcerated, persecuted and deported them and many others.

"It is a story of immigration, of an Australia in formation, of the complexity of loyalties and the juggling of the old and new," the book's synopsis on the Pan Macmillan website states.

"But most of all, in the hands of two South Australian magistrates, it is a story of injustice that must never be allowed to be forgotten."

In the 1930s, Dr Becker - who migrated to Australia in 1927 - attracted the attention of the public and Australia's security services through his association with Hitler's National Socialist German Workers' Party.

He joined the Nazi Party on March 1, 1932, and later became state leader for the South Pacific and head of the Tanunda branch.

Following the outbreak of World War II, Dr Becker was jailed at Loveday in SA and Tatura in Victoria.

After being paroled in 1946, he made headlines in November, 1947, when he was discovered as a stowaway on a ship lying off Watson's Bay, Sydney, bound for Panama.

Next month he was deported to West Germany where his exoneration in December, 1948, was assisted by the disappearance of a dossier on his Australian activities.

Despite repeated appeals, he was never allowed to re-enter Australia. He died in West Germany on February 21, 1961.

Having practised at Tanunda in the Barossa Valley, Dr Becker applied for naturalisation in 1930 but lacked the necessary five years residence to qualify.

Because of his German credentials, he was never registered as a medical practitioner in Australia, yet he worked as a doctor until 1939, which involved him in a continuing struggle with the local branch of the British Medical Association. He was backed by his patients and then SA premier Sir Richard Layton Butler.

During the dispute, Dr Becker won two libel cases, as well as the admiration of many German-Australians.

"While often considered charming and diplomatic, he could also be intolerant, imperious and forthright in expressing his extreme views," the Australian Dictionary of Biography Online Edition states.