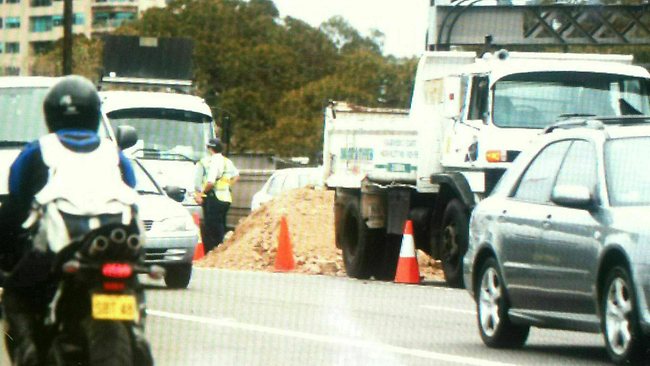 A SYDNEY driver has been arrested after dumping a load of dirt from a truck on the Sydney Harbour bridge to protest against fascism.

Witnesses said the driver was arrested by police at the scene.

Witnesses said the driver stopped in Lane 2, just beyond the southern toll booths at Millers Point on the city side of the bridge.

He dumped the six tonnes of dirt and it spilt across most of the four lanes. He then erected as many as six hand written cardboard signs saying “Down with Fascist Australia”.

Police then arrived on the scene and shovelled the dirt from lane 1. A bobcat was brought in to remove the six tonnes of soil and rock. The bridge is now open but traffic queues extend back on the Western Distributor to the Anzac Bridge and on the Cahill Expressway to the Eastern Distributor.

The truck driver was arrested at the scene and taken to North Sydney Police Station for questioning. Motorists heading north this afternoon are urged to avoid the area or delay their travel.

Anyone who witnessed the incident is urged to contact The Rocks Police Station via Crime Stoppers on 1800 333 000.