" ... Despite speculation over his involvement, Devlin said he played no role in Lumumba's death [editor's note: send inquiries on direct US involvement to Frank Carlucci and Vernon Walters ... - Helpful AC], though he get the order from Washington to carry out the assassination. ... "

KINSHASA, June 7 (Reuters) - The CIA's top agent in Congo had been in Kinshasa just three months when he was asked to back a coup that launched the newly independent state into decades of war, dictatorship and chaos.

"He turned to me and said, 'But we will do this only if the United States government will recognise the temporary government which will be put in power'," Devlin told Reuters by telephone from his home in Virginia.

"Although I had no authority to make such an agreement, I finally just said yes," said the former CIA officer, who two months ago published his memoirs of his seven-year posting in the Democratic Republic of Congo.

The coup, months after Congo won independence from Belgium, went ahead. Lumumba, suspicious to Washington for his close ties to Moscow, was placed under house arrest and later murdered.

Mobutu, later to become Mobutu Sese Seko, consolidated power in a second coup five years later and went on to build a regime characterised by theft and corruption on an unprecedented scale.

The vast central African country, long known under Mobutu as Zaire, would not hold democratic polls again for another 46 years, and only after a 1998-2003 war killed an estimated four million people.

"Chief of Station, Congo", his account of his stint in Kinshasa, then called Leopoldville, is an effort to finally set the record straight following years of rumours and accusations.

"NO HAND IN ASSASSINATION"

Despite speculation over his involvement, Devlin said he played no role in Lumumba's death, though he get the order from Washington to carry out the assassination.

"I did receive instructions," he said. "I was told I was to act in this way on the instructions of the president of the United States."

Lumumba by then had been deposed as prime minister, but the U.S. feared his continued political influence. Devlin said he decided not to follow the order and instead stalled for time.

"I felt this would eventually be settled by the Congolese themselves. And it was, with the help of the Belgians."

In January 1961, Lumumba escaped from house arrest only to be recaptured, beaten, and murdered by soldiers under Mobutu's command with the assistance of Belgian officers.

Following historic elections last year that were meant to draw a line under the kleptocracy of the Mobutu years and the devastating conflict that grew out of the void he left, many now hope Congo will turn the page on its troubled past.

Devlin is not so optimistic.

The new prime minister, Antoine Gizenga, 81, was Lumumba's deputy in 1960 and is described by Devlin as "a man of very limited capacity". He criticised President Joseph Kabila, 36, who won elections last year, as "very young and inexperienced".

Congo is less developed today than at independence, with few paved roads, no electricity in the interior, and an economy in ruins. But Devlin rejects suggestions U.S. meddling is to blame [sic]. ...

FOR ANOTHER PERSPECTIVE ON THE CIA'S MR. DEVLIN AND THE LUMUMBA MURDER, SEE ... 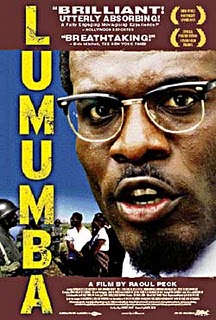 The evil that men do lives after them… But for Larry Devlin, the CIA’s chief of station in DRCongo for much of the first two decades of independence, “the evil” that he and his colleagues and superiors at the CIA headquarters and in various American governments wrought on Congo appears to live not after him but with him right now.

Larry Devlin was the CIA chief of station in DRCongo in 1960 when the American president, Dwight D. Eisenhower, authorised the assassination of the Congolese prime minister, Patrice Lumumba, by lethal poisoning. Devlin was given the job to kill Lumumba, but his conscience so smote him that he kept the poisons for so long that the job was taken from him and given to someone else. In his memoirs published this month, Devlin unwittingly exposes how the imperial powers run Africa by remote control. This is one book every African must read. Osei Boateng reports.

The evil that men do lives after them… But for Larry Devlin, the CIA’s chief of station in DRCongo for much of the first two decades of independence, “the evil” that he and his colleagues and superiors at the CIA headquarters and in various American governments wrought on Congo appears to live not after him but with him right now.

Devlin now lives in France, and from his own account (recounted in his new book, Chief of Station, Congo – Fighting the Cold War in a Hot Zone published this month), he appears to carry a load of guilt for what the Americans did in the early 1960s in truncating the progress of what is arguably Africa’s richest country (natural resource wise).

But, not surprisingly, Devlin tries to expiate the guilt by finding refuge in the Cold War. “We removed [Prime Minister Patrice] Lumumba from power because the Soviet Union wanted to use him and Congo as a bridge to other African countries” is his favourite refrain throughout the book. But this excuse does him no credit as anybody with the most tenuous grasp of history knows that Congo was not the first African country to gain independence, or the first to be ruled by a “radical” prime minister friendly to Moscow.