The Greenbrier A Five-Star Fallout Shelter (Part One) 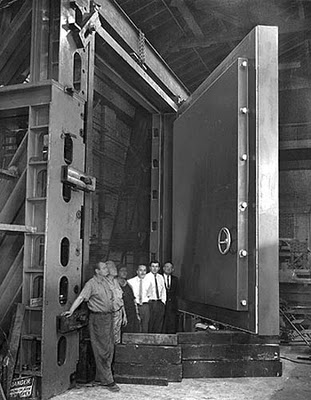 Note from Michelle: "I saw your post: re CSX .... I was at 'THE GREENBRIER' in White Sulphur Springs. My great uncle worked on 'THE CAVE' there and all the workers were warned to keep it 'top secret.' It's a hideout for Congress and is now open to the public.

"CSX railroad owns 'THE GREENBRIER' and it's where the railroad boys, executives and the filthy rich conservatives gather.... They golf, dine, and have meetings. Vendors pay the bills in many instances. The wives are arranged with little baths ans massages. In my case: Okonite and Harmon Industries, and PJ Sales... were picking up tabs.

"Sam Snead was their golf pro, and I met him in person.

"It had a 3 ft thick entry door, solid steel, went up like at an old castle; asphalt entrance, paved, incline to the bunker/shower area.... huge furnaces.... 'For the cold, nuclear winters.'"

"I thought, 'This looks more like a gas chamber.' The lady guide said the congress people would 'Strip down and go straight to the showers' to wash off the nuclear fallout.... Then you just walked on through to the grand hotel and it's fancy bars and restaurants....

"This is the ticket from my golf bag, attached... you can use it if you like..

Atomic tourist attractions, radioactive and otherwise, can be found all over the world, but here in the U.S. the landscape is literally pocked with them. Indeed, if John Q. Public was atomically inclined, he could load up the SUV and take the family on a two-month summer vacation and STILL not see everything that's out there. CONELRAD, through links and our own first person accounts, will attempt to cover all your sightseeing needs. The following article about the decommissioned government fallout shelter underneath the Greenbrier Hotel is our inaugural travelogue.

In the summer of 1992 the Washington Post revealed the existence the immense government shelter you are about to read about. The nation yawned. The Cold War had been over for about a year and America was on to new diversions. Thus the news of this ridiculous and fascinating tax sinkhole left over from the fifties took a back seat to L.A. riots and a cantankerous Texas billionaire. Anxious Atomic tourists would have to cool their heels for a few years before the Greenbrier Hotel management bowed to nascent Cold War nostalgia and opened their blast doors to the public. (The bunker is also available for group events and "unique theme parties.") But as anyone who has taken the tour will tell you, it was well worth the wait.

Project X, then Project Casper and finally Project Greek Island were the original codenames for the shelter. Its SOLE intended occupant was always the Congress of the United States and their aides. To mangle the familiar Titanic slogan: WOMEN AND CHILDREN...NOT ADMITTED. There are emergency relocation sites for the other branches of government such as Mount Weather in Northern Virginia and Site R (near Camp David, MD) which still remain operational.

In an extraordinary bit of government back scratching the Eisenhower Administration, via the Architect of the Capitol, negotiated to build the structure on the grounds of the Greenbrier Hotel; a five star resort located five hours south of Washington in White Sulphur Springs, W. VA. In exchange for government financing of the Greenbrier's West Virginia Wing addition, the hotel permitted the simultaneous construction of the shelter beneath it. This provided the initial cover story for the digging of the congressional hideaway. Ground was broken in 1957 and the Greenbrier employee newsletter noted the occasion by "informing" staff that "testing" was being conducted for the new wing.

Serendipitously, the bunker and the West Virginia Wing of the Greebrier were completed just in time for the Cuban missile crisis of October 1962. This remained the only occasion the shelter ever went on full alert. As the Cold War played out over the decades, Project Greek Island was quietly maintained and updated by the Army Signal Corps and sworn-to-secrecy Greenbrier staff. Incredibly, the government employees posed as on-site TV repairmen and had orders to blend in with the townsfolk. No matter how patriotic these government employees were, serving their country by posing as TV repairmen in White Sulphur Springs, W. VA must have been the Cold War equivalent to directing traffic or walking a third shift sentry beat.

The bunker managed to outlast the Soviet Union by a margin of about a year. And if it weren't for that Washington Post expose, it would probably still be up and running. As things turned out, shortly after that article was published, Project Greek Island was decommissioned. In 1995 the first tours of the bunker began exclusively for Greenbrier guests. Beginning in 1997 anyone with 25 bucks could get a guided tour twice a week.

My stroll through the "former government relocation facility" is one of the strangest "educational" experiences of my life. The left over propaganda posters (which are now "exhibits") warning staff never to divulge their mission is the creepiest reminder that the public was never intended to see the inside of the shelter. The public, of course, was supposed to remain blissfully ignorant of any such government contingency plans. The size, weirdness and relative extravagance of the Greenbrier bunker make it—hands down—the "Graceland" of Atomic Tourism. Though there is no "Jungle Room," per se, you do get to see exactly where Newt Gingrich would have slept through Armageddon. In other words, every tour of the Greenbrier is strictly Platinum.