The Gates Appointment Obama Slaps Antiwar Voters in the Face 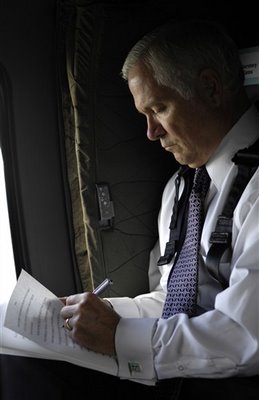 The agreement by Defense Secretary Robert Gates to remain at the Pentagon under the incoming Democratic administration—widely reported in the US media over the past 24 hours—is the starkest and most brazen rebuff given by President-elect Barack Obama to the tens of millions who voted for him based on the false promise that he would bring “change” to Washington.

George W. Bush appointed Gates to head the Pentagon in November 2006, two years ago, following the Republican debacle in the congressional elections and the resignation of Donald Rumsfeld. While millions voted for the Democrats in 2006 in an effort to compel an end to the war in Iraq, the Bush administration went in the opposite direction, escalating the US military intervention through the “surge” of an additional 30,000 combat troops. (The congressional Democrats dutifully went along, appropriating the funds required to pay for the surge and confirming Gates, General David W. Petraeus and other top officials).

Gates played a key role in these events—the appointment of Petraeus as chief US commander in Iraq, the bloody fighting of the spring and summer of 2007, with the highest US casualties of the war, the enormous increase in aerial bombardment, with a shattering effect on Iraqi society, and the combination of bribery and repression that split both the Sunni and Shi’ite opposition to the US occupation regime.

Obama won the Democratic presidential nomination over Senator Hillary Clinton in large measure because he appealed to the same antiwar sentiments that had propelled the Democrats to their victory in the 2006 congressional elections. His mantra throughout the primary campaign—a rebuke to Clinton and other rival Democratic candidates who had voted for war in the Senate—was that he would end the war in Iraq, “a war that should never have been authorized and never been fought.”

Now, with the retention of Gates at the Pentagon, and the widely reported offer of the State Department to Clinton—as well as the selection of a slew of pro-war figures for lesser national security positions—Obama is reassuring the military, the intelligence agencies and the ruling elite as a whole that he will be firmly committed to the defense of US imperialism, including clinging to every inch of territory and every drop of oil secured by the Bush administration’s criminal aggression in Iraq and Afghanistan.

It was widely noted in the US media that Gates is the first Pentagon chief in US history to be retained after a change of party in the White House. That Obama is sending a signal of his future policy was acknowledged both by media outlets generally supportive of the Bush administration’s policy in Iraq and those more critical.

The Wall Street Journal called the decision “the clearest indication to date of the incoming administration’s thinking about Iraq and Afghanistan. The defense secretary has opposed a firm timetable for withdrawing American forces from Iraq, so his appointment could mean that Mr. Obama was further moving away from his campaign promise to remove most combat troops from Iraq by mid-2010. The two men largely see eye-to-eye on Afghanistan, which will be the new administration’s main national-security priority.”

The New York Times suggested that “Mr. Gates will now have to pivot from serving the commander in chief who started the Iraq war to serving one who has promised to end it.” But the newspaper acknowledged that it was Obama rather than Gates who was shifting gears. “In deciding to ask Mr. Gates to stay, Mr. Obama put aside concerns that he would send a jarring signal after a political campaign in which he made opposition to the war his signature issue in the early days.”

There have been attempts by Obama’s apologists in liberal quarters such as The Nation to claim that Obama himself will set the policy, including a gradual pullout from Iraq, and that he has only assembled a hawkish lineup of appointees to forestall right-wing criticism of his foreign policy. This begs the question, of course, of why figures such as Gates, Clinton and retired General James Jones, tipped for national security adviser, would agree to play a role in such a charade. An even better question would be: what assurances has Obama made to Gates about the future course of the wars in Iraq and Afghanistan, to obtain his agreement to continue in office?

More than a million people have been killed in the bloodbath unleashed by the 2003 US invasion of Iraq. Five million have been displaced from their homes. Iraq has been destroyed as a functioning society. Afghanistan is already in ruins after 30 years of US-instigated warfare, and Pakistan is well on its way to becoming the next battlefield in the region.

In the eyes of most of the world’s population, and millions of Americans, Gates deserves a prominent place in the dock at a future war crimes tribunal, alongside Bush, Cheney, Rumsfeld, Rice, Colin Powell, and others responsible for the greatest act of mass murder in the twenty-first century. In retaining Gates, and thereby embracing the policies of occupation and semi-colonial domination with which he is associated, Obama is dropping any antiwar pretense and emerging openly as the newest commander-in-chief of American imperialism.