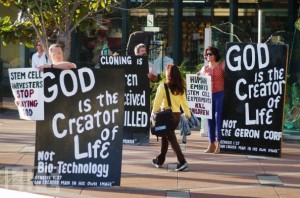 Prentice is Senior Fellow for Life Sciences on the Family Research Council (FRC), a right-wing religious lobbying group, founded and funded by the family of Erik Prince.

"...the Family Research Council promotes the Judeo-Christian worldview as the basis for a just, free, and stable society."

Erik's father, Edgar Prince, financially began the Family Research Council, including construction of its six-story building in Washington DC. Others led it: evangelist James Dobson of Focus on the Family, and conservative icon Gary Bauer; but Prince donated the money to make it happen. As Bauer said in a eulogy for the elder Prince, "...without Ed and Elsa and their wonderful children, there simply would not be a Family Research Council."

Erik's sister Betsy famously said "...my family is the largest single contributor of soft money to the national Republican party..." Married to Dick DeVos, of the Amway fortune, she is an active funder of conservative causes, including such gifts as, according to Salon:

Focus on the Family is currently in the news for funding the $4 million Tim Tebow anti-abortion commercial in this year's Super Bowl. A branch of that organization also sued unsuccessfully to shut down the California stem cell research program.

And David Prentice, full-time employee of the Family Research Council?

With the possible exception of the Pope, no non-governmental individual has had such an impact on Republican stem cell research policy.

"...Karl Rove, head of the White House's Office of Political Affairs, has declared that embryonic stem cells aren't required because there is "far more promise from adult stem cells."...It seems that the White House received this idea from David Prentice, a senior fellow for life sciences at the Family Research Council and an adviser to Republican members of Congress. In a report of the Presidents Council on Bioethics, Prentice claimed that adult stem cells can effectively treat more than 65 diseases. (emphasis added-dr) Not only is this assertion patently false, but the information purveyed on the Family Research Council's website is pure hokum," wrote Robert Schwartz in the New England Journal of Medicine in 2006.

Prentice's views may be popular in certain ultra-conservative ideological circles, but they are far from mainstream science.

Example: The Stem Cell Research Enhancement Act (HR 8, Castle/DeGette) would have legalized the funding of new embryonic stem cell lines, made from blastocysts otherwise scheduled to be thrown away. Prentice opposes such research, calling the microscopic joinings of sperm and egg "young human life", and the research "immoral". His position was echoed by seventeen ideological groups, publicly opposing HR 8. And on the other side, in favor of expanding the research? Five hundred ninety-one patient advocate, science, and medical groups -- not to mention strong majorities in both House and Senate.

"...adult stem cell treatments fully tested in all required phases of clinical trials and approved by the U.S. Food and Drug Administration are available to treat only nine of the conditions on the Prentice list, not 65....By promoting the falsehood that adult stem cell treatments are already in general use for 65 diseases and injuries, Prentice and those who repeat his claims...cruelly deceive patients."

Restrict cure research to adult stem cells only? According to Peter Donovan, Director of the Sue and Bill Gross Stem Cell Research Center, "It's like someone in the early 1900's saying, "Why develop the motor car, when we already have the bicycle... Patients deserve more, a lot more."

Or Dr. Sean Morrison, Director of the University of Michigan Center for Stem Cell Biology: "David Prentice has been one of the most prolific sources of misinformation on stem cell research. I don't know any leading stem cell biologists who agree with the claims he has made."

With a pro-research president in office, and majority support in both houses of Congress, it might seem that Dr. Prentice has become irrelevant.

Unfortunately, this is not the case. Prentice and his list provide scientific-sounding justification for those who oppose the research at a time when it is desperately needed.

In 2008 America spent an estimated $2.3 trillion dollars on health care costs -- roughly equivalent to all federal income tax receipts combined. Seventy-five percent of that mountain of money went to the care of those with chronic (incurable) conditions. We must research ways to heal our loved ones, not just maintain their expensive misery. Embryonic as well as adult stem cell research should be fully explored.

Unfortunately, only seven states actively fund embryonic stem cell research -- and more than a dozen are considering legislation which could criminalize it altogether.

According to Catholic News Agency, "David Prentice, Ph.D., who now works fulltime with FRC...estimates that the exact number of conditions that can be successfully treated by adult stem cells 'is growing weekly. It's over 70, and soon it will be 80'."

Will Prentice's narrow view prevail? According to Dr. Alan Trounson, President of the California Institute for Regenerative Medicine, "The enemy is the disease or injury that is destroying our friends and families' quality of life, and that is what we must defeat. The mission is to bring the benefits of pluripotential and progenitor cell therapy to regenerative medicine. That is what we are doing, and neither Dr. Prentice nor any other critic shall deter us from fulfilling this vision".