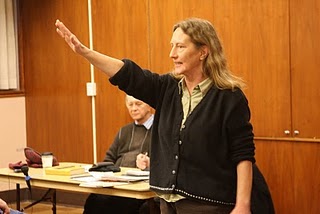 EUGENE, Ore. (AP) — The students stomped their feet, heckled and then stood and turned their backs as the speaker at the University of Oregon defended red-baiting Sen. Joseph McCarthy and called Martin Luther King Jr. a communist dupe.

With more than 30 security officers assigned to keep the peace, the 90-something patriarch of the group sat in a wheelchair next to the speaker, silently observing the spectacle while at times half-asleep.

A campus with a reputation for young, leftist radicals has been roiled in protest in recent weeks as the aging collection of extremists — deemed a hate group by those who track the issue — has intensified its message, including a Hitler salute at an event in December.

Some students say their speech has made the university a dangerous place and want them banned from campus. Administrators now find themselves trapped between the ideal of tolerance and the right to free speech, searching for a way to have both.

Charles Martinez, the university’s vice president for institutional equity and diversity, said administrators have been meeting to decide whether to change school policy on the use of space by outside groups. “They haven’t been easy discussions,” he said. “They shouldn’t be easy.”

Pacifica Forum was founded more than 15 years ago by Orval Etter, a 94-year-old retired professor and self-described “Quaker at heart” who resides in an assisted-living facility.

According to its Web site, the forum’s mission is to “provide information and perspective on the issues of war and peace, militarism and pacifism, violence and non-violence.” The group includes a furious anti-communist, a kilt-wearing Nazi sympathizer and perhaps not a single person born later than 1960.

The group met off campus for years until, according to Etter, Jewish groups unhappy with what they considered an anti-Israel slant pressured a local church to drop them. Etter then took advantage of a university policy in which retired faculty can book rooms on campus for free.

Pacifica has fewer than 10 core members and no firm rules for deciding who delivers a free lecture. “The forum has been, in a quite genuine way, an expression of free speech,” Etter said.

Many topics have been tackled, but the group has gained attention for hosting speakers who question the Holocaust. In 2008, for example, Pacifica invited David Irving, who served time in an Austrian prison for violating the country’s law against denying the Nazis exterminated 6 million Jews during War World II.

Paul Bessemer, director of Hillel, a campus Jewish organization, has monitored Pacifica for years. He said Pacifica members have long had sympathy for the Palestinian cause, but the current batch has taken it in a darker direction.

“It’s got a much nastier tone than it used to,” Bessemer said. “Those people that were really pro-Palestinian, anti-Israel — on the principal that Israel doesn’t have a right to exist — have left over the anti-Semitism.”

Since the Hitler salute at a Pacifica presentation in December, scores of protesters — some silent, some not — have attended meetings once largely ignored. Mercedes White Calf, a junior, said she initially thought Pacifica should remain on campus as a free speech issue. She now believes the hostility is creating a dangerous situation and the group must go.

The tension escalated last week when someone spray-painted a 4-foot-by-4-foot swastika in the office of the Lesbian Gay Bisexual Trans Queer Alliance. Though no Pacifica members are suspected, one of its January lectures focused on the symbolism of the swastika.

April-Kay Williams said the vandalism prompted her decision to leave the university. “It may be common to you but I’ve never experienced hate like this before,” Williams said in an e-mail. She added: “I do not want to be on a campus where the president talks about diversity and inclusiveness but still allows a hate group on campus.”

Roughly 100 students rallied Friday before Pacifica’s most recent gathering. Holding signs such as “Pacifica Forum Nazi Dupes,” and “Smash Fascism,” the students urged the group to leave campus — voluntarily or by university edict.

The students marched to the edge of campus, where Valdas Anelauskas, a Lithuanian immigrant and racial separatist, lectured for more than hour, partly on the role of Jews in the Bolshevik Revolution. Protesters regularly challenged him.