Related: "Former Washington Times Ed who Resigned amid Accusations of Racism, Sexism, Supporting Eugenics, etc. now Works for POLLSTER SCOTT RASMUSSEN" Washington Post: " ... Rasmussen said he is simply a 'scorekeeper,' but his spike in clout has sharpened skepticism about how he tracks the dip in Democratic fortunes. Frustrated liberals suspect sorcery. Markos Moulitsas, the creator of the Daily Kos blog, has accused the pollster of 'setting the narrative that Democrats are doomed' with numbers that fuel hours of Republican-boosting on talk radio and cable. The old guard of the polling industry charges that Rasmussen merely makes educated guesses, like a market-savvy contestant on a political 'The Price Is Right,' and considers him a threat to the standards of an industry already facing existential challenges. Those traditional peers fear Rasmussen's rise signals the fall of the in-depth probing that politicians, policymakers and reporters have turned to for more than half a century. ... "

NOTES ON THE HISTORY OF SCOTT AND WILLIAM RASMUSSEN

THE FOUNDING OF ESPN 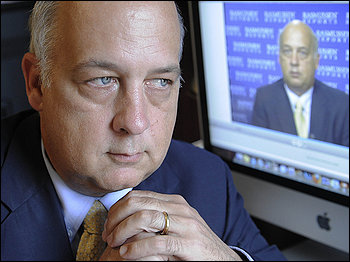 1979 – Getty Oil bought 85% of the business when the fledgling company needed a large influx of cash and moved the Rasmussens out of control. -- Source: Hartford Courant, Page 1 article, Sept, 25, 1981.

1980 – By year-end, there were about 115 employees in the business established in Avon, CN.

August 1981 – The Rasmussens informed employees that ERN had not been paying its group health insurance premiums. Staff went without pay until Aug 27, when a complaint was made to the U.S. Labor Dept.

August 1983 – NCAA News wrote that the Rasmussens were selling their remaining interest in ESPN. “The Rasmussens will reputedly use the sale to help cover nearly $300,000 owed to 79 former employees of their defunct Enterprise Radio Network” the story said. “A West Hartford, Connecticut, superior court has delayed until November Scott Rasmussen’s trial on 79 counts of failure to pay wages.” --Source: The NCAA News, Aug. 17, 1983  1983 – November 28, the Rasmussens agreed in court to pay $130,000 to the 79 employees, “less than half the $269,000 sought by the workers,” UPI reported. In apparent contradiction to the NCAA News story, the Rasmussens’ attorney, Richard C. Robinson, was quoted as saying the payback would not involve the sale of ESPN stock. Several civil suits were said to be still pending against William and Scott Rasmussen. --Source: UPI wire story, published Nov. 30, 1983 in the Syracuse Herald-Journal

1986 –After graduating from DePauw University, Scott Rasmussen began to be mentioned in newspapers for his political activities, in the Charlotte, NC area.

1987 –In a Jan. 20, 1987 article, the Charlotte Observer identified him as head of the League of Concerned Americans, a group promoting a plan to “change the way the U.S. government spends money.”

1994 – In articles published in the Observer, he was said to be the head of an organization working to impose term limits on elected officials, which was also part of the Republican national agenda at that time.

2003-2004 - As a campaign consultant, Rasmussen received $95,500 from the Republican National Committee and another $45,500 from the George W. Bush campaign. --Source: Center for Public Integrity website.

BUSINESS AFFAIRS IN THE 1990s

1992 –Scott Rasmussen announced that he was starting Universal Imaging, a brain-mapping company to be based on the use of a machine that would analyze electrical discharges in the brain to help diagnose depression, dementia, alcoholism, learning disorders, head injury or schizophrenia. One of his investors reportedly was a local real estate investor who had met Rasmussen through church. The proposal drew skeptical comment from the Charlotte-area medical community. --Source: Nov. 23, 1992 article in Business Journal of North Carolina.

1999 –Maricopa Research, renamed Rasmussen Research, was sold to a British firm, TownPagesNet.com. The British company soon came to regret the acquisition of this American subsidiary. In a 2001 SEC filing, the company said that Rasmussen Research, which had been renamed Research Sales, Inc., d/b/a Rasmussen Research, “has been unable to develop the strategic relationships management believes are necessary to operate the business successfully” and that it “has not generated the level of revenue we had expected when we purchased the company.” -- Source: Annual Report (Form 20-F) filed with the Securities and Exchange Commission by TownPagesNet.com.

Scott Rasmussen soon emerged as the head of a new company, Rasmussen Reports, which also does online polls and surveys. This company, which has acquired wide visibility on television and the Internet, continues to operate, listing as its address a post office box in Ocean Grove, NJ.

Around this same time, David Mobley and William Rasmussen, both now living in Naples, Florida, had launched business ventures of their own, which eventually got them both charged with felony crimes. In October of 1996, they and others unveiled a plan to build an ambitious, first-of-its-kind, $100-million golf spectator area, which they called Stadium Naples.

By 2000, this project had been found to involve corrupt payoffs to public officials and the loss, through fraud and deception, of millions of dollars to investors. Nine defendants eventually pleaded guilty.

In February of 2000, David Mobley, who had helped Scott Rasmussen launch his North Carolina research company, confessed to SEC investigators that his hedge fund had been cheating its investors. He was sentenced to 17 years in federal prison on Oct. 29, 2001. Various Collier County public officials and business associates of William Rasmussen were also sentenced in connection with Stadium Naples.

William Rasmussen was arrested on Oct. 11, 2001. He was later charged with four felony counts. He received a sentence of two years probation in exchange for promising to testify against one of the county commissioners implicated in the political corruption case. -- Sources: various articles in the Naples Daily News, especially those published on Feb. 27, 2000 and Jan. 4, 2004. Business Wire article, Oct. 25, 1999. Securities and Exchange Commission Form 6-K filing, Jan. 27, 2000.

2004 – William Rasmussen filed a libel suit against the Naples Daily News over various articles, including editorials, declaring that Rasmussen had been “at the center” of the Stadium Naples corruption, that he had “jilted” charities and vendors and told “lies to pitchmen” selling investments in Stadium Naples. Rasmussen “left everything in his path in shambles—county government, charities and investors,” the paper had written.

Several years ago Scott Rasmussen returned to Ocean Grove, where his family had roots.

2005 -- In an upset election, Rasmussen became president of the Board of Trustees of the Ocean Grove Camp Meeting Association.

August 13, 2007 – The Alliance Defense Fund filed a federal lawsuit against the State of New Jersey on behalf of the Ocean Grove Camp Meeting Association, challenging the State’s law against discrimination. The ADF was founded in 1994 by 35 religious conservatives, including James Dobson of Focus on the Family. According to the website, the ADF was primarily concerned with “the dramatic loss of America’s courts and the resulting challenges to people of faith to live and proclaim the Gospel.” Through court challenges such as the one involving civil unions in Ocean Grove, the ADF strives to carry out its three-pronged mission: “guarding the sanctity of human life,” “protecting traditional family values” and “defending religious freedom.”

“SourceWatch,” a project of the Center for Media and Democracy, says that ADF was a response from the religious right to the American Civil Liberties Union. -- Sources: Ocean Grove Camp Meeting Association - Press Release, August 13, 2007 . alliancedefensefund.org, sourcewatch.org.

September 15, 2007 – Commissioner Lisa Jackson of the NJ Department of Environmental Protection denied a longstanding tax exemption for the pavilion under its Green Acres Program. U.S. Rep. Frank Pallone Jr. has said that other public funds, including federal aid for future storm damage to the beach and boardwalk, were also at risk because of the Camp Meeting’s exclusionary policy. Such an outcome would adversely affect not just the Camp Meeting but the entire community of Ocean Grove. -- Sources: Asbury Park Press, page-one article, 8-31-2007. Asbury Park Press, 9-18-2007. Speech by U.S. Rep. Frank Pallone at Aug. 25 legislators’ breakfast meeting of the Ocean Grove Homeowners Association

Under Rasmussen’s leadership, the Camp Meeting Association seems to be tacking to the right in other ways. During the spring of 2007 Scott Rasmussen reportedly met with an out-of-state organization called the Willow Creek Association, an arm of the Willow Creek Community Church, a fundamentalist mega church located in a wealthy Chicago suburb. The association’s stated purpose, according to its Website, is to involve itself with Christian congregations throughout the country in order “to innovate, take risks, try new things, follow the fresh winds of the Spirit wherever they may lead and toward whatever new patterns of church life that may represent.” Rasmussen was commended by this group, on its Website, as someone who “is currently introducing change” into the Camp Meeting.

Rasmussen and his allies in the Camp Meeting have since been promoting this organization. In August, 2007, the Camp Meeting’s Youth Temple hosted a Willow Creek satellite broadcast of its annual Leadership Summit, and is scheduled to do so again in 2008. -- Source: Willow Creek Association website: http://www.willowcreek.com/. The Ocean Grover, spring/summer 2007, p, 5, p. 11.

Real America: The CEO of Target and Institutions of the Anti-Gay Christian Right

The Mormon Order of Dull Knives Meets the YMCA: The Leadership of the LDS Church Lurking Behind the Promotion of California’s Prop 8

Down and Out: Don Wildmon Retires from the American Family Association