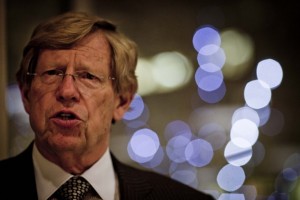 David and Charles Koch have thrown another punch in their ongoing fight against The Cato Institute, the Washington, D.C.-based libertarian think tank that they helped found. On Monday, the billionaire brothers filed a second suit in state court in Kansas against Cato, challenging its appointment of four new board members.

Also on Monday, Theodore Olson—the Gibson Dunn & Crutcher partner who's both a Cato board member and Koch Industries' outside counsel— filed an affidavit in support of the suit. And while Stinson Morrison, which filed the Kochs' first suit against Cato, is also working on the second suit, the brothers have also retained Williams & Connolly.

The skirmish between the Kochs and Cato began in early March when the brothers filed a lawsuit in state court in Kansas claiming that they should have the option to buy the shares that belonged to the nonprofit's former chairman, William Niskanen. Niskanen died in October at age 78. At the time of his death, Niskanen owned 25 percent of Cato and the Kochs owned 50 percent, according to the brothers' first complaint.

The Koch brothers, who are the principals of conglomerate Koch Industries as well as major Republican Party donors, claim that the shareholders agreement requires that Kathryn Washburn, Niskanen's widow and a named defendant, offer her late husband's shares to the Institute. If the Institute declined to buy Niskanen's shares, the remaining shareholders—the Koch brothers, and Cato president and director Edward Crane III—would have the option to purchase them, according to the complaint.

In a statement last month, Crane, who was also named as a defendant, called the first suit a "hostile takeover" and an attempt by Charles Koch "to transform Cato from an independent, nonpartisan research organization into a political entity that might better support his partisan agenda." Crane said Cato would fight the suit vehemently "in order to continue as an independent research organization, advocating for individual liberty, limited government, free markets and peace."

In their second suit (filed in the same Kansas court), the Koch brothers accuse Crane, Cato board chairman Robert Levy, and seven other board members of improperly adding four directors to Cato's board, which effectively diluted the Kochs' voting power. At a special board meeting on March 22, the board voted 9-7 to pass bylaw resolutions which created four new director positions, and then filled them. (The suit also names the four new directors as defendants.) The Kochs seek to invalidate the election of the new directors on the basis that it "was irreparably tainted by breaches of the fiduciary duties of loyalty and care on the part of the nine Cato directors who voted in favor of seating" the new directors. The suit also seeks a status quo order that would prevent the Cato board from taking any other action outside the ordinary course of its business until litigation stemming from the first Koch lawsuit ends.

Ted Olson was elected to Cato's board at a shareholder meeting on March 1. He attended the March 22 board meeting by phone, but according to the Kochs' most recent complaint, he was not aligned with the bloc that passed the bylaw resolutions. In his affidavit (dated April 9, the same day as the Kochs' latest complaint), he voiced his displeasure with the process in which the new directors were elected.

Olson's affidavit said that board chairman Levy emailed the existing directors about the proposed changes to Cato's bylaws just 72 hours before the March 22 special meeting, when voting on the changes would take place. Because of the timing and content of Levy's emails leading up to the March 22 meeting, Olson said that he had "very little time to consider the proposed resolutions or to fully understand their potential implications." He adds in the affidavit, "I was very disappointed that there were not more materials to support or explain them."