Daniel Schulman’s riveting biography of the Koch family opens with a bang: It is 1950s Wichita, and teenage twins David and Bill Koch are swinging angry punches at each other on the side of a country road.

Such family violence erupts repeatedly in “Sons of Wichita: How the Koch Brothers Became America’s Most Powerful and Private Dynasty.” Despite its subtitle, the book delves less into the Kochs’ sprawling industrial conglomerate and political network than intothe fraught, bitter conflict between the four brothers — a war that cleaves the family for close to two decades.

Schulman hails from liberal-minded Mother Jones magazine, where he works as a senior editor in the Washington bureau. But he sidesteps the two-dimensional caricature pushed by many on the left of the Kochs as malevolent puppet-masters. Instead, his deeply researched book offers an insightful portrait of the brothers, illuminating the personal and political forces that have molded them.

The most dominant influence, in Schulman’s telling, is that of the family patriarch, Fred Koch, an early leader of the red-baiting John Birch Society. Hard-charging and emotionally remote, Fred became a zealous anti-communist after doing business in the Stalin-era Soviet Union. His ideology filtered into the next generation in the form of staunch libertarianism.

With incisive prose, Schulman deftly weaves the remarkable story of the origins of the Koch empire, which began when a young Fred Koch of Quanah, Tex., set off to make his way as an engineer in oil-rich Kansas. The son of a Dutch immigrant, he plunked down $300 to buy a stake in an engineering firm that catered to the refinery business, a savvy investment that made him a fortune. His social ascension was cemented when he wedded Mary Robinson, a Wichita society belle, demonstrating his largesse by taking her on a lavish seven-month honeymoon around the world.

Despite his wealth, Fred Koch was determined that his four sons would not become “country-club bums.”

“He put them to work milking cows, baling hay, digging ditches, mowing lawns, and whatever else he could think of,” Schulman writes. “The never-ending routine of chores was especially torturous during the summer months, when other local kids from Wichita’s upper crust whiled away the afternoons at the country club, the sounds of their delight literally wafting across 13th Street to the Kochs’ property.”

At early ages, the four brothers were locked into competing roles, each reacting differently to their father’s stern temperament. The oldest, Frederick, a lover of the arts like his mother, was soon estranged from his father, who ultimately cut him out of his will. The second-born, Charles, was a rebellious teenager who finally settled down and took over the family business. And the twins, David and Bill, were consumed by a childhood rivalry fostered by their father, who outfitted them with boxing gloves and pitted them against each other.

Much of “Sons of Wichita” is spent tracing the two-decade legal battle between the siblings over control of Koch Industries — Charles and David on one side vs. Bill and, occasionally, Frederick. The fight became so nasty that the brothers at one point hired private investigators to dig up dirt on one another. Bill’s investigators “pilfered trash from the homes and offices of Charles, David, and three of their lawyers, bribing janitors and trash collectors,” Schulman writes.

The family war played out before jurors in a Topeka, Kan., courtroom in 1998, in the case of Koch v. Koch Industries, during which David broke down in tears on the stand recounting his twin’s attempt to assert control over the company. When Charles and David prevailed, Bill told reporters that he would appeal, adding, “These guys are crooks.”

The brothers would not reconcile until 2001, meeting for dinner at Bill’s Palm Beach mansion to sign a final settlement that divvied up their father’s property. It was the first time they had shared a meal in almost 20 years. 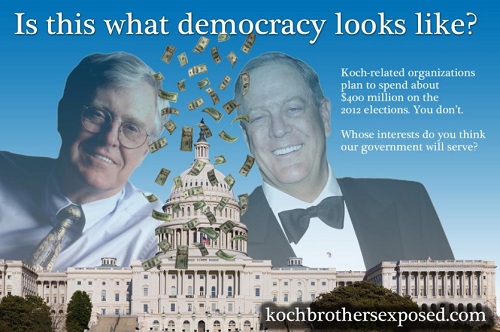 For those who follow the Kochs and their political activities, “Sons of Wichita” does not provide major revelations about how they operate. But Schulman lays out a cogent narrative of Charles Koch’s political evolution, starting as a member of his father’s John Birch Society. When an acquaintance visited the family home in the 1960s, Charles Koch blanched when he saw him carrying a worn copy of Ernest Hemingway’s “The Sun Also Rises.” Hemingway “was a communist,” Charles explained to the guest, who had to leave the book on the stoop outside.

After Fred Koch’s death in 1967, Charles broke with the Birch Society over its support for the Vietnam War. He embraced libertarianism and began bankrolling the movement, helping launch a new think tank, the Cato Institute, in 1977. It was the beginning of what would grow into a far-flung constellation of academic programs, think tanks and politically active nonprofits that now make up the Koch network. (The term “Kochtopus” was coined early on by a libertarian critic who charged Charles with trying to buy the party.)

As his political involvement deepened, Charles initially regarded the GOP with disdain.

“If this is our only hope then we are doomed,” he wrote in a four-page essay in the Libertarian Review in August 1978. “The Republican Party is the party of ‘business’ in the worse [sic] sense — in the sense of business accommodation and partnership with government.”

His libertarian orthodoxy was tempered in the 1990s by a series of legal defeats weathered by Koch Industries, including a record $296 million wrongful-death award related to a leaky Koch pipeline that killed two teenagers.

“The world he lived in was not the libertarian paradise he wanted it to be,” Schulman writes. Suddenly, Charles demanded that his company be in “10,000% compliance with all laws and regulations.” Koch Industries beefed up its lobbying ranks and began to engage in Washington.

But the major turning point came with the 2008 election of Barack Obama. Charles, David and their adviser Richard Fink feared that the new president would push for a modern-day New Deal. And they braced for the kind of intrusive investigations that they had dealt with under the last Democratic administration, when Bill Clinton was in the White House.

The Kochs stepped up their political involvement, largely through their flagship political organ, Americans for Prosperity, which helped organize and drive the tea party movement.

Schulman notes that the Kochs initially tried to distance themselves from AFP’s activities. They were forced into the spotlight in part by the environmental group Greenpeace, which put out what Schulman calls an “effective, if misleading” report suggesting that the brothers’ financial investments on the right were aimed at disputing climate change.

Pilloried on the left during the 2010 midterms, the Koch name soon went viral, with a venom that took the family aback. “The brothers were suddenly the Punch to Obama’s Judy in the partisan puppet show,” Schulman writes.

Four years later, that dialectic continues to frame much of our national political debate.

Schulman spent more than two years reporting and researching “Sons of Wichita,” digging up thousands of pages of archival documents and scoring interviews with family intimates. (Charles and David Koch did not speak to him, however.)

The book has 372 pages of text, which is rigorously footnoted, but it sometimes veers into gratuitous details. Schulman unearths a 1959 letter Frederick wrote to a gay and lesbian organization asking for a list of gay bars and restaurants in Europe. (Family friends told Schulman that Frederick is gay, but Frederick maintains he is not.) The author devotes much of a chapter to detailing the relationship Mary Koch had with an art professor half her age after her husband died. And he exhaustively chronicles Bill’s many tumultuous relationships, including racy faxes he exchanges with one girlfriend.

But the overarching tone of “Sons of Wichita” is fair-minded and inquisitive. Schulman offers carefully observed details that help flesh out our image of the men whose money has so dramatically remade our politics, revealing much about their motives as well as the demons that haunt them.