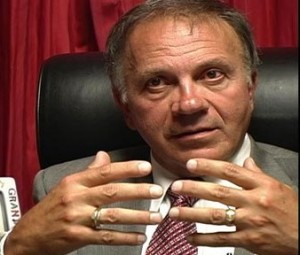 By ThosPayne | Auburn Journal | 2/11/10 01
Former Congressman Tom Tancredo made sure the National Tea Party Convention in Nashville, TN was anything but calm by creating a media firestorm because of its racist tone. He began by blaming the election of President Obama on "the cult of multiculturalism," and continued downhill from there.

"Every year the liberal Dems and the RINO Republicans turned up the temperature ever so slightly. It seemed after awhile that we'd all be boiled to death in a cauldron of the nanny state. And then something really odd happened, mostly because we do not have a civics literacy test before people can vote in this country. People who cannot even spell the word "vote," or say it in English, put a committed socialist ideologue in the White House. Name is Barack Hussein Obama."

It's hard to say which is more disturbing; Mr. Tancredo's apparent call for reviving voting laws that were a lynch pin of Southern white supremacy, or the massive round of applause he received for saying it. Yes, these people really are racists. If there was any doubt, Mr. Tancredo dispelled it. Take for example the ovation Mr. Tancredo got for saying he was glad John McCain lost because McCain was for "amnesty."

"If McCain had been elected, the neocons would be writing flattering editorials in the Weekly Standard and the Wall Street Journal. Congressman Gutierrez and President McCain would have been posing in the Rose Garden with big smiles as they received accolades from La Raza for having finally passed an amnesty."

Much of Mr. Tancredo's speech was channeling Glenn Beck. "Boiled frog" was a giveaway, along with the "committed socialist ideologue" smear.

But as always for Mr. Tancredo, the real battle is defending "white culture."

"Some things we can deal with in just a political way, which is, you know, by the votes we cast. Other things will require a commitment to passing on our culture. And we really do have one, you know. It is based on Judeo-Christian principles, whether people like it or they don't. That's who we are. That is who we are. And if you don't like it, don't come here. And if you're here and you don't like it, go home! Go someplace else!"

Thanks to Mr. Tancredo's incendiary remarks, the Convention did nothing to silence critics who say the teabag movement depends on racial extremists.