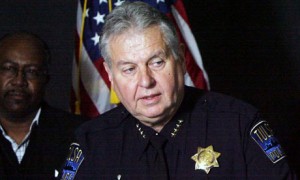 Police said the arrested men were expected to face three counts of first-degree murder and two counts of shooting with intent to kill. He said police acted on an anonymous tipoff.

Police had said previously that they were searching for a white man driving a white pickup, which was spotted close to where three of the shootings occurred early on Friday.

At least two dozen officers were called to investigate the case, along with the FBI and US marshals, in a taskforce named Operation Random Shooter. The arrests came hours after the taskforce was launched.

The shootings placed Tulsa's black community on edge over the weekend. Authorities said they thought the shootings were linked because they happened at around the same time within a three-mile span and all five victims were out walking when they were attacked.

Willingham said authorities still faced many unanswered questions after the arrests. "We are going to turn over every rock," he said.

Okla. — Residents of Tulsa's predominantly black north side said  Saturday they're afraid a shooter is still roaming their neighborhoods looking  for victims after five people were shot — and three killed — a  day earlier.

"We're all nervous," said Renaldo Works, 52, who was getting his hair cut at  the crowded Charlie's Angels Forever Hair  Style Shop on Saturday morning. "I've got a 15-year-old, and I'm not going  to let him out late. People are scared. We need facts."

Police are still waiting for the results of forensic tests, but investigators  think the shootings are linked because they happened about the same time within  a three-mile span, and all five victims were out walking when they were shot.  All the victims are black, and community leaders met Friday evening in an effort  to calm unrest.

"We have to handle this because there are a number of African-American males  who are not going to allow this to happen in their neighborhood," said the Rev. Warren  Blakney Sr., president of the Tulsa  NAACP. "We're trying to quell the feeling of 'let's get someone' and we will  make as certain as we can that this isn't pushed under the rug."

Officer Jason  Willingham said Saturday that police are searching for a white man driving a  white pickup, which was spotted in the area of three of the shootings. At least  two dozen officers are investigating the case, along with the FBI and U.S.  Marshals Service. Willingham said.

"We don't have one definitive way where this investigation is headed,"  Willingham said. "Right now, that's the only thing we have to go on."

Barber Charles  Jones, 40, said the north side has its share of crime trouble, but residents  have never faced a series of random killings like these.

At a neighborhood park a couple blocks from two of the shootings, parents  kept close watch over their kids during an Easter egg hunt.

"Everybody has to just stick together," said parent Wayne  Bell, 47. "It's more of a keep close to the nest thing right now."

Blakney said "avid distrust" between the African-American community and the  police department had raised concerns the shootings wouldn't be fully  investigated, and he contacted police to emphasize the need for them to work  together to avoid vigilantism.