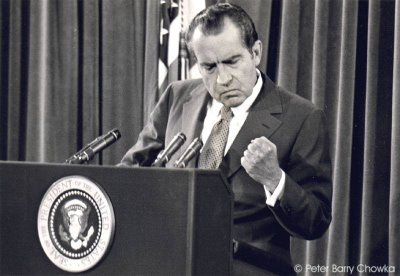 Excuse my eye-rolling, but even in Nixon's prime the Republican soul beneath the self-serving rhetoric festered in ignorance - and it was apparent to an entire counter-culture. But the wilfully-blind wingnut majority actually attributed human qualities to this whacko who attained high office by executing or otherwise side-lining all viable political challengers, including the Kennedys and even a fellow traveller, George Wallace, crippled for life by a programmed killer. Nixon was a vicious fascist. Students on campus burned him in effigy with a "fascist" sign hanging around his neck. They understood who was undermining American ideals. But "conservatives," Good Germans who "knew better," sang his virtues, defended the napalm with Christian condescension, but were silenced, blissfully, by a routine wiretap, break-in and cover-up. Vietnam and collaboration with Otto von Bolschwing didn't do it. A slush fund did. He was a repulsive monster with disgusting opinions - the essence of modern Republicanism. The wingnuts who cheer on these cretins have never learned a thing. - AC

Tape recordings of former US President Richard Nixon have revealed that he believed abortion was "necessary" in mixed race pregnancies. ... After the US Supreme Court had ruled abortion legal, Nixon tells aide Charles Colson: "I admit, there are times when abortions are necessary, I know that." He then gave "a black and a white" as an example and added: "Or rape". ...