" ... In 'Counterexamples to Relativity,' the authors (including Schlafly) write: 'The theory of relativity is a mathematical system that allows no exceptions. It is heavily promoted by liberals who like its encouragement of relativism and its tendency to mislead people in how they view the world.' ... Schlafly brags on Conservapedia that he has homeschooled 185 children. ... " 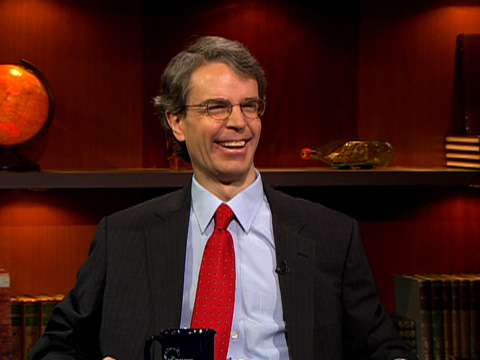 To many conservatives, almost everything is a secret liberal plot: from fluoride in the water to medicare reimbursements for end-of-life planning with your doctor to efforts to teach evolution in schools. But Conservapedia founder and Eagle Forum University instructor Andy Schlafly -- Phyllis Schlafly's son -- has found one more liberal plot: the theory of relativity.

If you're behind on your physics, the Theory of Relativity was Albert Einstein's formulation in the early 20th century that gave rise to the famous theorum that E=mc2, otherwise stated as energy is equal to mass times the square of the speed of light. Why does Andy Schlafly hate the theory of relativity? We're pretty sure it's because he's decided it doesn't square with the Bible.

In the entry, "Counterexamples to Relativity," the authors (including Schlafly) write:

The theory of relativity is a mathematical system that allows no exceptions. It is heavily promoted by liberals who like its encouragement of relativism and its tendency to mislead people in how they view the world.[1]

To what does that reference lead? Why, a note by Schlafly:

See, e.g., historian Paul Johnson's book about the 20th century, and the article written by liberal law professor Laurence Tribe as allegedly assisted by Barack Obama. Virtually no one who is taught and believes relativity continues to read the Bible, a book that outsells New York Times bestsellers by a hundred-fold

Schlafly also points to the Bible as a reason that Einstein's theory must be wrong:

Conservapedia defines "action-at-a-distance" as "Action at a distance consists of affecting a distant body instantaneously. At the atom level, this is known as "non-locality." In non-confusing terms, that indicates the ability to cause something to happen instantaneously in another location (i.e., faster than the speed of light). Since Jesus could, reportedly, do this, thus Einstein is wrong. Schlafly's evidence is John 4:46-54, in which Jesus reportedly cured someone's son just by saying it had happened.

Once more he visited Cana in Galilee, where he had turned the water into wine. And there was a certain royal official whose son lay sick at Capernaum.When this man heard that Jesus had arrived in Galilee from Judea, he went to him and begged him to come and heal his son, who was close to death.

"Unless you people see miraculous signs and wonders," Jesus told him, "you will never believe."

The royal official said, "Sir, come down before my child dies."

Jesus replied, "You may go. Your son will live."The man took Jesus at his word and departed.

While he was still on the way, his servants met him with the news that his boy was living.
When he inquired as to the time when his son got better, they said to him, "The fever left him yesterday at the seventh hour."

Then the father realized that this was the exact time at which Jesus had said to him, "Your son will live." So he and all his household believed.

This was the second miraculous sign that Jesus performed, having come from Judea to Galilee.

Schlafly brags on Conservapedia that he has homeschooled 185 children, all of whom do exceptionally well on standardized tests.

As with Wikipedia and other online crowd-sourced resources, Conservapedia is a colloborative effort of its users and any registered user can post to the site. Schlafly is a frequent contributor to the site, and is identified as the initial author of the entry and well as the editor of the note identified above. Schlafly did not immediately respond to requests for comment.