Enter a Scientology Legal Front & Yet Another Biotech Connection
0 SHARES 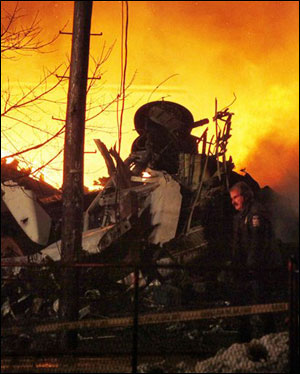 Since ice has been ruled out as the cause of the Flight 3407 crash, legal and media operatives have been hawking the "pilot error" cover story to allay public suspicions of mass murder. One of them is the law firm of Baum, Hedlund, Aristei & Goldman in Los Angeles, echoing nearly verbatim the "explanation" offered by "aviation expert" Randall Brink, among others:

... Attorney John Greaves, of Baum, Hedlund, Aristei & Goldman, is an experienced pilot and airline accident lawyer. He says that there are often many factors that contribute to a plane crash.

Michael Baum is a former staffer with the Church of Scientology's Guardian Office (the Church's secret service operation that preceded the Office of Special Affairs) and Unindicted co-conspirator in the Snow White [IRS infiltration] case which sent eleven Scientologists to prison, including L Ron Hubbard's wife.

He is currently a lawyer with WISE [World Institute of Scientology Enterprises] firm Baum, Hedlund, Aristei, Guildford and Downey, which specializes in cases related to alleged psychiatric drug abuses and airline crashes. His partner, Paul Hedlund, is also listed as an investor with Slatkin, and both men have previously invested together in another controversy-laden Scientologist-owned enterprise, Digital Lightwave.

Michael Kananack was a member of WISE circa 1993. He is a Scientologist who has done some OT levels, as well as the Ls. He was formerly partners with fellow Scientologist, and Slatkin investor, John Coale - husband of Greta Van Sustern - who also made out well in the Slatkin investment lottery. After parting ways with Coale, he hooked up with Michael Baum, Paul Hedlund and George "Skip" Murgatroyd in the firm, "Kananack, Murgatroyd, Baum & Hedlund." http://www.slatkinfraud.com/75_final.htm•••••••AKA Pictures/AKA Movies Inc.

AKA Movies/Kananack with offices in Los Angeles and New York represents independent motion picture producers for the worldwide sale of their product in all media. The company is also involved in film financing, serving as executive producers of independent projects and acquires rights for new media, especially the Internet. "We are recommended as sales reps who have a lot of experience and who can be trusted," says Michael Kananack, VP Sales. "We do one-off deals, selling each movie as we go, and we have no output deals with anyone."

"Harvard Scientific Corp.. The principal objective of the Company is to utilize medically researched and developed drug substances, determine the ability of these substances to be encapsulated in liposomes and determine the potential market for such products. The dysfunction Male Intrameatal, Male Topical, Female Topical, Male Oral and Female Oral products are designed to ameliorate sexual dysfunction and licensed worldwide a technology for the treatment of Psoriasis. During 2000, female sexual dysfunction or a method for female sexual enhancement with the administration to the vagina of a topical cream with the PGE1 compound was patented. The Company operates as a "virtual company" and relies on subcontracting and collaborative arrangements for much of its research and development, manufacturing, clinical trial and marketing operations in connection with its biopharmaceutical products. The Company is in a development stage."

To repeat: "... Michael Kananack was a member of WISE circa 1993. ... After parting ways with Coale, he hooked up with Michael Baum, Paul Hedlund and George 'Skip' Murgatroyd in the firm, Kananack, Murgatroyd, Baum & Hedlund. ... '" http://www.slatkinfraud.com/75_final.htm

.... Arthur Kananack is the former Vice President of Warner Brothers.

The company, AKA Movies, has recently entered into a deal with biotech firm "Harvard Scientific Corp", which is moving away from erectile disfunction treatment and into the entertainment industry:

"Gladiator Films'', added Mr. De Liege, "our low budget direct-to-video, film division has just completed development on its first slate of three films and will begin pre-production of the first film next week. These films have a distribution contract in place through Arthur Kananack's AKA Movies, Inc.'' Mr. Kananack was formerly VP of Warner Bros., a subsidiary of AOL Time Warner Inc., (NYSE:AOL - news) and President of Viacom International.•••••••Harvard Scientific Corp., (OTCBB:VGEN) and the Media

• announced today that it has acquired four entertainment companies located in Miami Beach, Florida, • in exchange for approximately fifty-one percent and controlling interest(approx. 14-million shares) of its total issued and outstanding common stock. Three of the four companies, Four Starz Holdings, Inc. (www.fourstarz.com), Gladiator Films, Inc., and Four Starz Productions, Inc., have combined tangible assets in excess of $10.6 million which includes film inventory, story rights, film distribution and pre-sale executed contracts. The fourth company, La Playa Studios, Inc., is currently designing a $150-million state-of-the-art film, television and music-recording studio to be built in the heart of South Beach, (Miami Beach, Florida), in conjunction with Dade County. The Company has secured complete funding for the studio project and expects to make other details available to the public, shortly. The total assets of all four companies are being transferred to Harvard Scientific at this time; a process expected to be completed over the next several days. ...

Political Intimations of an Orchestrated Epidemic Before Swine Flu