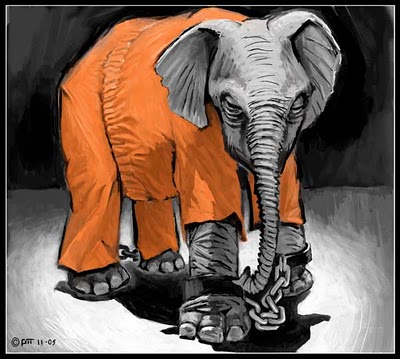 Florida Republican leaders are struggling to contain a brewing scandal within the state party by shifting money and dodging questions. Too many of them believe stonewalling will silence critics who include many of the party's own grass roots supporters. It's time for state and federal authorities to investigate to determine if campaign finance and tax laws have been broken.

The most obvious question is whether state Republican Party staffers, leaders and elected officials misspent political contributions for personal gain — and should have paid taxes on that compensation. Millions of dollars in soft money has been raised by the party in recent years. Much of it, apparently, went to pay American Express bills that were never fully disclosed in campaign finance reports. While state law requires such transparency, an elections division ruling let the party off the hook.

Did outgoing chairman Jim Greer and former executive director Delmar Johnson do more than violate the party's trust when they entered into a secret contract that provided Johnson $408,000 in compensation in 2009? At least one former general counsel for the party has suggested the secret deal broke a state law that prohibits a political party chairman or treasurer from knowingly making "a false or improper accounting for" political money.

Then there are the actions taken as confidence in Greer evaporated. Last month, two rising legislative leaders — House Speaker-designate Dean Cannon of Winter Park and Senate President-designate Mike Haridopolos of Melbourne — transferred nearly $1 million from the party's accounts to political committees they controlled. Apparently, it was with Greer's approval. But since 1989, state law has expressly forbidden elected officials from raising unlimited dollars for so-called leadership funds to advance their favored candidates and agendas.

Now Attorney General Bill McCollum, despite knowing about the secret contract and the transferred funds for more than a month, is resisting calls for an external inquiry. He's content to let the next state party chairman, due to be elected this weekend, conduct an internal audit before calling the authorities in. Surely many of the entities that the attorney general investigates wish they were given such leeway to clean up their books. McCollum's office is likely not the appropriate state agency to investigate — a state attorney, statewide grand jury or the Florida Department of Law Enforcement would seem more likely — but his answer suggests he's more interested in saving the party embarrassment than getting at the truth.

Once again it's clear Tallahassee can't be counted on to police itself. State and federal investigators should conduct an independent examination.